Pennesi grew up in Massachusetts, but has fallen in love with north-eastern Minnesota since moving there several years ago. Photos: TNS

Ryan Pennesi has a favourite spot near Minnesota’s Tettegouche State Park in the United States, where he hit the jackpot with wildlife sightings – near a creek crossing.

Well, not sightings so much as trappings. And not trapping like grab the animal by the leg but camera traps, a fancy name for a fancier version of the ever-popular trail camera. In that one spot Pennesi’s camera captured deer, wolves, coyotes, red fox, grey fox, snowshoe hare, ruffed grouse, squirrels and a badger.

Of course Pennesi never actually saw any of them. They just showed up on his little memory card when he went back a few weeks later to pull the card, stick it in his laptop and see what had happened while he was gone.

Or maybe part of a bear just before the bear tries to take the camera down. One of his Pelican camera cases has permanent bear tooth marks in it. One time a bull moose attacked one of Pennesi’s camera traps.

“I didn’t realise it at the time but I had put it right on a scrape tree. So I’m not sure if he did it by accident as part of his mating thing or if he smelled human and was going after it on purpose, ” he said.

But Pennesi still gets a thrill whenever he returns to his camera trap to check.

“To me it’s like Christmas morning whenever I open up that camera, ” he said.

Pennesi is part of a growing community of outdoor researchers and photographers who are using camera traps to be their eyes in the woods, to be in two or 20 places at once and get definitive evidence of wildlife behaviour, or just wildlife existence in a specific place. 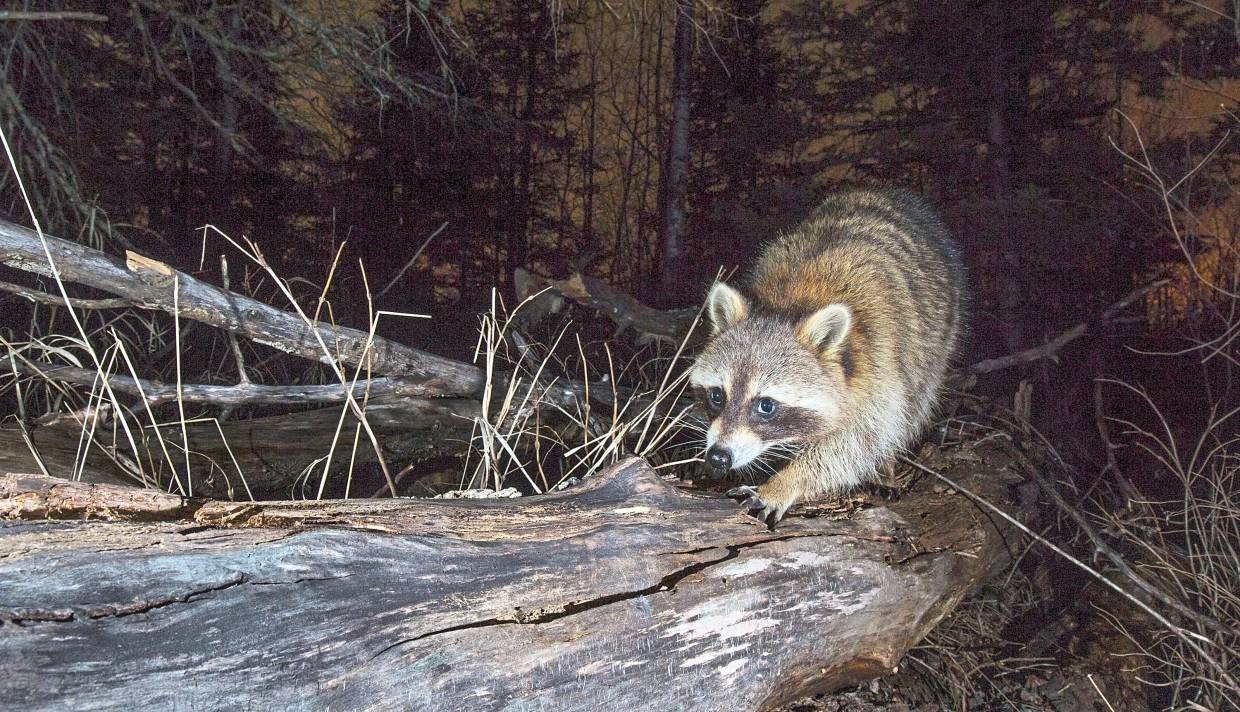 A raccoon walks up a log over a creek, a common location to capture animals on camera traps.

Cloquet hunter Sean Hall built his first homemade camera trap in 2007, using inexpensive, used point-and-shoot digital cameras, and went on to capture stunning images of all sorts of critters near his deer camp, including drumming grouse, otters, wolves, bobcats, beavers and deer. He had so many interesting images that he turned them into wildlife calendars.

In recent months we’ve seen verified trail camera footage of cougars in north-western Wisconsin, not once but twice.

And the Voyageurs Wolf Project has captured both still and video images of wolves in Voyageurs National Park in landmark, never-before-seen situations, including a female wolf rescuing its pups from a flooding den and Minnesota wolves catching and eating fish out of a stream. (From just one camera over a few weeks – placed on a portage between Namakan and Sand Point lakes – the Voyageurs researchers collected images of multiple bears, three wolves, fox, flying squirrels, red squirrels, a pine marten, a flushing grouse, a bobcat, raccoons, bugs and some cussing canoeists portaging through mosquitoes and mud. Eventually, a bear bumped the camera so it only captured video of treetops and sky.)

The outdoors as sanctuary

Penessi grew up in central Massachusetts, spending much of his childhood outside “catching frogs and salamanders”. He admits to being a “social introvert” who got nervous in public settings and would recharge by going into the woods.

“The more time I spent in the woods, the more I discovered that it was a part of my identity, ” he noted. “Wild spaces became a sanctuary for me in my youth.”

He happened into north-eastern Minnesota somewhat by accident, but now can’t imagine leaving. In addition to photography (he’s self-taught, with help of mentors but no formal training) he’s also taken up deer and grouse hunting.

“I’ve fallen in love with this area. It has so much to offer if you like wild places, like the outdoors, ” he said. “And the North Shore is one of the most photogenic places in the world.”

Pennesi, 29, has a degree in wildlife and fisheries conservation from the University of Massachusetts at Amherst. He and his fiancee (a Minnesota girl, another reason not to leave) live in the woods between Silver Bay and Finland. His day job is a forest restoration specialist for the Superior National Forest’s Tofte District, helping plan and orchestrate tree plantings in logged areas. But his passion is photography, especially using advanced digital single-lens reflex camera (DSLR) to make high-end camera traps.

Pennesi started using trail cameras to monitor wildlife in college. His first setup was on a deer carcass and he was “astounded” at how many critters showed up to scavenge – including fisher, coyote, barred owl, mink and fox. He’s been hooked on remote cameras ever since. A drumming ruffed grouse captured on a camera trap placed by Pennesi.

In 2013 and 2014, when he worked at Wolf Ridge Environmental Learning Center near Finland, Pennesi would ask the students to form a hypothesis about what animal lived in a certain burrow in the ground, or what animal was visiting a specific tree or leaving a track. Then they would put up a trail camera and wait for the visual confirmation.

“They make a really good teaching tool, ” Pennesi said of trail cameras. “The students like the technology and the photos pull them into the natural world, to wildlife.”

About five years ago Pennesi began to dabble in homemade camera traps using high-end digital cameras, remote flashes, a passive infrared motion/heat sensor hardwired to the camera’s shutter and a hard, waterproof camera case. He uses wide-angle lenses – between 10mm and 35mm – that can take in a wider field of view, a little more forgiving when you don’t know exactly where your subject is going to show up.

“Most of the time I’ll think I know how it’s going to happen. But 90% of the time the animal does something that’s not at all how I imagined it would happen in my head, ” he said.

When it works out, the high-end cameras, with more megapixels and higher resolution, offer a much sharper image that can be enlarged and still look good. The DSLR also allows more flexibility in aperture opening and shutter speed. It’s a lot more expense: Good trail cameras can be had for US$100 (RM420) or less. A decent DSLR camera trap setup can cost nearly US$2,000 (RM8,400).

“I’m essentially putting a photo studio out in the woods, ” Pennesi noted, adding that, so far, no humans have stolen any of his camera gear. “People do notice them sometimes I have found a few images of humans doing poses that I didn’t want to see.”

But there’s a payoff for the bigger investment. Most trail cameras are between three and 10 megapixels (although some newer models have more) while modern DSLRs can have 20,30 or even more megapixels. The DSLR setups also allow better, broader use of flash, and some of the images Pennesi gets are nothing short of dramatic – portrait-quality shots, often at night, of critters in the wild that look like studio shots of stuffed animals.

If all you want to know is how big the buck is walking past your deer stand, Pennesi notes, modern trail cameras are great. But if you want to do something more with that image, the images can fall short. One of Pennesi’s goals is to sell his most dramatic camera trap photos, either as art or to wildlife magazines. But his primary motivation is using his camera traps to further science, conservation and public outreach.

“My goal is to use the images from the camera traps to help conservation efforts. To help bring research to people, to make it more accessible and useful to help people understand what’s going on in the natural world, ” Pennesi said.

Some of what’s going on is just plain interesting, like the apparent influx of grey fox and badgers into the Arrowhead region Penessi’s camera traps have captured. But others, while also interesting, might be a sign of a changing climate or other human-caused trouble for wild critters.

“We have a huge opportunity here to use photographs of animals in the wild to help tell their story and help get people involved,” Pennesi said. A camera trap is “not just an important research tool. It’s an important outreach tool. – Duluth News Tribune/Tribune News Service