It goes without saying that the August rockers formed their group in their favourite month – August, in 2011. They also registered their company in the same month. And, it is also the month where they got matching tattoos to mark the milestone event.

This year, the band celebrate its eighth anniversary of playing together as a band with its first major concert on Aug 30.

“We do a lot of crazy things in the month of August, that’s why we are called Mad August,” Kit laughed. “But, more than that, we want to ‘Make A Difference’, and coincidentally, that is what the acronym ‘MAD’ in Mad August is all about. ”

Although the guys admit that they are “mad” about music, they want to stress that the “Mad” in the name of their band means more than that.

The acronym Make A Difference means that they want to channel their efforts into doing meaningful things that make a difference in their lives as well as in the lives of others around them. Also, they are quite different from the usual local Chinese rock band.

The four may sing almost exclusively in Mandarin, but their band does not have a Chinese name and half of the members are not even Chinese-educated. Jim and Jeff can read and write Chinese but Kit and Peter cannot.

And, having a vocalist who doesn’t read the language he sings in does present a different kind of challenge for the band.

“I have to make notes in pinyin, even for my own songs. But, I am willing to take the challenge, because I want to make a difference,” stressed Peter, who used to sing in Malay and English before Mad August was formed.

Another thing is the band leans heavily into environmental issues. “The language of rock is naturally expressive and straightforward, so it is especially suited to the delivery of our intended message about protecting the environment,” said Jim.

Fans of the rock band can look out for Mad August’s upcoming third album which has already seen three singles released in recent months.

“All of our songs are about true life experiences, our experiences. It’s more meaningful this way. We want to have a diary to document our memories. One day, when we grow old, we can listen to our old songs (and reminisce),” mused Kit.

The tenacious musicians admit that it has not been easy for they had spent that past eight years fighting for a platform to showcase their music and a stage to connect with their supporters.

“Making rock music is not easy. One of the biggest challenges of playing in a rock band is getting a stage to perform,” sighed Jeff, who is the group’s lyricist.

The four contended that it is always a challenge to win over event organisers who would rather engage solo singers compared to a fully-equipped rock band.

Unlike solo artistes who only need a microphone and a minus one track, a rock band requires a better sound system, a whole bunch of musical instruments and enough space to set out their equipment, they added.

“When we bring all our instruments and the equipment that we require for our show, (the organisers’) immediate reaction is that we have too many things and it is too troublesome for them,” Jim added.

Even so, with the odds heavily stacked against them, the four soldiered on. Even when their publicist advised them to give up, the guys refused to throw in the towel.

Fortunately, the efforts, sweat and tears finally paid off, when Mad August was named the Best Band at the 2016 AIM Chinese Music Awards, organised by the Recording Industry Association of Malaysia (RIM).

Now that they have secured a stage for their first ticketed concert, the guys are determined to give it all they have got. Hence, the concert is titled Fighter, which symbolises the band’s challenging journey in the local music scene. The concert theme song title Gan Dong means daring to take action.

“The song tells of our struggles for the past eight years. It seeks to offer encouragement to those who are chasing their dreams. Our advice is to stay focused on your goal in order to remain motivated so that you can continue to work hard no matter what obstacles or setbacks you may encounter,” said Peter.

For a group that has already notched up more than 400 public performances over the years, preparing for its first major concert is probably a walk in the park.

Being fitness ambassadors for Celebrity Fitness, the four get their fitness regime specially tailored for them by personal trainers so they are already in enviable shape.

But, Kit insists that they still need to step up on the stamina training. “Concerts are normally two hours long, while shows are usually just 45 minutes. So, there is a huge difference.”

Perhaps, one of the biggest departure from norm would be their choice of costume during the show. “We discovered that we have fans who are young children. Small kids like rock music, too.

“So, when deciding on the colour scheme for the show, we went with colourful outfits instead of the usual all-black ensemble that people are accustomed to seeing us wearing,” Kit explained.

Looks like the guys are all set to bring the house down.

Mad August Fighter Concert 2019 will be held at Wisma Bentley Auditorium, Mutiara Damansara, Petaling Jaya on Aug 30 at 8.30pm. Tickets are priced at RM200 and available from Madaugust.pouchnation.com or 03-2201 4458. Each ticket comes with one general admission, one limited edition Mad August compilation album and one drink. The official radio station for this concert is 988, which is part of the Star Media Radio Group. For concert details, visit Mad August on Facebook or Instagram or Youtube or tune in to 988. 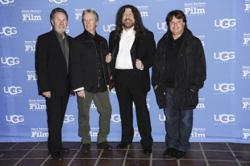