After tirelessly pursuing a music career for 13 years, pop and classical singer Dewi Liana Seriestha is finally seeing the fruits of her labour.

Dewi was only 16 when she got her start as a contestant on the first season of the reality singing series, Mentor, and was placed under the tutelage of powerhouse vocalist Liza Hanim.

But appearing on the show didn’t mean instant stardom for Dewi.

After secondary school, the Kuching native moved to Kuala Lumpur and spent four years honing her craft in performing arts school Aswara (Akademi Seni Budaya dan Warisan Kebangsaan). While pursuing a diploma in music (vocal classical), on the side, Dewi sang at private functions and dabbled in acting to pay the bills.

“I definitely struggled a lot,” says the 29-year-old, who is of Indonesian, Chinese and Bidayuh descent, about her early days as a singer.

In fact, it was only in 2014, nine years after her foray into showbiz, did she receive her first big break.

“In July 2014, I represented Malaysia at the World Championship Of Performing Arts (dubbed the ‘Olympics of Performing Arts’) in Los Angeles and won six awards in the vocal categories,” she recalls.

“A few months after that, I represented Malaysia in Miss World 2014. There were various subsidary titles up for grabs and I had my eyes set on the Miss Talent title.

“At first I didn’t know if I could carry the song (an operatic number from The Phantom Of The Opera) but I worked very hard and practised for three hours each day with vocal coach Syafinaz Selamat.”

In the final round of the talent portion, which was televised globally as part of the beauty pageant’s grand finals programming, Dewi outshone Miss Scotland, and won Miss World Talent.

The international achievements opened the doors to various opportunities in hosting and modelling as well as her first love – singing. Dewi signed with Warner Music Malaysia in 2015.

“The moment I came back, Warner reached out to me. I was incredibly honoured because it means that they felt I was good enough to be a part of an international music label.”

Dewi released her first single from a major label, Seindah Berdua, last year. While the song got off to a slow start, it has certainly made its presence felt.

Her years of hard work finally paid off when the ballad came out among the top 30 songs in the country that made it to the semi-finals of Muzik Muzik, a prestigious song competition, recently.

“It’s one of my biggest dreams to have a song on the semi-finals of Muzik Muzik. That song is special because it combines pop and classical elements,” she says.

Interestingly, her recent career milestone was witnessed by a familiar face on stage. In a full circle moment, Dewi performed against the very same singer who mentored her on the reality show where she got her start – Liza Hanim (her song Mimpi was also among the top 30).

She adds that her mentor had some words of encouragement for her. “Liza told me she knows I’ve been through a lot, and she’s proud of me for all the things I’ve achieved over the years.” 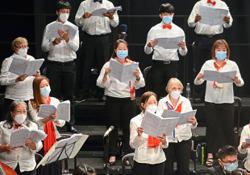