What happened to Chris Colfer from 'Glee'?

Chris Colfer's The Land Of Stories: The Wishing Spell was released in 2012. Photo: Filepic

In the end, surprising as it was, Kurt Hummel and his high-school sweetheart, Blaine, were married and expecting a baby – with their friend Rachel Berry serving as a surrogate.

Beyond that, Chris Colfer hasn’t wondered much about the character he played for six seasons on Glee – a role that won him a 2011 Golden Globe, two People’s Choice Awards and two Emmy nominations.

“I don’t think about it at all, and I know that’s going to break many Glee fans’ hearts,” Colfer said on the phone. “I think I was so shocked that he was married with a child at 24 that I ceased to imagine any further.

“That’s a little early. I hope kids realise that that was just maybe a little bit of an exaggeration.”

In truth, “kids” might not know Kurt Hummel at all.

Since the Fox series ended in 2015, Colfer has made more of a name as a best-selling author of a series of books for middleschoolers called The Land Of Stories. Colfer, 27, has been writing since he was very young – first as a way to pass the time after he underwent lymph-node surgery and spent three months in the hospital recovering – and then as a way to escape the bullying that forced him to be home-schooled in the seventh and eighth grades.

The stories revolve around a set of twins, Alex and Conner Bailey, who magically travel through a book of stories and come face-to-face with the fairy-tale characters they grew up reading about. The first book, The Land Of Stories: The Wishing Spell, was released on July 17, 2012, and spent two weeks at the top of The New York Times Best Seller List’s Children’s Chapter Books Category. Each of the four titles that followed have charted at No. 4 or higher.

“I never thought the series would become what it’s become, and that’s wonderful,” Colfer said. “I think 99% of my readership are too young to have remembered Glee. They could care less that I was an actor.

“It’s funny. Being on television really gave me a great platform to become an author, but it really was an uphill battle. For every one person that you have buy your book, many will have refused because you were an actor on television.”

And yet, he got offer after offer to write a memoir because he was an actor on television – and turned every one down.

“I’m only 19, and that’s not a good idea,” he said. “There’s so much celebrity content that it took a lot for me to even get my publisher to agree not to put my photo on the back of the book.”

He writes in the guest room of his Laurel Canyon home, at a red desk with twin beds – one with a Star Wars coverlet and the other with Mario Bros. (“It’s a glamorous life.”)

But in truth, he writes every day, everywhere. “Sometimes I don’t have a pen in my hand or a computer opened up,” he said.

“But I am always generating stories in my head. Whether I do anything with them or not is the battle. I have no idea where it all comes from. I am just thankful that it comes.”

Chris Colfer's The Land Of Stories: The Wishing Spell was released in 2012. Photo: Filepic

This sixth book is not necessarily the end of the Bailey twins.

“I always want to hold onto the right to change my mind,” he said. “I may come back and do a series that takes place in the future, or a prologue that is based on their grandmother’s life. I’ll never be able to answer whether this is it.”

He has partnered with 20th Century Fox to adapt the first Land Of Stories book into a film. Not only will Colfer write the script – he will make his directorial debut with it.

At some point, he is going to have to cast the twins.

“I have thought about it ever since we started having the film talks,” he said. “The people that pop into my head that I want for the film are very lightly known and then become huge stars.”

So he may have to go with completely new faces – which is what Colfer was when he auditioned for Glee without any professional experience.

“I have had a long line of beginner’s luck,” Colfer said, “which I hope continues for a long time.” – The Seattle Times/Tribune News Service

What happened to Chris Colfer from 'Glee'? 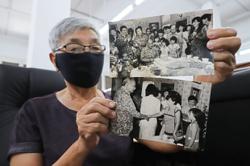