Michael Chong is the fix-it guy for social problems 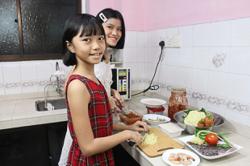 MCA's Head of Public Services and Complaints Department Chong (centre) having a discussion with his assistants, from left: Ting, Foo, Chang and Lee. Photos: The Star/Azman Ghani

In this age of caller ID, most people hesitate to take calls from unidentified numbers to avoid pesky telemarketers, insurance agents ... or worse, a former flame.

But MCA’s Head of Public Services and Complaints Department Datuk Seri Michael Chong makes it his business to answer every call that comes through his mobile phone.

The year 2017 marks 30 years of Chong helming his department. In that time, he has answered thousands, if not millions, of phone calls – at all hours of the day and night.

“You’ll never know how urgent the call is until you answer it. It could be a case involving a child needing blood transfusion or someone requiring urgent financial help. I’d feel guilty if these calls went unanswered,” says Chong during an interview in Kuala Lumpur on Wednesday.

It’s this heartfelt dedication that has earned Chong a reputation as the one to go to for help – especially for the most desperate.

Through his selfless deeds, its not wrong to say Datuk Seri Michael Chong has a heart of gold.

Press conferences he has held highlighting social problems such as gambling debts, conflicts, runaway spouses, cheating mediums and all kinds of everything are testament to the ills plaguing society. Chong’s work has been to help victims and families torn apart by problems to sort through their mess. He also alerts the public to potential risks and dangers out there.

At his office, located on the 7th floor of Wisma MCA on Jalan Ampang, Kuala Lumpur, Chong has to sift through stacks and stacks of case files every day and decide who to help and how to tackle the problem at hand. He determines the level of intervention and the authorities that need to attend to the problems.

It’s tough work. But he has the full backing of his team, which includes his eldest daughter Marina. Other team members are Lee Xiao Lin, Cherry Chang, Jenny Ting and Foo Sek Cheng who are on standby 24-7 to assist him.

In a day, Chong sees about 10 to 20 people.“It gives me a sense of satisfaction to help solve people’s problems. It keeps me active and mentally alert at my age. Teamwork is equally essential and I’m blessed to have a dedicated group who work tirelessly to ensure the department’s smooth operation,” says Chong, who joined the MCA in 1980 as executive secretary to former MCA deputy president Tan Sri Lee Kim Sai, then a Selangor state executive councillor.

But these days, Chong is accompanied by Marina, who has been his personal assistant for seven years.

The 33-year-old was inspired to work with her father due to his selflessness in helping people. Joining Chong’s team has given Marina a deeper understanding and respect of her father’s job scope.

“When I was younger, I couldn’t comprehend Dad’s busy work schedule or understand why he worked long hours. Nowadays, I accompany him to his meetings and try to help in any way possible,” says Marina, the mother of 11-month-old baby Matilda Leong.

Marina has always known that although Chong is stern at work and home, he has a heart of gold.

“Dad always puts others before himself. It’s apparent in the work he does and he will go to great lengths to ensure he helps anyone he can. I believe his selfless acts have rubbed off on me,” she explains.

Marina is also all the more appreciative of her father’s efforts to juggle his work and family time. Despite Chong’s busy schedule, Marina says he always makes time for the family. Highlights include having dinners together, particularly trips to Klang for Chong’s favourite bak kut teh.

“Dad enjoys reading the newspaper end-to-end and books on general knowledge and history. During his free time, he loves to watch TV, especially documentaries on History Channel and National Geographic Channel.”

A privilege to help

There is a sense of gratitude when Chong talks about his passion to help the needy.

There’s nothing more fulfilling than reaching out to help those facing difficulties, says Chong who hails from Batu Arang, Selangor.

His empathy and compassion for the sufferings of others are rooted in his early years of hardships.

Chong grew up in a poor family. When he was 17, his father died of cancer leaving his mother, a washer woman, to fend for six children.

In their most dire times, parishioners from his hometown’s St Michael’s Church came forward to help Chong’s family. Even teachers from his former school, SMJK Batu Arang, chipped in to ensure the family could make ends meet.

“I know what it’s like to go hungry. We had no money to buy food and our Indian neighbours came forward to help us. This taught me how to reach out and help others in need,” said Chong, citing his former school principal J.R. Raman, church volunteer Albert Fenelon and former boss Tan Sri Lee Kim Sai, as some of his role models.

True to his motto of service above self, Chong has tirelessly reached out to help others. He has dealt with pimps, children requiring medical assistance and girls forced into prostitution. Over three decades, he has successfully solved at least 35,000 cases.

But even though Chong is full of convictions and well-supported, there were times when he had considered quitting. In 1989, he was bashed up by a pimp, which resulted in a broken arm.

“At that point, I felt like resigning. But my MCA comrades urged me to continue the good fight,” said Chong, whose work has included bringing back a body of a stewardess who died in Jeddah and rescuing a young girl sold to the flesh trade.

Concerning whispers of bribery, being conned on the job and being offered sexual favours in exchange for his help, Chong says: “I can’t deny that. But I don’t entertain such requests. Essentially, it’s all about working in a fair manner and not being enticed by material things.”

Being at the centre of conflict resolution has also influenced Chong’s relationship with his family.

“Everyone has family problems and it really boils down to communicating and working together to find a resolution.

“Luckily, my wife, (Datin Seri) Magdeline (Lim) is a loving and understanding person who has been my pillar of strength. She has helped raise our kids and has stood by me through thick and thin,” says the father-of-four just as his cellphone starts ringing. Chong immediately answers the call and soon starts jotting down notes.

The scariest case: He was confronted by triads when he helped a Malaysian girl, who was kidnapped and forced into prostitution in Macau, to escape. Thankfully, with the help of TV reporters and the Malaysian embassy in Macau, they both managed to return home safely.

Most touching case: When he helped to bring back the ashes of Malaysians who died while working illegally in Japan, with the help of fellow Malaysians living in Japan.

Best reminder: A road bully twisted facts and sought help from Chong, pretending to be the victim. A few days later, the real victim came forth with the truth after recovering from his injuries, causing Chong much embarassment. That incident served as a reminder to Chong to be more alert and careful when handling cases.

Most regrettable case: A person who owed loan sharks money sought Chong’s help, requesting to just pay the debt and not the accumulated interest. But he blamed Chong when he was not able to help him.

It is important to help those in need,” says Chong.

Every year, a hero

May 2010: Chong held a press conference to warn all men named Michael to be careful of an attractive model known only as Ah Mei. She had claimed that every Michael in town had cheated her of cash and jewellery.

August 2001: A girl resorted to bathing with her clothes on, as more cases of fathers making sexual advances to their teenage daughters were reported. Chong’s help was sought by two complainants to counsel their daughters who were traumatised by such reports.

March 2001: Chong claimed he had successfully “cast a spell” and recovered money from a monk who cheated a couple of more than RM40,000. After the couple approached Chong for help, Chong issued a “talisman” by stamping his Chinese name on his business card and told them that the stamp will cast away bad spells. The monk went to Chong’s office to offer a settlement after the story appeared in the papers.

December 1998: Chong set up a fund for Liaw Gin Hui, then 10 and Gin Chyi, then eight, to help the two sisters live with their grandmother and to ensure their welfare was looked after. They had been abandoned by their father since 1993 and their mother had commited suicide.

February 1997: Malaysian workers returned from Taiwan with their new “wives”. The Malaysian first wives complained of being bullied by the new “wives” and sought Chong’s help to become “number one” again.

February 1997: Chong flew to Macau to rescue a 17-year-old Ipoh girl who had been forced into prostituition in Macau.

February 1992: Chong had over 10 complaints of Malaysian men losing their wives in Japan. These couples had gone to work illegally there, and the wives had either run away, lured into vice or were involved with other men while they were in Japan.

Michael Chong is the fix-it guy for social problems