Life has changed drastically for Olympic silver medallist Goh Liu Ying. She was barely known before the 2016 Rio Olympics, but these days she is recognised everywhere she goes.

Malaysians cheered whole-heartedly for our athletes at the games and they have a lot of affections for young badminton players like Goh. Wherever she is, people approach her for photos, selfies or autographs. They just want to congratulate her.

Sometimes, passers-by just stop her to confirm that she is indeed “Goh Liu Ying, the Olympic medallist”.

It’s flattering, she concedes. But for the shy and soft-spoken shuttler from Malacca, it’s also very overwhelming.

“It’s my hair!” says Goh with a soft toothy smile, her eyes twinkling as she talks about her new-found fame. “People tell me that they recognise me because of my hair and my earrings. I can see it as it’s happening; when I pass by or enter a restaurant, I immediately see people do a double take first. Then they whisper to each other and then some would approach me... I’m going to cut my hair!” she wails in mock despair.

She is referring, of course, to the edges of her shoulder-length bob that are dyed blue – it’s fading, but not quickly enough. Her other trademark are a pair of dainty, dangly pearl drop earrings which she bought from Paris a few years ago because, “I’ve always loved dangly earrings”.

Goh, 27, is slowly coming to terms with the scrutiny that comes with her success. Life as an Olympian is certainly different. It’s not an exaggeration. The Star’s photography session was held late in the evening but some of our younger colleagues stayed back to meet her. Shy but gracious, Goh patiently took photos with them all even though the strains of a long day of training were beginning to show on her flawless face.

'People tell me that they recognise me because of my hair and my earrings,' says Goh.

Goh has been on the national team for eight years but peaked at the Rio Olympics. Winning the silver medal was even more awesome than she’d imagined.

So it was definitely a sweet surprise when Goh and Chan smashed their opponents one by one.

Malaysians went wild with excitement and the entire country swelled with pride as the pair thundered their way into the finals to fight for the country’s first Olympic gold medal. It put mixed doubles at the forefront of badminton for the first time in history.

The Olympic gold medal remains elusive. But for Goh, Rio was a dream come true. Getting into the finals was something she had dared not dream about.

“After we scored the win in the semi-finals, I went into shock. Did we just win? My mind went blank for a moment and I just followed Peng Soon as he walked off the court to meet our coaches. I couldn’t think. I couldn’t believe it. I mean, we did it!” shares Goh, her eyes dancing with excitement as she re-lives the moment.

“You can’t understand how it felt. I felt like I was dreaming. To be in the Olympics and then to be in the finals and to actually stand on the podium...” she trails off. I didn’t sleep at all that night. I was happy; I am happy.”

Needless to say, Goh sleeps with her silver medal beside her on her bedside. She picks it up and looks at it every day, often more than once. “It’s my most precious possession,” she says, beaming.

Overnight, Goh and Chan have become the new darlings of the court. All of a sudden, everyone wanted to know who the petite beauty with the blue-tipped hair was.

Here are 5 things you may not know about her:

1. She has an online shop – liveyourlife.my – which she started with fellow shuttler Lim Yin Loo three months ago. Each T-shirt tells a story and was inspired by their lives as badminton players.

2. She has a tattoo on the index finger of her left hand that reads "Destin", which means fate in French.

3. She hates romantic movies and prefers action movies or crime thrillers which gets the adrenalin going.

4. She enjoys videogames, her favourite being Counterstrike, a series of multi-player tactical shooter games.

Pokemon Go? Not a fan.

5. When she’s overseas, she misses Malaysian food — her favourites being Assam Laksa, Nasi Lemak and Char Kuay Teow. The best food for her are from Malacca, of course. 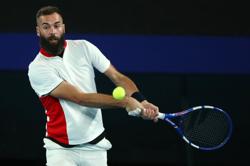