This woman may know a way to solve social problems

Mastura Mohd Rashid is clear about her goal. It’s to eradicate poverty through her social enterprise, The Nasi Lemak Project.

“I want to help at least 40 families get out of poverty by 2018. And, I want to show Malaysians that social enterprise isn’t charity but a viable business. We can help (the disadvantaged) improve their lives and income while making money ourselves. Charity isn’t about just giving people stuff,” says the 26-year-old who radiates cool without having to try.

Mastura, who holds a Bachelor of Human Sciences in History and Civilisation from the International Islamic University Malaysia, worked for a year in an Oil and Gas company before leaving her nine-to-five job to focus on her social enterprise.

“When I was an undergraduate, I wanted to be a lecturer. I was quite a good student ... well, until I started The Nasi Lemak Project, after which I started failing all my subjects. No, really I failed five subjects in my last semester,” she says without batting an eyelid.

“Now, what I want is to make an impact,” she says firmly.

Mastura started The Nasi Lemak Project in 2012 to promote volunteerism as a way of eradicating poverty. Their focus was the urban poor. They started by feeding the city’s poorest of the poor – the homeless. 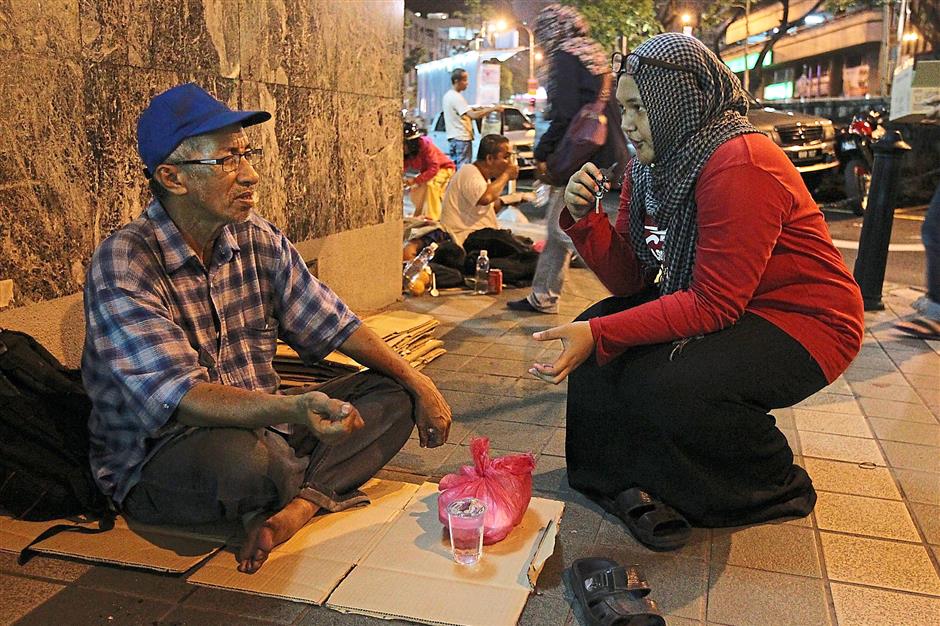 Mastura started her social enterprise called The Nasi Lemak Project to help the homeless and urban poor; not just to feed them but to be their friend and help them off the streets. Photo: The Star/Glenn Guan

“I wanted to create the culture of volunteerism among youth. Not one-off volunteers but those who can commit to a cause and volunteer on a long-term basis. I wanted to make volunteerism fun. So we started with street feeding because what is more fun that going out at night, right?” says Mastura frankly.

Mastura and her team would go down to the streets thrice a week not just to feed the street dwellers but to build good rapport with them. They want to help the homeless get off the streets. Her programme drew a lot of attention and she received funding which she used to start several other projects for marginalised communities.

Among them are Edu Rangers, a voluntary programme to give Maths and English lessons to children from urban poor families; Stingarden Theatre, a programme to help urban poor children master English through theatre; Pixel Garage which equips disadvantaged youth with skills in graphic design and the Unemployment Lab that prepares youth for employment by helping them with their resumes and giving them grooming lessons.

The programmes were run with the help of some 700 volunteers registered with The Nasi Lemak Project.

Also read: This young doctor quit her job to help those in need

Last November, Mastura converted The Nasi Lemak Project into a social enterprise to make it sustainable and far-reaching. Instead of street feeding, they gave urban poor families the opportunity to earn money by making nasi lemak. Mastura and her partner Zul Imran Ishak educated the cooks on food safety and hygiene. They also emphasised the need for consistent quality control.

The families were then given a one-year contract to provide The Nasi Lemak Project with 50 to 100 packets of nasi lemak daily, which are distributed to vendors. They were also taught book-keeping and are required to save 20% of their earnings. They are currently working with five families but have identified another 15. Each family uses their own nasi lemak recipe but Mastura and Zul make sure that they quality of the food is consistent.

“Yes, I taste every batch, every day,” says Mastura, 26, gesturing with a laugh at her waistline as evidence of her stringent quality checks. She laughs at herself, adding: “Our nasi lemak is homemade and delicious. It’s authentic nasi lemak. Although each family has their own recipe, each one is really tasty and we make sure they maintain the quality.

“We want people to immediately think of The Nasi Lemak Project when they want a packet of good nasi lemak,” says Mastura who grew up in the small rural town of Benut in Pontian, Johor, with her younger brother and sister. Her parents were doctors who were more keen on serving their patients than making money.

“My parents would often only charge their patients for their medicine. So, even though we were doctors’ children, we lived a simple life. When we went on trips, we never stayed in nice, fancy hotels but in relatives’ houses.

“I once asked my father why he didn’t charge more. He explained that he couldn’t because if he did, many of the people they served would not have access to healthcare,” shares Mastura.

Her mother went even further, often sharing their houshold supplies with needy patients.

“We’d go marketing and grocery shopping but a day later, half of what we bought would go missing. My instant noodles and chocolates would disappear because my mother had given them away,” says Mastura who has been inspired and and influenced by her parents’ generosity and altruism.

“I guess I inherited some of it. This thing about not being calculative and wanting to help – I guess it’s partly them,” she says.

In its short span, The Nasi Lemak Project has won five awards, including the International Muhammad Ali Humanitarian Award in 2014 and the Berbudi Berganda grant from the Agensi Innovation Malaysia. The enterprise was also part of the MaGIC (Malaysia Accelerator Global Innovation Centre) accelerator programme.

Also read: These ladies have a plan to help refugee families, through food

“Our aim is to start making money by 2017. By then, we will be self-sustainable and we will reinvest the money we make in our charitable programmes. Now, we need to find more outlets to carry our nasi lemak,” she says with determination.

What keeps Mastura going is seeing the positive changes in the lives of the families she works with.

“One of the ladies who we work with is moving to a better home in August. She has five children and her husband has colon cancer and can’t work. Previously, her monthly income was about RM600 and that too was inconsistent. But with The Nasi Lemak Project, her income has doubled. She can afford a better home and her husband has been getting treatment and looks better.”

This woman may know a way to solve social problems