But she’s just an honorary dame, not a real one – so, don't worry, she’s still Angie.

Britain’s Queen Elizabeth has made actress Angelina Jolie an honorary Dame at a private ceremony at Buckingham Palace on Oct 10 in recognition of her campaigning to end sexual violence in war zones and for services to UK foreign policy.

The queen presented Oscar-winning Jolie, who is special envoy to the UN High Commissioner for Refugees (UNHCR), with the Insignia of an Honorary Dame Grand Cross of the Most Distinguished Order of St Michael and St George.

Dressed in a pale suit, she shook hands with the queen during an audience in the 1844 Room, named for the year when Russian Emperor Nicholas I made a state visit. 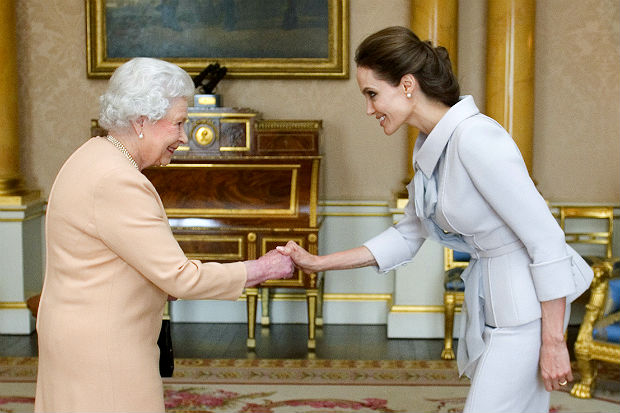 "You're a Dame now, so you better act the part, ok?" Actress Angelina Jolie is presented with the Insignia of an Honorary Dame Grand Cross of the Most Distinguished Order of St Michael and St George, by Britain's Queen Elizabeth in the 1844 room at Buckingham Palace on Oct 10. – Reuters 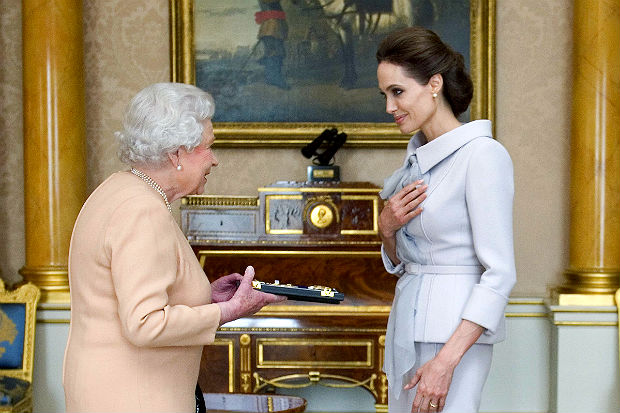 Jolie, 39, co-founded the Preventing Sexual Violence Initiative with former Foreign Secretary William Hague in 2012, and the award was announced in June when Jolie was co-chairing the End Sexual Violence in Conflict summit in London with Hague.

“To receive an honour related to foreign policy means a great deal to me, as it is what I wish to dedicate my working life to,” Jolie said at the time.

She is among 1,149 people to receive an honour for their contribution to British society in the 2014 Queen’s Birthday Honours list. Jolie is not a British citizen and therefore cannot be addressed as Dame. She receives the award on an honorary basis. – Reuters