Subject of a new book, the most famous cat in fashion reveals what life is like as Karl Lagerfeld’s “kept woman”.

Likes: Playing hide and seek in the bathtub, dining on wet food in sauce, flicking pencils from the desk onto the floor.

Such are the fancies and ennuis of Choupette, the most famous cat in fashion owned by Chanel designer Karl Lagerfeld, according to the new book Choupette – The Private Life Of A High-Flying Fashion Cat, published by Flammarion in France and Thames & Hudson in the UK.

Edited by Patrick Mauries and Jean Christophe Napias with photographs by Lagerfeld, the small 123-page hardback being released on Sept 24 is an homage to the three-year-old fluffy white Burmese with spectacular blue eyes who has a life any supermodel would envy. 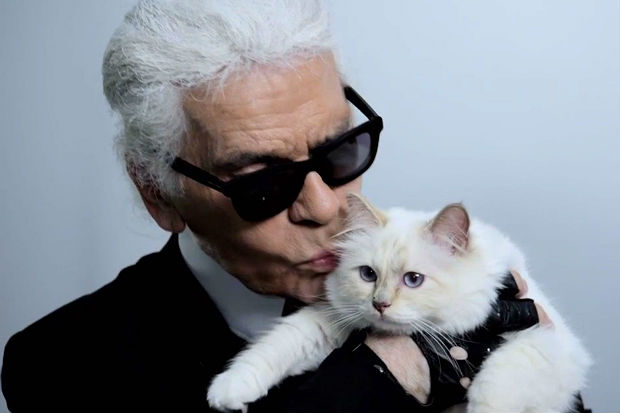 Odd couple they may be, but Karl Lagerfeld and his pet cat, Choupette, are a winning combination. Already the stylish puss has inspired a make-up line, a song, a range of fashion accessories and now a book!

From her specially made-to-measure Louis Vuitton luggage to the three silver bowls that serve as her dinnerware – she eats at the table, never on the floor – Choupette leads a charmed life. Lagerfeld himself described Choupette’s lifestyle as similar that of a “kept woman”.

Tending to her every whim are two “ladies in waiting” and a bodyguard. On flights on Lagerfeld’s private jet to Rome, Monte Carlo or New York, she is allowed to visit the cockpit. She poses with top models and celebrates her birthday with fresh shrimp cocktail.

The book shows Choupette doing things any ordinary cat would do: curling up in a box, curling up in the sink, playing with a feather toy, hiding in a shopping bag. Next to those are pictures of her playing with her very own iPad.

She also tweets, or at least has someone to do her tweeting for her. The first message under her Twitter handle @ChoupettesDiary two years ago boasted that “everything, from my whiskers to my meows, are a source of inspiration.” She now has more than 41,000 followers.

In various modelling sessions captured in the book, Choupette is seen draped around the neck of model Laetitia Casta, the Eiffel Tower in the background, or wrapped in the arms of Linda Evangelista. Choupette’s latest collabo is a make-up collection by Shu Uemura called Shupette.

It also includes recipes to please feline palates imagined by chefs from the most prestigious restaurants of Paris. The Cafe de Flore’s (Destructured) Choupette Club, named after the famous Left Bank cafe that is a favourite of Lagerfeld’s, calls for cubed chicken, egg, bread, bacon and mayonnaise.

Another mixes Alaskan King crab, smoked salmon and caviar – which Choupette’s veterinarian notes must be given in moderation as its saltiness can encourage high blood pressure in cats. Then there is her everyday menu – two types of dry food and chicken, turkey and fish wet food.

Simple tastes that no doubt endear the haute couture cat to Lagerfeld, the man who once famously pronounced: “I’m very much down to earth. Just not this earth.” – Reuters