Queen Elizabeth met Pope Francis for the first time on Thursday and gave a bemused pontiff culinary delights from the royal estates, including a dozen eggs and a bottle of whisky.

“I’ve also brought something from all our estates, which is for you personally,” said the queen, wearing a lavender dress and a purple hat, as she handed Francis a wicker basket full of food at the end of a 17-minute private meeting in the Vatican. 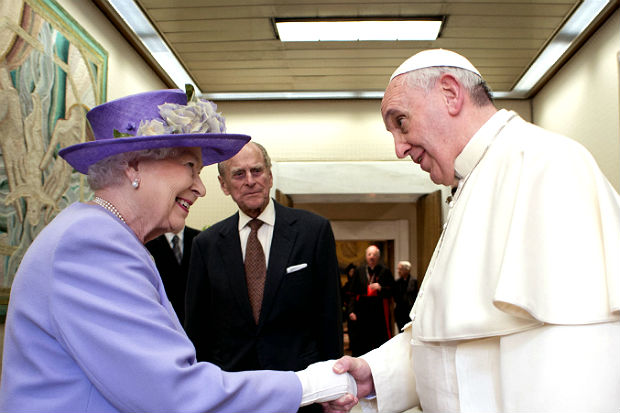 'How do you do?' Queen Elizabeth meets Pope Francis for the first time in the Vatican since his election last year. Prince Philip, the Duke of Edinburgh, can be seen in the background. – Reuters 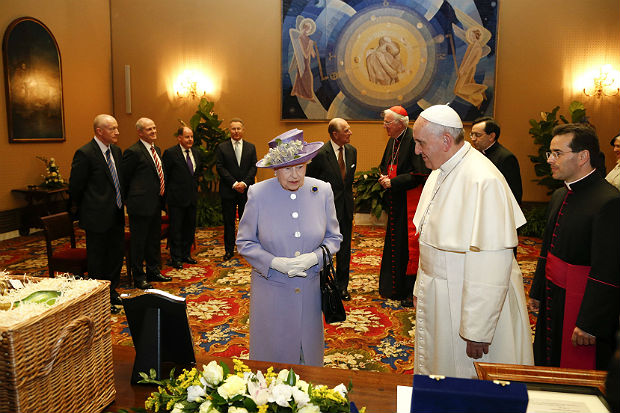 The queen and pope exchanged gifts, set out on the table seen in the foreground of the photo above. She brought him a wicker basket of food items from the royal estates, including whisky from Balmoral. He gave her a lapis lazuli orb decorated with a cross for Prince George. – Reuters

A Vatican official said the pope would likely share the food with other residents of the guesthouse where he has lived since his election – after renouncing the spacious papal apartments – or would donate it.

The Queen and Prince Philip, the Duke of Edinburgh, met the pope in a modern room attached to the Vatican’s audience hall without much of the ceremonial pomp that usually accompanies such visits.

A Vatican statement did not say what the two discussed. It would be safe, however, to assume that religion and politics were not on the list of conversation topics.

The Queen is the Supreme Governor of the Church of England, which split from Rome in 1534. The pope is Argentine and Britain went to war with Argentina over the Falkland Islands, which Argentina calls the Malvinas, in 1982. During her visit, the queen and pope sat down for a chat. Neither British nor Vatican officials have said what they chatted about. – Reuters

To cut short any speculation that the two might have discussed the Falklands, the British embassy reminded reporters that while the pope may be Argentine, the Vatican’s official position on the territorial dispute is a neutral one.

Francis also gave the queen a gift for her eight-month-old great-grandson, Prince George of Cambridge. It was a sphere made of lapis lazuli, a deep blue semi-precious stone, topped with the silver cross of St Edward.

“He will be thrilled by it,” the queen told the pope. Then she paused and added: “When he is a little older.”– Reuters