A cafe in Ipoh, Perak, gives children with learning disabilities the chance to realise their potential.

TELL him your birthdate and he will be able to tell you the day you were born,” cajoled Datin Mary Yeoh of Ray Of Hope cafe in Bercham, Ipoh, Perak. Right on cue, 17-year-old Yeoh Sheng Jae, retorts to the revealed birthdate: “Wednesday”. And he’s right! The teenager may have learning issues, but hints of his savant syndrome, like the ability to calculate days of dates, suggests that he is exceptionally smart in certain areas.

Yeoh is learning how to use his abilities at the Ray Of Hope, an eatery that has given hope to 61 children and 13 young adults (between the ages of 19 and 26) who have learning difficulties, but who are eager to lead normal lives.

The establishment, which opened its doors in early 2004 (expanding to a second adjoining lot in 2006), aspires to equip children and young adults with living skills gleaned at a restaurant, like learning to make pastry, baking and serving customers. And it is also an award-winning cafe dishing out good food.

“I followed my husband around on his rounds and realised how much help needy people require. Their situation brought tears to my eyes, but I soon realised that they need my help, not my tears,” says Ray Of Hope chairperson Yeoh.

Her husband, Datuk Yeoh Beng San, is the president of the Perak Association for the Intellectually Disabled (PAFID), and that has given her a ringside view of the plight of those living with learning disabilities in Ipoh.

Her work as a church administrator at the Cornerstone Sanctuary, put her in good stead to lead the programme at Ray Of Hope, which comes under the purview of the church diocese.

“Parents who have children with learning disabilities have approached the church to ask what they could do once their children have completed their early intervention programme. So, there was a desire to have additional programmes. And when the pastor at my church, The Rights Reverend Datuk Ng Moon Hing, proposed it, I decided to give it a try,” said Yeoh. 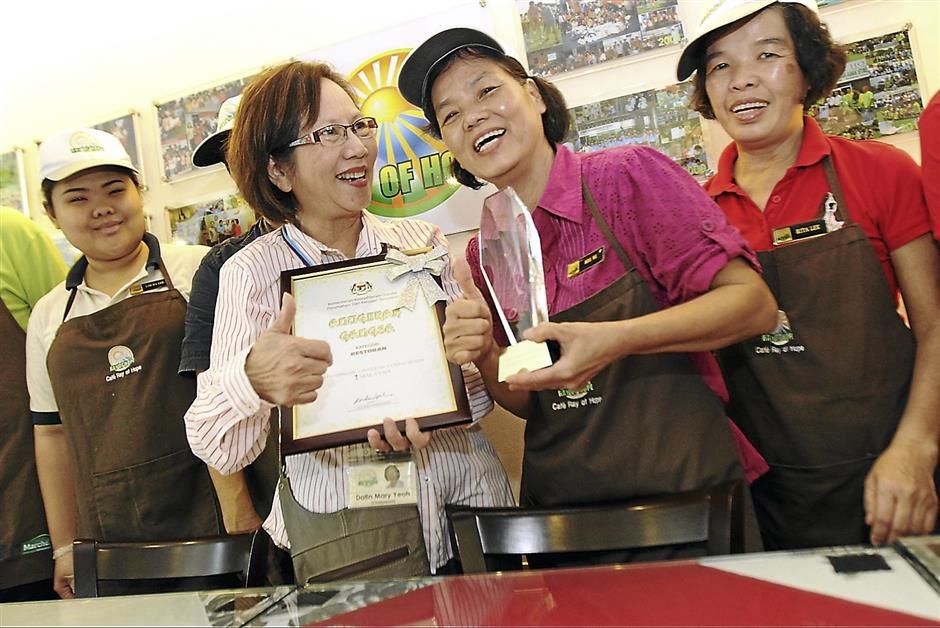 Datin Mary Yeoh (with plaque for the cleanest restaurant award) is supported by a reliable team of employees, some of whom are mothers of children learning at the cafe.

Ray Of Hope was built on a foundation of love and affection, and supported by the Perak Welfare Department and corporations such as Marche, CIMB Bank, Hong Leong Bank and Sin Soon Seng Enterprise. With the funds they received, Yeoh’s team set up the eatery.

They renovated the cafe, equipped it with cooking appliances and storage facilities, and bought a van for its catering arm. The church outsources the management of the cafe’s accounts as a check and balance measure to ensure funds are not misappropriated.

Opening a cafe as the business model seems like a curious choice for a centre that caters to individuals with learning disabilities, but Yeoh relied on the expertise of her brother, who works in the F&B industry, for guidance. “Most places have woodwork and weaving, but I wanted to give the children variety, so I chose to open a cafe instead,” said Yeoh.

Among the conditions the children have are Down Syndrome, Autism, Attention Deficit Hyperactivity Disorder (ADHD) and brain damage from a lack of oxygen. Most of the children come from Ipoh, but previously, some have come from Kampar, Gopeng, Cameron Highlands and the surrounding areas in Perak.

Walking into the cheerily-painted Ray Of Hope, one immediately gets the feeling there’s plenty of love in the place. It has a few well-furnished classrooms, rooms for recreation, computer lab, a hall for music performance and more. And the choice of colours of the interior decor conjures a sunshiny vibe.

The halal-certified cafe is a training ground to prepare teenagers and adults with learning disabilities to work in an eatery. Learning income-generating and self-reliance skills is also good for the students’ self esteem.

“It boosts their self-esteem and allows them to realise their potential, consequently giving them a sense of pride and dignity. Learning how to bake and dress cookies, and do the things we do here also allows them to express themselves.”

More importantly, Yeoh hopes other restaurants and cafes will hire the members they have trained. “We’d like to think of our place as a good training ground,” she said, adding that Ray Of Hope’s curriculum is based on Minds (Movement For The Intellectually Disabled of Singapore). The training programme for their baking and computer lessons are their own. 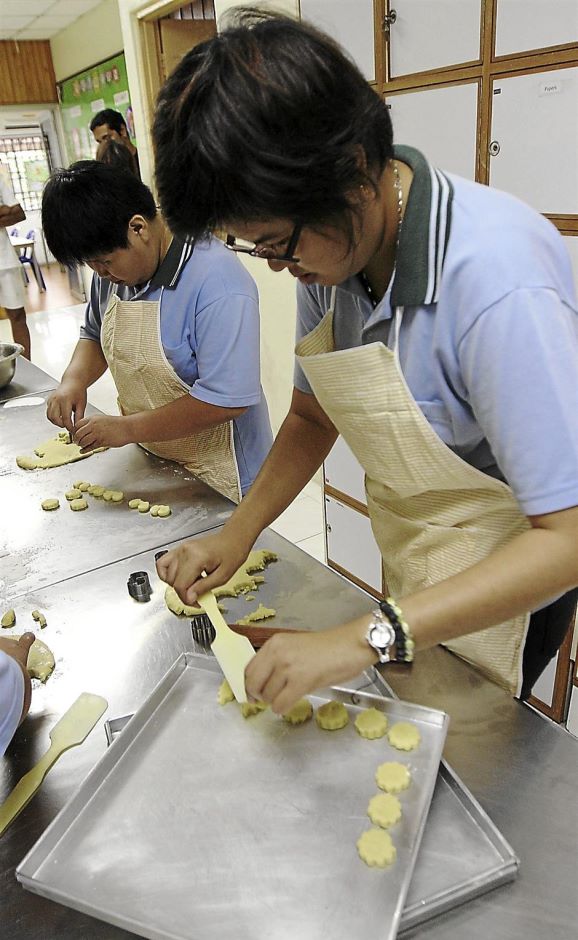 The students learn to bake at Ray of Hope, a skill which could help them gain employment in other restaurants as well.

Food offered at the halal-certified cafe includes pastries, cookies, main courses and desserts, and netizens have given the eatery a royal thumbs up. Last year, Ray Of Hope won Ipoh City Hall’s cleanest restaurant prize, which attests to the cafe’s high standards.

“The monthly operation cost for the cafe is RM40,000, so funds are usually our main concern. But we are grateful for all the assistance that’s come our way.”

For their hard work, the children earn RM100 as monthly allowance.

Ultimately, Yeoh hopes to see a township of sorts, purpose-designed for children and people with learning disabilities. “It would be nice to have a place where the entire community comes to contribute, like buying the township’s produce to sustain it,” she said.

It may be a long way yet, but it all starts with a dream, and Yeoh even hinted that she might just have a blueprint for it.