WHAT do controversy-courting comedian Russell Brand and former Green Party chairman Sir Jonathan Porritt have in common? A desire for revolution.

Except unlike Brand’s half-baked Newsnight rant which recently went viral – when he spoke about toppling “the system” but was unable to articulate what would take its place – Porritt actually has answers.

His recipe for a new world order is detailed in the book he launched in Kuala Lumpur last month, The World We Made: Alex McKay’s Story From 2050.

A renowned environmentalist and author, Porritt, 63, is well-respected within the global green movement. In fact, he may just be one of the most influential green thinkers of our generation.

One reason for that is the many books he’s written on environment-related issues. He’s never written fiction, though. This is his first attempt at the genre – but with a realistic twist.

All the things that happen in the book – the digital revolution, the shifting balance of power between people and government, consumers and business – are trajectories based on real events happening now.

Porritt has spent much of his career thinking about the problems. For nine years, he was chairman of Britain’s (now defunct) Sustainable Development Commission.

But this is a book about solutions, and writing this book gave him a chance to really dig in.

In this sense, The World We Made is a refreshing departure from the usual cautionary predictions of environmentalists. Indeed, Porritt’s done his fair share of cheerless prophesying. This time around, he thought he’d start with the idea that we have already sorted it all out, he says during a talk before the launch of the book .

“I created Alex McKay (a fictional 50-year-old history teacher) to show us how we made it to this amazing world in 2050.”

Using a fictional narrator as a plot device was incredibly liberating for Porritt – like having a blank canvas, no politics to get in the way. He was tired of people saying they couldn’t envision what a sustainable world would look like.

The final product is as visually engaging as it is interesting. Published by Phaidon Press, which specialises in the visual arts, the idea was to create a sense of the world 35 years from now. The result is a glimpse of what changing policies, mindsets and technologies could possibly achieve in 2050.

We see the Great “Green Wall” of China, planted over 300 million hectares for protection against encroaching deserts. In North Africa, gigantic solar panels fan out across the dessert, powering Europe through a trans-Mediterranean power grid. 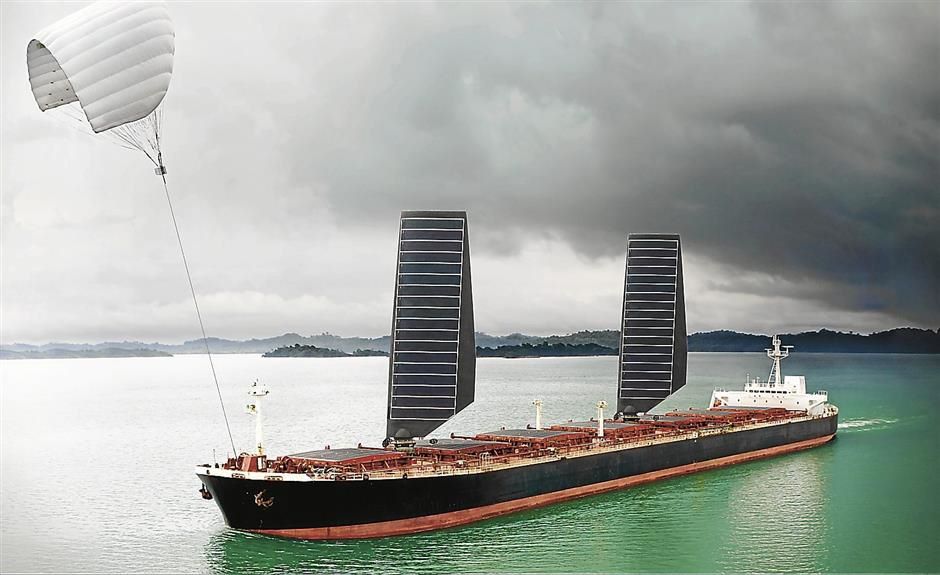 In Alex McKay’s fictional world, bulk carriers increase energy efficiency by using sky sails and solar panel sails and pumping air out of holes in the hull to create a carpet of bubbles that lessens drag, especially when combined with an anti-drag, water repelling polymer coating. Porritt says these technologies already exist, they just haven’t been used commercially.

Even the Kuala Lumpur skyline is in there, a new generation of super-sustainable, super-tall buildings dwarfing the Petronas Twin Towers. New buildings are constructed with routers, switchers and fibre-optic filaments. This “digital plumbing” creates cities that, literally, run on information.

“The trouble with sustainability is that it sounds like this really boring conceptual thingy,” says Porrit. He hopes the book will help people visualise the reality of a sustainable world, what it could actually look like, allowing us to perceive “sustainability” as something both tangible and aspirational.

But let’s be honest now. People don’t just get together, and “sort things out”. So how did it all change?

Porritt explains the impetus for this shift: In his version of the future, things get really bad before they get better. A series of major catastrophes – environmental, humanitarian and economic – are what finally commit people to making major changes in policy, regulations, investment priorities, the way they live....

His angle reflects a sombre realism about what drives change in society.

Porritt points to the recent Typhoon Haiyan. Thousands were killed in the Philippines last month. When a lot of your work is focused on policy, reality like that hits hard.

For many, climate change has ceased to be something looming in the future. It is happening. Now.

“We usually wait to be hit between the eyeballs. And then it’s sort of like, oh God, we’d better change things now,” Porritt points out.

One of The World We Made’s most radical ideas is that we move away from a consumerist society and its growth-at-all-costs economic model. It’s a hard one to digest, but the book’s protagonist, Alex McKay, is a millennium baby, born on the cusp of two very different global outlooks.

The youth of Alex’s generation witnessed capitalism prosper and then fail. They indulged in branded goods and then experienced a global recession, economic collapse and widespread natural disaster.

Aided by social media, a growing unrest culminates in the Enough! protests in 2018. The movement has a formative impact on people like Alex, who is 18 at the time. Eventually, young people become the most significant political force in the world.

Technology has a lot to do with this paradigm shift – and it’s a shift that’s happening now in the real world. Widespread Internet access and social media are opening up completely different patterns of engagement and connection. 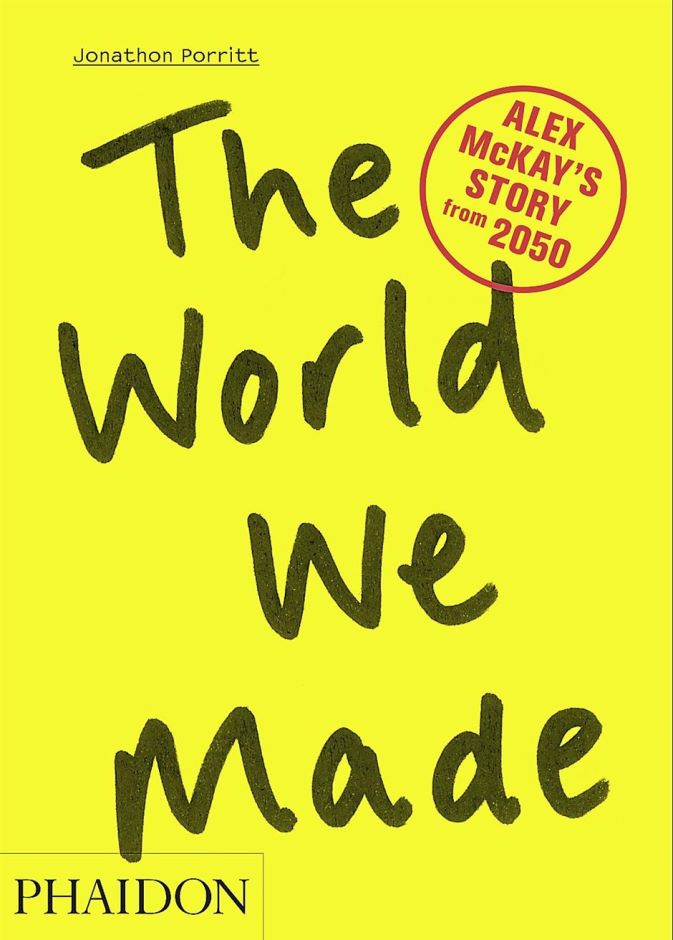 Porritt points to the demonstrations in Brazil this year. He visited the area a few weeks after they ended. A groundswell of millions spread from city to city, organised and co-ordinated largely through social media. It all sprouted from a single demonstration in Sao Paolo, about rising bus fares.

“At the time, no one predicted they would get that level of dissent, that fast,” Porritt says.

A lot of people are very critical about big business. So you may be surprised to learn that, aside from youth, corporations are the other major exponent of change in Porritt’s book. “Companies often have a better grasp of what lies out in the future than most governments do,” he points out, “because they are always trying to work out how markets are developing.”

Companies think long term, because they have to protect investments. Most governments think short term, ahead to the next election.

And the tide has begun to turn in the corporate world. Many companies have already started incorporating sustainability into corporate policy. Porritt would know, because he’s worked with some of these multinationals. Malaysia’s own Sime Darby as well as Coca Cola and Unilever have all engaged with Forum for the Future, the independent sustainability non-profit Porritt co-founded back in the 1990s.

As someone who has run the entire gamut – politician, campaigner, civil servant (as leader of Britain’s Green Party), Porritt admits that in the beginning when he first got involved in environmentalism in the 1970s, he tended to divide the world into “goodies” and “baddies”.

“We used to call it the Star Wars mentality. All the businesses were Darth Vaders, and we were all the light-sabre wielding Luke Skywalkers. It was an incredibly simple moral universe to live in,” he chuckles.

“It probably wasn’t even like that then. In a funny kind of way, it’s actually all grey.”

Today, more people are coming to appreciate that stewarding the earth involves decisions that are complex, commercially. Already, in many instances it’s companies rather than government that are driving change.

The food industry is particularly vulnerable to the effects of climate change and reduced biodiversity. The Marine Stewardship Council for example, was set up by NGOs and businesses to encourage sustainable fisheries. The same goes for the Roundtable on Sustainable Palm Oil.

The challenge now is to convince people to avoid any further investments in carbon intensive industry (think India’s new coal plants). But as a whole, Porritt thinks the transition away from a fossil fuel economy is on its way. He recently visited the world’s largest solar power plant, which is located in Abu Dhabi in the United Arab Emirates, one of the world’s richest oil nations – even oil-producing countries are getting ahead of the game by investing in alternatives.

No doubt, the shift will cause economic dislocation. People will lose jobs. But new ones will be created too. “People are finally waking up to the fact that we are still going to need just as much, if not more energy, but from different sources.

“Trillions of dollars worth of new value will be created, and lot’s of people are going to get stongkingly rich as we move towards an alternative energy economy.”

A lot of the game-changing technological advances in The World We Made are already under way. Most of the technologies he talks about already exist, either as proven concepts or at the design stage. Take 3D printing technology: Anyone read about those 3D guns that have been making headlines?

In Alex McKay’s world, this technology frees manufacturing from its reliance on the economies of scale (which requires large numbers to be commercially viable). Instead, households “manufacture” products on an as-needs basis. So getting a new tricycle for your three-year-old could be as simple as popping down to the nearest “fabrication centre”.

Even flying is more carbon-friendly in his world – the huge BoeingAir C2050 featured on page 202 of the book is the world’s first commercial hybrid electric plane, and it combines conventional turbofan jet propulsion with electric power.

Porritt says this technology is already being developed in computer simulations and could be available to market by 2035.

On the whole, Porritt is encouraged by what he sees today.

His epiphany came in the 1970s, when he read the hugely influential environmental text, A Blueprint For Survival. It’s taken longer than he would have liked, but society is finally catching up.

“If you talk about climate change today, no one in their right mind would simply accuse you of just being a bunch of greeny zealots. Today, everybody just says show me the science.”

In Alex McKay’s 2050, the world has moved away from a consumer-driven economy. We still live in a global village, but most of our food is produced in our own backyards. Big business still makes profits, but there are fewer of them, and more cooperatives. We’ve changed the way we think, the way we teach, and the way we learn.

Porritt admits he made some crazy things happen in his fictional world to achieve this: “The pope’s stance on contraception, for example, played a big role in reducing the population burden. And in the book, it’s the US Republican party (which still questions climate change today) that pushes some key climate change policies through.”

*The World We Made: Alex McKay’s Story From 2050 by Sir Jonathan Porritt is available at a 30% discount from its publisher’s website: go to phaidon.com and use the code TWM30AT. You can also get the iBook at iTunes; locally, the book is available at Kinokuniya Bookstores, Suria KLCC.