From open-plan to open-air: Setting up office in a Parisian park

The Ubiq company set up in Paris' Parc de Bagatelle for a day, enjoying a view of the La Défense business district. Photo: AFP

On July 22, a company called Ubiq set up what it considers to be the largest open-plan office in the world. The company took over the French capital's Parc de Bagatelle, not far from the La Defense business district, turning this green space into an open-air office spanning more than 200,000sq m.

It proved an unusual way to reinvent the office – a space "challenged" by the Covid-19 pandemic – while also exploring the vast possibilities of a hybrid approach to work. Indeed, for Ubiq, a hybrid model is a must for the future world of work.

The French office-space solutions search platform took the open-plan office concept to the next level with this initiative, which illustrates the "new ubiquity" the firm hopes to embody.

"We've been having fun going to work in different offices for three months now. Every week, we move our teams, and we go to work in the offices that we propose on the platform," says Mehdi Dziri, Ubiq's CEO.

"We set up the tables in less than an hour. At first, there was some excitement, and then, very quickly, we got down to work." From brainstorming sessions to video-conference meetings, the day was productive for the company, according to its CEO. However, there were a few inconveniences: the wind during Zoom meetings caused a few disturbances; and the sun, on a July afternoon, made it a little too hot for some at times.

"It's not a permanent model," says Dziri. "But it's interesting to have tried this hybrid model."

Hybridism is emerging as a trend following the issues faced by office-based workplaces in recent months. After being shaken by the pandemic, the world of work is looking to reinvent the working environment, searching for a new balance, and freeing up unnecessary space with home working.

"The office as an entity is challenged, and becomes an ecosystem. We need to mix, be more inventive and combine models," says Dziri.

In the near future, the size of offices will be reduced, and production sites will form a network, which will be mobile and hybrid. With third places, homes, restaurants, hotels, offices and more, the possible models are many and varied.

Now, it's up to each company to find their own balance as the world emerges from the pandemic. – AFP Relaxnews

4 ways to jazz up your interior space during the pandemic 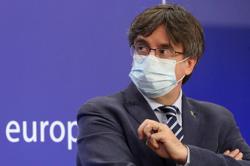