No more feeding: Stop monkeying around with our wildlife

Feeding the monkeys is a popular tourist attraction at Selangor's Batu Caves complex but it's an activity that needs to stop to avoid human-animal conflict. — ONG SOON HIN/The Star

First it was the dusky langurs, culled in Port Dickson, Negri Sembilan, following public complaints, and then a troop of nine monkeys were found poisoned on a hillside in Paya Terubong, Penang. A few weeks prior to that, a troop of 40 to 45 macaques were filmed swaggering onto the porches and roofs of homes near the Penang Botanical Gardens. It seems like lately, primates are in the news for all the wrong reasons.

The primate group of mammals includes lemurs, tarsiers, apes and also humans. Malaysia has one of the most diverse primate fauna in the world, hosting around 25 species from five families; the more well-known species include the orang utan, gibbon and long-tailed macaques.

However, like many wildlife species in the country, they are facing increasing threats to their existence. Last year, the country saw the status of four primates downgraded in the International Union for Conservation of Nature’s (IUCN) Red List of Threatened Species.

Although much of the threat to Malaysia’s primate species stems from poaching and the illegal pet trade, human-wildlife conflict is fast becoming a serious concern judging from media reports. 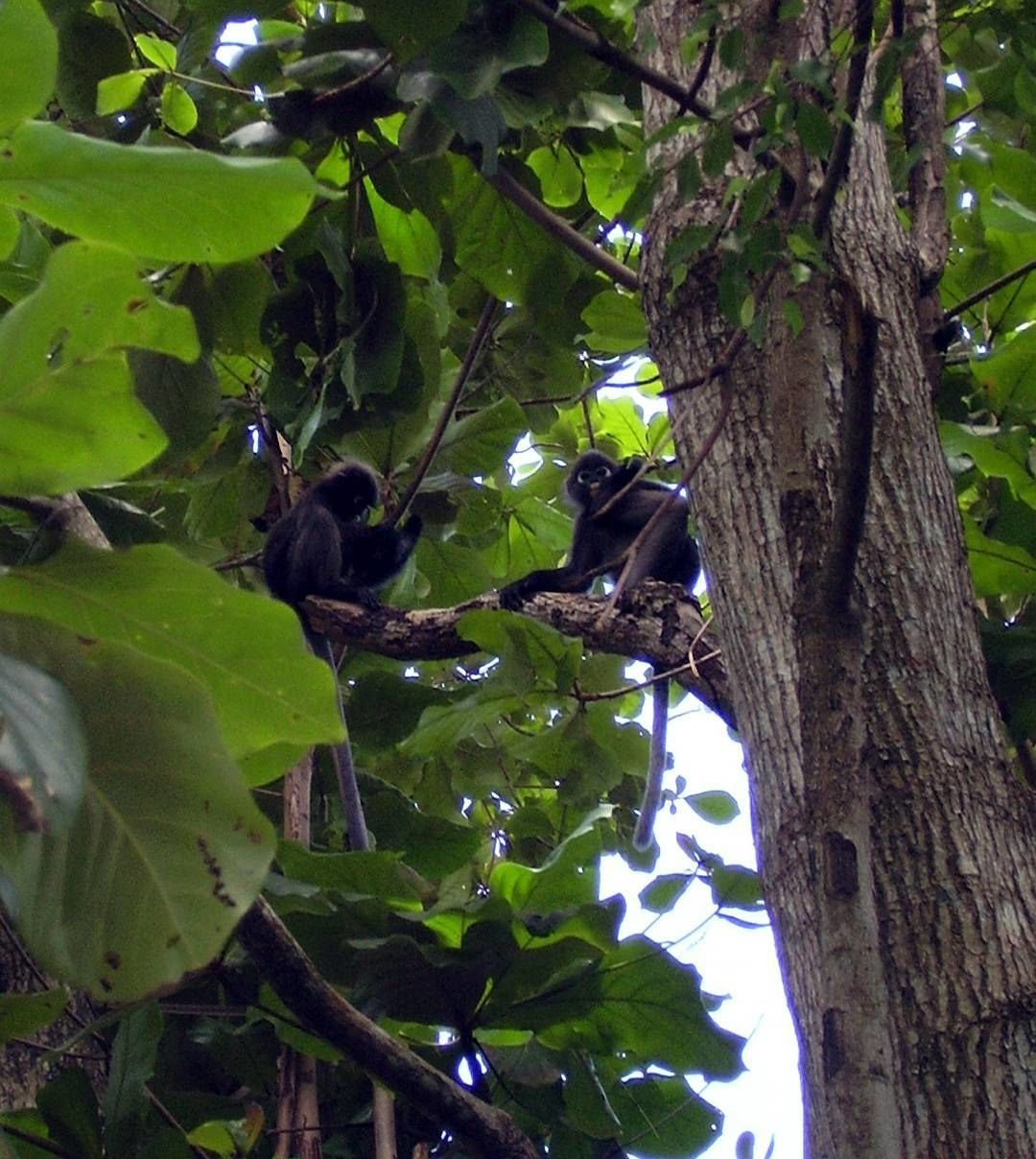 Can you spot the two dusky langurs? This is how the usually shy monkeys should live, hidden away from humans, but with development encroaching on their habitats and people feeding them or leaving food waste exposed, more and more of the animals are coming into contact and conflict with humans. — Filephoto/The StarMischief and menace

On June 12, the Wildlife and National Parks Department (Perhilitan) revealed on its Instagram page that it had received 220 public complaints about dusky langurs alone last year, involving one human fatality and two cases of injury. Between 2016 and 2020, there were 849 complaints against dusky langurs, also known as dusky leaf monkeys or lotong.

The statistics were released amid criticism earlier this year from conservation groups, including the Malaysian Primatological Society, that Perhilitan’s culling operation on May 19 in Port Dickson had been unnecessary as dusky langurs are shy animals.

In 2018, out of the 7,925 cases of human-animal conflict reported to Perhilitan, complaints against long-tailed macaques – such as those poisoned in Penang – made up the most at 4,805.

“The biggest challenge faced by Perhilitan is getting the support and cooperation of all residents to manage and reduce the conflict between humans and monkeys,” its director-general Datuk Abdul Kadir Abu Hashim was quoted as saying after another flare-up between residents and monkeys in Selangor.

The presence of these primates has become a point of contention in neighbourhoods adjacent to jungles and parks like the Penang Botanical Gardens and Taman Rimba Kiara and Taman Alam Kuala Selangor in the Klang Valley. And as more wildlife habitats continue to give way to development, such run-ins between humans and primates are bound to increase.

Even among the residents there are disagreements over how these animals should be treated. While there are those who would think nothing about feeding the monkeys, pointing out that these animals are already being starved out of their forest homes by human actions, there are others who are less tolerant and regard the primates as nothing but a public nuisance or, worse, a menace.

Before the Covid-19 pandemic restricted most movement in Selangor, there were even tours touting monkey-feeding in Taman Alam Kuala Selangor. 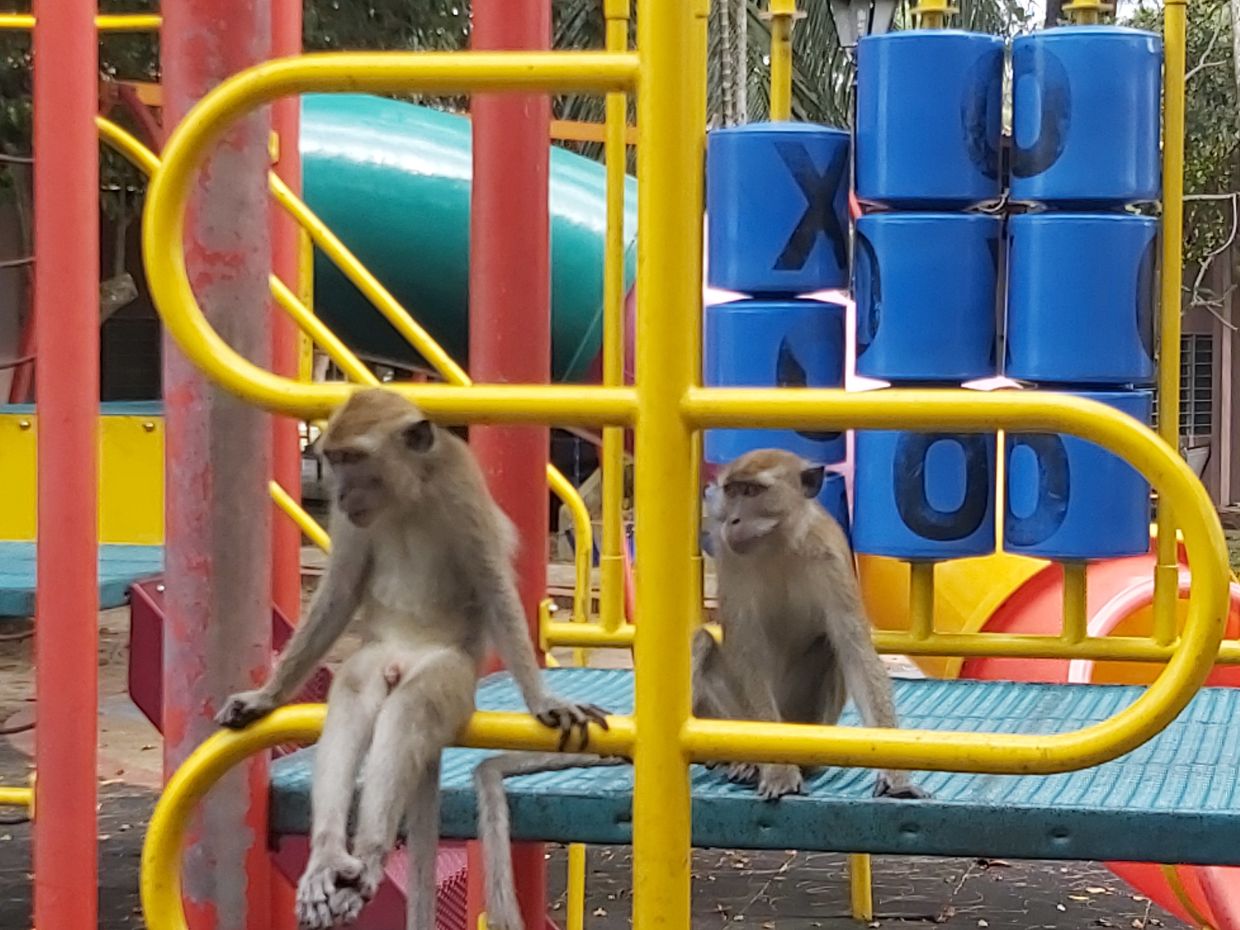 Macaques in a children's playground in Tanjung Bidara, Perak. They were probably attracted to the area by food either provided by residents or left out as waste. — Filephoto/The Star

However, conservationists and wildlife authorities are contending that providing these wild monkeys with food is actually feeding into more instances of human-wildlife conflict. In some cases, such as the poisoning in Penang on June 27, this can end tragically for the monkeys.

The Langur Project Penang, a citizen science-based primate research and conservation project, receives news of negative human- monkey interactions daily. This can range from monkeys foraging through rambutan trees and flipping rubbish bins to people being attacked while trying to feed them. Along with the complaints come some demands that the animals be relocated.

“People are trying to be kind by feeding wild monkeys, which actually causes more human-monkey conflicts.

“(They) think trapping and translocating monkeys are easy tasks but the standard operating procedures of our wildlife Acts are obsolete,” said a post on the group’s Facebook page on June 12.

Group head Jo Leen Yap says humane alternatives such as translocation or rehabilitation should always be prioritised over culling, which ought to be a last resort after a detailed investigation and which should be restricted to problematic individuals, which are usually adult males.

“Overall, it is about acknowledging the problem and tackling its causes, not its symptoms. Facilitating safe spaces for humans and wildlife in urban areas starts with us humans,” she says.

Her group is one of eight projects under the Malaysian Primatological Society, which recently held a discussion with Perhilitan after the dusky langur culling.

Among the suggestions raised during the discussion were the need for Perhilitan’s SOP on human-primate conflict management to be re-examined, a special capture method for the langurs to be developed, and for the Macaque Conflict Management Plan to be updated and include other primates. Also pointed out during the meeting was the need to address waste management in conflict areas.

Yap says the society is working alongside multiple stakeholders, including wildlife authorities and the community, to raise awareness about not feeding wild animals.

“We continue to promote the necessity for a no feeding wildlife policy to be implemented in the country,” she says, adding that Malaysians need to work to find better solutions to coexist with our rich and rare – and usually threatened or endangered – wildlife heritage.

“We believe that stricter law enforcement and hefty fines for feeding wildlife and for open littering are an essential part of the solution,” she says.

Besides imposing penalties for feeding the animals can anything else be done to prevent more confrontation or even all-out war between residents and primates?

Animal Neighbours Project lead and founder veterinarian Dr Sharmini Julita Paramasivam says while it is important to call the authorities to update them about a situation or ask for help, ultimately, the community must take responsibility for the problem.

“It is not good practice to ask the authorities to just come in and solve the problem.

“If a community chooses not to do anything but then ask authorities to ‘make the problem go away’, they are responsible for the loss of lives and the reduction of the species population. This does not help the conservation of the species in the future,” she points out.

Before things get out of hand in a neighbourhood, Dr Sharmini says it is important for residents to first determine the cause of the problem so that an action plan can be drawn up.

“Residents need to work with (conservation) groups to determine the cause of the problem.

“For example, if the monkeys are coming to the area because someone is feeding them, then the feeding needs to be stopped first and foremost,” she says, adding that the initiative has to be community-driven for a long-term solution to be found.

Dr Sharmini cautions, however, that while there are many actions that can be taken to prevent conflict, most will require commitment and participation from the community.

“Unfortunately, many communities want quick action and don’t want to take responsibility to learn how to coexist. People cannot just step back and say ‘I will let others solve this’. Everyone involved must get involved for this to work.

“There are many organisations that are willing to help with this and communities can approach us, for example, the Animal Neighbours Project, the Malaysian Primatological Society, the Langur Project Penang,” she says.

In theory, if all the correct actions are taken, there is no reason for the animals to wander into neighbourhoods.

“Residential areas that are close to a monkey habitat should have specific practices like, firstly, keeping bins shut or using monkey-proof latches so the animals cannot access food and, secondly, not have fruit trees in gardens to draw them to the houses. Thirdly, (people) should practice responsible tourism by not leaving food behind when visiting places with animals,” she says.

Yap agrees, pointing out that although making garbage bins and waste disposal sites monkey-proof requires consistent effort, these actions have proven to be very effective.

She offers another way to keep monkeys from invading homes, and that is by making the animals’ wild homes better.

“Installing urban canopy bridges to connect fragmented habitats and enriching those habitats with native primate food tree species where necessary inside existing forests near urban spaces can also help to keep primates out of residential areas,” she says.

They were there first

Asked if monkeys can be weaned off from being fed, Dr Sharmini explains: “There is no reported way to wean them off the food, especially since the monkeys have become habituated to this.

“Our advice is to stop the feeding, and then it’s a waiting game for the animals to learn that there is no food here so they have to move elsewhere.”

Unfortunately, though, most people don’t have the heart to wait this out and will start feeling pity and feeding the monkeys again, which does not help the situation.

Monkeys, points out Dr Sharmini, have enough food in the wild and do not need human food.

“But it’s up to the community to work together and ensure there is no direct and indirect feeding taking place,” she says.

Ultimately, though, residents have to remember that it is their choice to live near a green area where wildlife like monkeys is abundant.

“We have to remember that they were there first and because of the reduced habitat and our poor practices, these wildlife animals are now considered pests through no fault of their own.”