Dogs are best kept in a transport box in the car. — dpa

Some dogs love car trips but for others, it’s terribly stressful, leading to barking, whining and sickness, even.

Owners can influence this.

“You can slowly and carefully get your pet used to car travel, ” says TV dog trainer Martin Ruetter who comes from Cologne, Germany. Dogs have to be taught that car trips aren’t dangerous and there’s no reason to be afraid.

Often, the problems start early as most young dogs are picked up by their new owners and taken in a car.

That is usually a painful separation from its siblings and mother, and the car’s movement may further upset a puppy’s sensitive sense of balance at that delicate age.

The trick is to help your dog enjoy it. “The first step is to put food in the car, ” says Ruetter. You can also play games with your dog, hiding food and letting it be found. if your dog can handle all this, then try the same process but with the engine running. Sit in the car yourself and buckle up and pretend you’re about to go for a drive.

However, only start the car if your dog isn’t showing any signs of stress such as panting or salivating, Ruetter says.

Gradually, you can increase the distance and the speed – always provided your dog stays cool.

“Basically, every training session should end with a good moment, ” says Yasmin Diepenbruck, a vet from Bernkastel-Andel on the Moselle. Stop at the first indication that your dog is suffering the slightest stress or discomfort.

There are several ways to make sure your dog stays safe on trips. Padded safety harnesses, for example, give the dog a certain amount of freedom of movement in the back seat, but could be difficult if there’s a crash. If you put up a stable net or grid to keep your dog in the boot, that could mean your dog gets thrown around in an accident.

Experts say the safest way to travel is in a transport box in the boot, positioned at right angles to the direction of travel behind the rear seat backrest, according to Europe’s largest car club, the ADAC in Germany.

Keep the safety belts from the rear seat fastened even if nobody’s sitting there to make the backrest more stable in the event of a crash.

Small boxes can be placed in the foot well behind the front seats.

However, this too needs practice. Just like driving, the dog needs a chance to get used to the box, and that process requires patience and motivation. “You could try initially keeping the box in the house so it becomes a safe place, ” says Ruetter.

Treats help, too. Try placing your dog’s favourite snack or toy at the front of the box when you start the training process.

Nudge it back, successively, so the dog gets used to the box in stages. But keep it open, for now.

Your next step could be a bone to gnaw on, that the dog chews in the box – and only in the box.

Don’t let your dog leave the box with the bone – remove it if the dog heads out.

Now, if the dog is willing to enter the box without any hesitation. try closing the door, just for a few seconds.

And make sure that once you put the box in the car, it’s fastened safely so it doesn’t slip when your dog bounces in and out of it. – dpa/Jeannette Hix 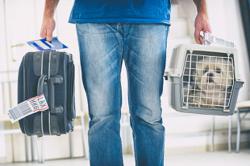