How do clowns survive the pandemic?

But that was before the novel coronavirus hit, changing not only his profession but his humour as well. On the first Monday in June, as he filled a large green suitcase with the props he would need to try to entertain 10 fidgety preschoolers at a Glendale, California, daycare centre for nearly an hour, Adams was worried his act would no longer work.

Would the kids understand the jokes he must now shout through a face mask? Could they follow the silly magic tricks and sleight of hand from a socially safe distance? Would they even want the balloon animals once they had been scrubbed with a disinfectant?

Such are the fears of a clown in the time of Covid-19. 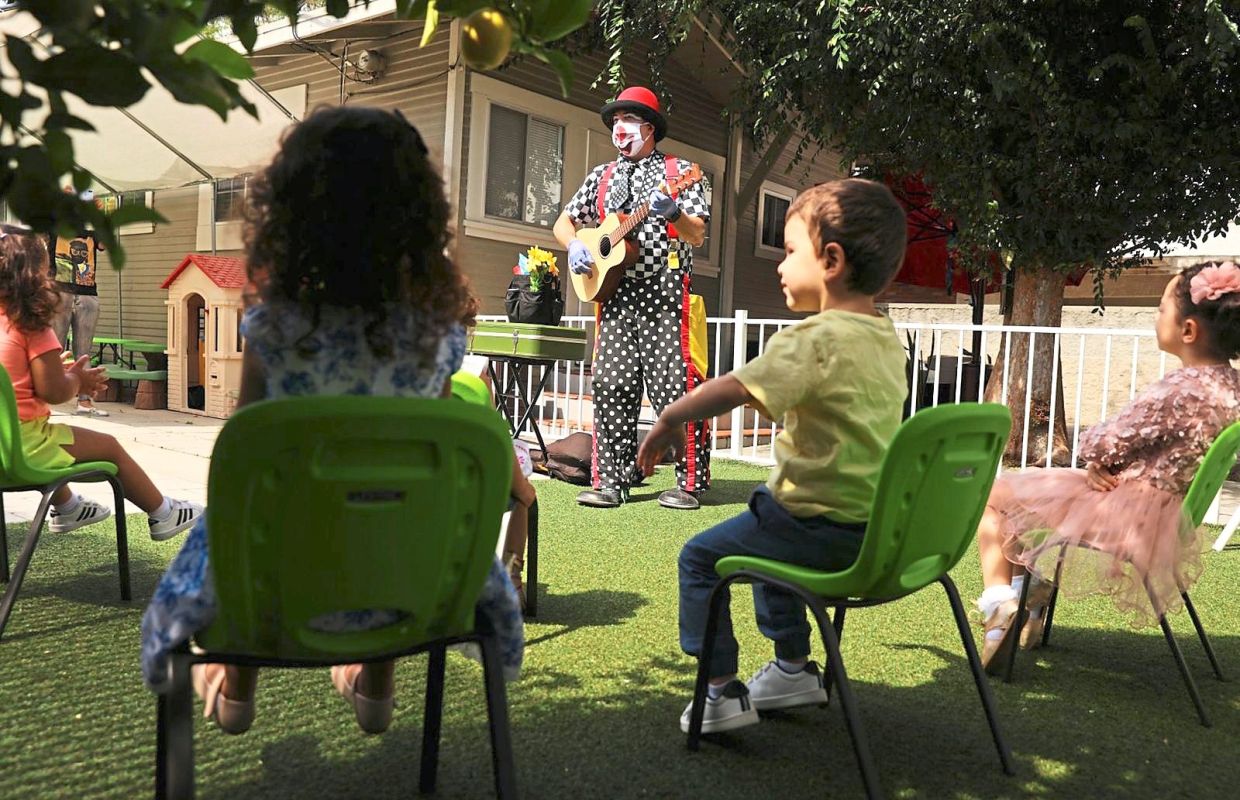 Guilford Adams performing a show at a preschool in Glendale, California, earlier this month. This day-care gig got off to a rocky start as he was unable to rely on the physical stunts that clowns normally rely on. The clowning profession has been changed by the Covid-19 pandemic, he says. — TNS

“It feels a little bit disjointed, ” Adams said while pulling on a pair of blue plastic gloves and covering a worried frown with a broad toothy smile and bulbous red nose painted on a white cloth mask. “You can’t do everything you want to do.”

As he feared, the daycare gig got off to a rocky start. Wearing oversized black-and-white polka-dot pants, a checkerboard shirt and red suspenders under a red hat, Adams struggled to connect with the kids who were sitting on the other side of the lawn.

The first couple of jokes fell flat and, when a magic trick proved less than magical, the audience began to squirm in their chairs. Unable to use the physical stunts and interactions that clowns rely on to connect with kids, Adams began to sweat under the punishing late-morning sun.

Like most gig workers, Adams has been financially devastated by the pandemic and the dramatic changes it brought to daily life. Before the outbreak, he could do a half-dozen shows over a long weekend and earn as much as US$1,000 (RM4,280). The performance in the backyard of a Glendale daycare centre would be only his third since stay-at-home orders were put in place three months ago.

He hasn’t had another since that day.

“I have a mortgage. I need to start paying bills, ” said Adams, who, like most clowns, lives in our imagination but gets his mail at the small house in Highland Park he shares with his wife and three-year-old twin boys. “I need to figure out what it’s like to work in a sort of a Covid world now. We’re all trying to navigate it.”

But if the coronavirus has drained the bank accounts and bloodied the fake noses of party clowns like Adams, it has opened new possibilities for other performers. As Covid-19 has forced most hospitals to close to all but essential personnel, medical clowns – think Robin Williams in Patch Adams – have moved their acts to Zoom, FaceTime and other video platforms.

“This will forever change our view of what is possible, ” said Zachary Steel, an assistant professor of theatre practice at University of Southern California who teaches medical clowning. “We don’t look at this like ‘Oh, let’s just wait for the pandemic to pass and then we’ll go about our business the way that we’re used to.’... We need to make lemonade out of lemons.”

Just a few months ago, Steel’s medical clowns – volunteers, former students and others – were limited to certain floors, certain rooms, even certain hospitals by disease, symptoms and geography. Then Covid cut off even that limited access.

Taking their performances to the Internet, however, has removed all those barriers.

“We were very concerned at the beginning that this wouldn’t be possible because it’s a very in-the-moment, in-person, immediate, interactive art form, ” said Steel, 39, who is also co-artistic director of the Clown School in Los Angeles, where students pay for classes. “But we have found incredible possibility and opportunity through virtual clowning. It’s been amazing.”

Doctors of the soul

Hospital clowning, also known as clown care, has been around for more than 30 years and is especially popular in Israel, Australia and throughout Latin America, where clowns don’t have the stigma, nor promote the fright, they often do in the United States. 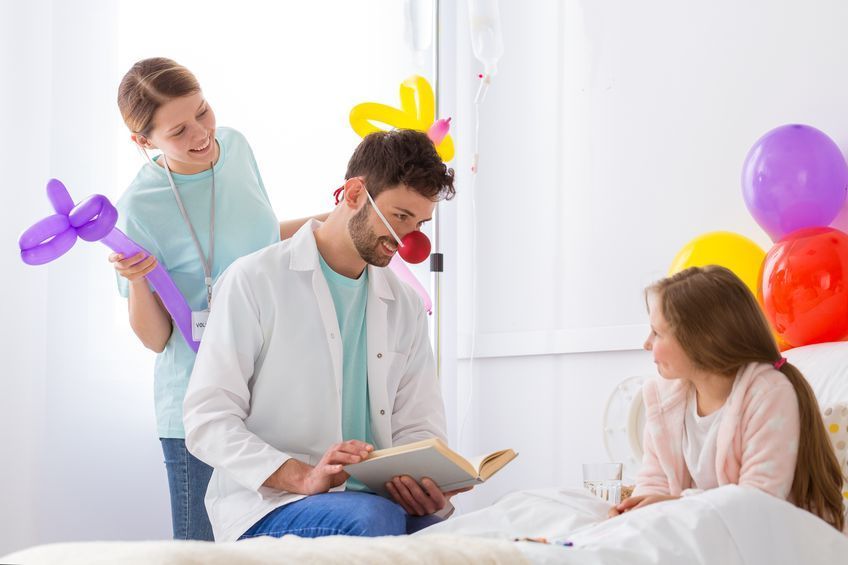 At its best, clown care both relaxes and distracts patients by introducing whimsy and diversion into what is normally a serious and regimented environment. — 123rf.com

“At the beginning, both the community and the doctors didn’t know about the benefits, ” said Raquel Gendry, 51, whose clown care programme in Ecuador has trained 200 volunteer clowns who have worked with 300,000 patients over 14 years. For the last six months, she has been working with Steel at USC.

“We do not heal, but we are like doctors of the soul, ” she said in Spanish. “Play and love are universal. We get smiles, we play games and people forget for a moment that they are in the hospital.”

At its best, clown care both relaxes and distracts patients by introducing whimsy and diversion into what is normally a serious and regimented environment. Numerous clinical studies have vouched for its efficacy, especially among children, at reducing the fear and uncertainty of being treated for a life-threatening condition.

Virtual presence anywhere in the world

While the power of direct contact and physical spontaneity is lost in the move to Zoom and other videoconferencing services, Covid-19 had already taken much of that away anyway.

It also allowed performers to see that there are certain advantages in performing remotely.

Virtual clowns still dress in full costume, wear a red nose and hat and use the same time-worn props, but online they can change their background, manipulate the camera angle and bounce between screens. More important, they have access virtually to hospitals that they cannot enter physically.

Before the pandemic, Steel’s clowns were visiting three hospitals in Southern California. Now they can perform for patients anywhere in the world, including those in elder-care facilities, which have been hard-hit by Covid-19. In addition, because Steel’s clowns are all students and volunteers, the financial consequences of Covid-19 haven’t affected them as much as a party clown such as Adams.

“We sort of adapted and created this virtual medical clowning programme, and I actually think this is a huge plus, ” said Rebecca Mellinger, who took Steel’s class in her final semester at USC in 2017 and now, as coordinator for the medical clown programme, is guiding its transition to digital platforms. “We realised that we don’t have to be in the room to support these patients.”

Back in Glendale, Adams is searching for a way to restart his career, rummaging through his blue PT Cruiser – the license plates read “LA CLWN”, short for Los Angeles Clown Co, his one-man troupe – and discarding props that no longer fit into his Covid-safe show.

Losing work is just one of the challenges that party clowns are having to deal with; learning how to perform in the new normal, with masks and social distancing, is another.

But clowns are adept at that kind of improvisation because being one, even in the best of times, isn’t all fun and games. Hollywood can be particularly cruel. With movies such as Joker and It portraying clowns as sadistic sociopaths, it can be tough to get a smile even when you have one painted on your face.

“If you’re a clown, you’re used to falling down and picking yourself up, ” Adams said. “And you must get some enjoyment out of it because you wouldn’t keep doing it.

Adams, 46, has been clowning so long, the skateboard-sized shoes his mum bought him almost 20 years ago have been resoled six times. Yet in all that time he’s never experienced anything like the coronavirus outbreak, which has not only stopped him from working but is altering the way he will have to work going forward.

“I’ve had to adapt my show, ” said Adams, who estimates he has done nearly 4,000 performances since his first clown show when he was in the seventh grade. But none, before now, were done wearing personal protective equipment, standing at least 6ft (1.8m) from his audience and sterilising everything he touches, including those balloon animals.

“To be completely honest, I don’t know how to fix my messaging. I’ve been doing this for 20 years and I don’t know what I’m walking into.”

But the alternative – doing the show the old way – is unacceptable as long as the virus lingers. So Adams insists on wearing a mask and gloves and encourages the adults around him to do the same thing. If nothing else, it sets a good example for the children who may be living with the disease for some time.

“I don’t see it improving. I see us trying to have to mould into what is a new thing, ” he said. “But the reality is if I was asymptomatic and I contributed to hurting somebody, I’d be devastated.”

He admits he may have jumped the gun a bit on coming back before LA County had completely opened up. But then which health official do you call to find out when it’s safe to be a clown again?

“There’s something very arm’s-length about it, which is contrary to what clowns do, ” he said. “Clowns kind of get into your space a little bit. You break social customs. And now you have this artificial social custom of six feet away.”

At the Glendale day-care centre, it was painfully clear his initial attempts to make a connection with the kids weren’t working. But when he stumbled through a purposely inept attempt at juggling, one girl began to laugh. Soon others joined in and Adams quickly found his stride.

By the time the 45-minute show ended, a teacher had to intervene to keep the kids in their seats.

He left to the cheers of a clown.

“Covid is not going away. I don’t see it changing, so I’m going to have to change, ” said Adams, who seemed both weary and relieved as he followed his massive clown shoes back to the PT Cruiser.

“Kids who are five or six, this is a real shakeup for them. They know something’s wrong, ” he added. “People seem panicked. And I think there’s kind of a need for clowns even more to create some normalcy for these kids.” – Tribune News Services/Los Angeles Times/Kevin Baxter

4 amazing rescue dogs and their inspiring stories
Dear Thelma: I'm called names and bullied for being overweight
Dog Talk: Some dogs dislike men, others dislike women – how can they tell who's who?
1970s KL bungalow turned into relaxing modern home with industrial vibe
Preparing your child with autism to enter adulthood
How Malaysia's best cocktail bars survived the pandemic
Learning to hug again: Time to move past elbow bumps for our own mental health
Scientists grow plants in lunar dirt. Next stop, the moon!
How to make the most of hand-me-down decor
Huge haul of Scotch whisky stolen by masked gang in mere minutes