When birds come a-calling at your garden

I must admit to feeling a little jealous whenever my buddy Dr Samuel (Sam) Ong, a cardiologist, avid birder and photographer, sent me beautiful pictures of birds that he had taken in the wild both in Malaysia and overseas. I was in awe of his breadth of knowledge and his photography skills.

With Sam’s guidance, however, my ignorance has reduced a tiny bit over the last few months. I have discovered that I did not have to travel far and that, by keeping my eyes open, I would see a variety of unusual birds visit my home garden.

We live in an old part of Petaling Jaya – at the foot of Gasing Hills – and the sounds of various types of birds permeate the morning air every day. I took many photographs and Sam helped me identify the birds. For experts like Sam, these “common garden birds” were not a challenge, but showing the pictures to many “non-experts” I realise that many non-birders like me had not seen birds like these before – thus this article is for the amateurs.

The first time I saw an unusual bird in my garden was about 15 years ago; it had beautiful blue plumage and a long orange beak – I discovered later that it was a Kingfisher. A few months ago, a similar bird came and sat on the heliconia bushes near the small pond in our garden. My wife captured a picture with her phone – we identified this as the common White Throated Kingfisher. Subsequently, I have managed to take better pictures of this bird perched on the tree behind our house and on the old TV aerial on our roof. My reading tells me that there are about 120 species of Kingfishers worldwide.

One of the earliest pictures of “unusual” birds that I took was one with bright yellow feathers, black eyelines, pink beak and another with light brown feathers and white throat. Both birds were sipping honey from the bottlebrush flowers behind my kitchen. I was very disappointed when Sam said they were not unusual and that they were common garden birds – the Black-naped Oriole and the Yellow-vented Bulbul. However, once “educated”, I realised Sam was right – the Yellow Vented Bulbuls were frequent visitors to my garden and I saw them build nests, lay eggs and feed their babies among my plants. The day the baby birds are big enough, there would be a ruckus as the parents and babies would fly off together – I always thought that this was some sort of “coming of age celebration”. The Black-naped Orioles were less frequently seen, intermittently flying individually or in groups of two or three into my garden and in the trees behind my house – I also learnt to recognise their rich fluty cries.

One evening, during the MCO, after a rainstorm two beautiful birds flew into the garden and sat sipping honey and water from the flowers of the Costus speciosus plants. We identified these as the male and female Brown Throated Sunbirds; the male was more colourful. I have not seen the male bird subsequently but the female comes often, especially after the rain, to drink from the Costus speciosus flowers. I have learnt to recognise her arrival by her high-pitched “chip chip” sound.

Late last year, my wife and I witnessed an Olive-backed Sunbird, flapping its wings wildly as it hovered mid-air, sipping honey from the Combretum Constrictum flowers behind our kitchen.

Some months back, one evening I saw the usual pigeons sitting in a row on the power lines in front of my house – two of them appeared unusual. Using my camera I noted that one of them had a pink and the other a dull green neck and breast – not the usual pigeons I see. We identified them as Pink-necked Green Pigeons – the male is pink necked. They are members of the Columbidae family, of which there are 300 worldwide and that 26 of these are found in gardens and forests in Malaysia. Interestingly, unlike other birds, their babies are fed pigeon milk – a fluid that is produced in glands of both parents.

Late last year, a bird flew and sat on the mango tree at the end of my garden. I first thought it was a large crow but then it emitted an unusual “tuk tuk tuk” sound. My camera picked out a bird with a stout beak, red head, green back and white underparts with green streaks – we identified this as a Coppersmith Barbet.

I noted a mobile bulge in its throat as it made its “tuk tuk” sound. I learnt that this bird got its name from its voice which resembled the knocking sounds made by a coppersmith. Daily, early in the morning a loud “kwok kwok” sound would resonate through my neighbourhood. It took me awhile to successfully capture a picture of the bluish black bird with crimson eyes hidden among the trees creating this sound. My neighbours called it Burung Tuwu; it is the Asian Koel. It belongs to the cuckoo family and, in the villages, its cry is the “alarm clock” that awakens people in the mornings. Our Indonesian maid, however, was terrified during the first few weeks of working for us – in her village, the cry of this bird was a bad omen – it predicted the imminent death of a village elder.

The Koel is a brood parasite – it lays its eggs in the nests of other birds – the male Koel distracting the nest owner, while the female lays the egg. The host then unknowingly does the work of hatching the Koel egg. It is said that this bird is mentioned in the ancient Hindu Scriptures, the Vedas, where it is given the name Anya Vapa, translated as “that which is raised by others”.

In February, I saw a beautiful bird in my garden. It had a long sharp beak, blue tail, green and blue wings and a yellow and brown throat. As I watched, it made several swoops from the tree on which it was sitting, caught a bee that was flying nearby and ate it. We identified it as a Blue-tailed Bee-eater. It appeared two days in a row, but I have not seen it since.

In March, I heard a melodious bird sound in my back garden – I managed to capture a clear picture of a blue-coloured bird which we identified as a Magpie Robin. These birds are hunted by poachers everywhere as they can fetch a high price willingly paid by song bird lovers.

Besides the birds mentioned above, with Sam’s help I have identified Peaceful Doves, Spotted Doves, Common Iora, Dark-throated Oriole and Asian Glossy Starlings (adults and juveniles) in my garden and neighbourhood. These birds have obviously been coming for years but only in recent months have I got to know the avian visitors to my garden. I have my buddy Sam to thank for opening my eyes and ears to another of God’s beautiful creations. 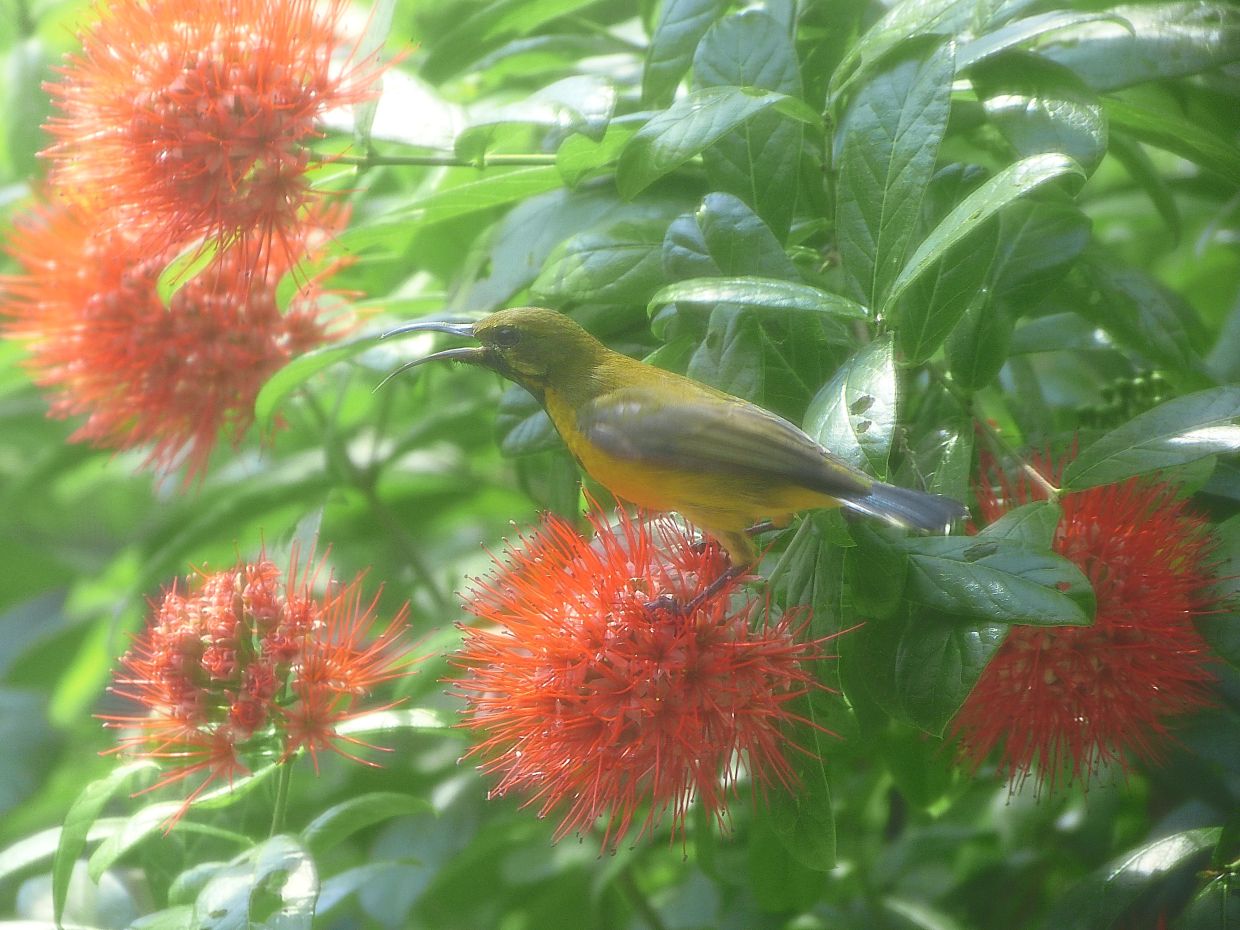 A pair of Pink-necked Green Pigeons (male has a pink neck).

How to attract birds to your home