Foong at the Federal Academy of Ballet two years ago. Photos: Yvonne Foong

If a young woman has shown a tenacious fighting spirit despite battling a debilitating rare disease since she was a teenager, it is Yvonne Foong.

Things took a turn for the worse about a year ago when she suffered a fall, which left her bedridden.

Foong now urgently needs funds, which she hopes to raise from selling her book, A Life Worth Living (priced at RM35 each).

The 33-year-old suffers from Neurofibromatosis Type 2 (NF II), a rare genetic disorder that causes tumours to grow in the brain, spine and along peripheral nerves.

Diagnosed with the disorder at age 16, she has undergone multiple surgeries since then to remove various tumours.

The funds raised will be used for physiotherapy, daily needs such as diapers and milk powder, and a nurse to help look after her on a long-term basis. She also needs an emergency fund for medical treatment.

With her idol singer-songwriter Wang Leehom in 2014.

From the time she was diagnosed, Foong has made continuous efforts to raise funds and awareness about the disease, from designing and selling T-shirts, attending speaking engagements, to writing two books about living with the disorder – I’m Not Sick, Just A Bit Unwell and her second book, A Life Worth Living.

Foong's determination to overcome her disease and live a normal life won her the 2005 Most Outstanding Youth of the Year award, presented by the Asian Youth Ambassadors.

In a 2014 report in The Star, she said, “A lot of people who have NF can go undiagnosed for many years, especially if the expression and manifestation of their genetic disorder is not easily recognisable.

“Doctors may have studied the more common genetic disorders theoretically in medical school. But to recognise the condition in real life requires clinical experience,” said Foong, who also pushed for a database to facilitate the sharing of knowledge and information among doctors.

Also deaf in one ear and visually-impaired, Foong is now unable to sit up on her own nor turn to her sides since she was bedridden.

Her muscles have not atrophied but physiotherapy sessions are needed to help improve her condition and to prevent further deterioration.

Her sole caretaker is her 70-year-old mother, who has health problems of her own. For more details, go to facebook.com/yvonnefmn. 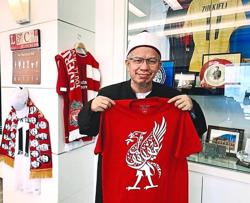 Zulkifli’s Liverpool T-shirt a khat above the rest