‘Rescuing’ food to feed the needy

A food bank is becoming a familiar concept in Malaysia nowadays but setting one up in the early days wasn’t so easy, as Food Aid Foundation operations director Hayati Ismail found out.

For one thing, the foundation wasn’t allowed to use the word “food bank” in its registration when it was set up in 2013 – because “the word ‘bank’ can only be used by financial institutions”.

“The restriction also stated that we could not use the words ‘food bank’ as our social media name,” she says in an interview.

Although the world’s first food bank was established in the United States in 1967, the idea didn’t quite catch on elsewhere, not even in Europe where an extensive welfare system meant that not many needy people had to go hungry.

However, after the 2008 financial crisis hit Europe hard and worsened economic conditions for low income families, the concept took off in many countries.

While some food banks give directly to recipients, others may choose to supply provisions to soup kitchens and charities serving meals for the needy.

It's challenging to get new donors without intervention from a government agency, says Hayati Ismail. Photo: Filepic

For many food banks, most of their donated provisions come from what’s left over from the supply chain such as overproduction, too many orders, near to expiry dates or even food from hotels and restaurants. This means they help to reduce food waste.

Food Aid works like that; according to its website, it “rescues” surplus food from the supply chain and distributes it to people in need.

In Malaysia, it’s an idea that began gaining ground only a few years ago, with the Government lately getting into the act.

Hayati remembers that when they initially presented the idea of a food bank to a few ministries, many hadn’t heard of the concept of rescuing edible food to stop it from ending up in a landfill.

“The misconception is that a food bank is limited to collecting groceries but not rescuing surplus food,” she says, adding that the foundation had early on set a clear direction in how it wanted to operate.

“With just saving low-risk surplus food items we will not reach our mission of reducing the amount of food going to landfills.

“Food Aid Foundation has taken a bolder step by rescuing non-perishable and perishable food, including raw ingredients and cooked food from cafes and hotels,” says the former interior designer.

“We set up a commercial kitchen to ensure that we are able to rescue food using technology that can prolong its shelf life,” she says, adding that it’s a waste to throw away close-to-its-expiry-date food just because no one wants it although it is still safe for consumption.

“We invested in food re-engineering or food repurposing techniques, making us the only food bank in Malaysia with the ability to rescue and save a large amount of food at one time,” she explains.

A similar initiative under the Government, Food Bank Malaysia, was set up late last year and has, as of February this year, reportedly benefited 45,850 households and saved some 1,055 tonnes of food from being dumped.

In fact, on May 13, Domestic Trade and Consumer Affairs Minister Datuk Seri Saifuddin Nasution Ismail announced that the ministry is drawing up a Bill to regulate food bank initiatives and to ensure a more systematic implementation of such programmes.

To date, the ministry has managed to secure the commitment of 430 supermarkets nationwide to donate their food surpluses to Food Bank Malaysia, which will then channel the produce and food to, among others, Food Aid Foundation.

Still, carrying out the daily tasks of sourcing the extra food and making sure that it reaches needy families and welfare homes in time via a network of volunteers making their way through traffic-clogged city streets is not without its challenges.

In addition to this, any food bank will want to ensure that only truly needy families benefit from the programme and that it is not abused.

One of Hayati’s main challenges now is convincing the donors to hand over untouched food that is safe for human consumption because the donors could be held responsible if anyone got sick from the food.

“The lack of support from the Government before the 14th General Election and the absence of a law to protect donors make it challenging to get surplus food from food manufacturers, wholesalers, food operators, distributors, hypermarket and hotels,” she explains.

And while Food Bank Malaysia has eased Food Aid Foundation’s hardship a little, it is still challenging to get new donors without intervention from a Government agency.

Despite rescuing surplus food since 2013, “We are still not spared donors’ negative perception of food for charity, which is linked to abuse and food safety issues,” points out Hayati, expressing her gratitude to those who have given Food Aid their trust.

Although getting volunteers – the army behind the mammoth operation of moving the food – is now easy, especially on weekends, it remains a struggle to find enough people during office hours, she laments.

“We are glad that some private universities have made community engagement compulsory in their syllabus,” says Hayati, hoping that this will at least “help to fill the need for volunteers”.

With the foundation operating seven days a week and covering a large area in the Klang Valley, the cost of logistics is another challenge.

Hayati says food with a shorter shelf life must be distributed on the same day it is collected, so time is of the essence.

A food bank is all about managing logistics and manpower, says Justin Cheah. Photo: Filepic

Like Hayati, Kechara Soup Kitchen Society project director Justin Cheah also faces difficulties in arranging logistics and finding consistent volunteers – “Volunteers who can move things and trucks and vans that have to go here and there to pick up.

“Not all donors are able to deliver their food,” he says.

Having a food bank is all about managing logistics and manpower, says Cheah. However, Kechara’s main challenge, he says, is having the funds to run the food bank, which relies on financial donations.

Cheah says while it is not difficult to ensure that only the truly deserving receive food from the Kechara Soup Kitchen, it is “tedious work”.

“What we normally do is to look for needy people and check their eligibility,” he says.

Asked if Kechara looks for information from the Social Welfare Department, Cheah says, “The data is not very updated”.

“We did initially but when we did our due diligence to countercheck, some had either passed on or are now in better (financial) shape. Some had changed their numbers or addresses, etc.”

Cheah says some on the their list of recipients are recommended by other NGOs.

“Initially, people didn’t know about us. Hence, no one referred needy people to us.

“We had to go to the (low cost) flats to find them,” he says, adding that they even went from unit to unit.

For Food Aid, Hayati says they set questionnaires and visit applicants to determine if the recipients have a valid need for assistance.

They also “learned not to work in silos and to work with other NGOs and Government agencies to filter through the beneficiaries of the programme,” she says.

“There are many deserving beneficiaries. Unfortunately, we don’t have a large enough volume of food rescued to feed all of them.”

‘Rescuing’ food to feed the needy 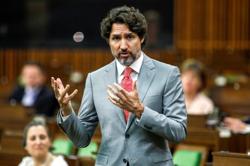 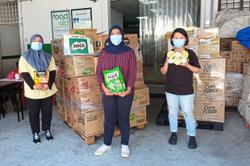 Bundles of goodness for the needy