Cow dung inspired Cyril Mathias to be a green technopreneur

Mathias at a farm in Queensland, Australia that features a micro solar project.

Watching nuns converting cow dung to cooking gas in his school, and his dad generating hydroelectricity at their rubber plantation, played a key role in shaping Cyril John Mathias into who he is today.

Growing up in the famous coffee town of Chikmagalur in India, the green technopreneur attended school there.

“The nuns had cows to cater to their dairy needs and, instead of letting the cow dung go to waste, they collected it to produce biogas,” says Cyril, 46, adding that biogas is rich in methane and is used in most parts of India and Pakistan as a renewable energy source.

“An interesting part was that the school curriculum back then had a subject called moral studies and part of it was things related to waste management and for us to love the environment. When I look back at it now, it amazes me,” adds Mathias, who grew up in both Chikmagalur and Bangalore.

“I was inspired by his love for trees and his knowledge of the forests’ flora and fauna. My dad also owned a rubber plantation, in addition to coffee. I saw how he built a system to use the water after washing the rubber sheets from processing, on our plantation, to make gas for heating and cooking purposes.

“In addition, we had a water source on our plantation and my dad tapped into a bit of hydroelectricity, generating small amounts of electricity as a green source of energy. Coffee in India, unlike in other parts of the world, is grown under the trees – this makes for a more environmentally sustainable way of planting. So all this inspired me,” shares Mathias, who sold off everything he owned in a few Indian cities and bought a house near one of the oldest wildlife parks in India which he opens to foreign nature lovers, including Malaysians, at no cost.

After completing his law degree at SDM Law College in Mangalore, run by the Jains, Mathias worked as an operations manager in multinational companies for over 17 years but never found job satisfaction.

Mathias' expertise lies in agricultural IoT where he promotes digitisation and green technology as a way to produce environmentally-friendly output for the benefit of end consumers. Photos: Cyril Mathias

“In the corporate world, you are structured to think Key Performance Index, satisfaction surveys and work in a formal system. There is no encouragement for creativity and innovation in large corporates. The desire to create an impact in a field I’m passionate about made my decision (to leave the corporate world) easier.

“I utilise all my learning, including being a lawyer, in my current field. At some stage, I would like to utilise my legal skills in environment protection laws,” shares Mathias, who also holds an MBA from the University of Canberra, Australia, on process improvement.

Currently based in Kuala Lumpur, Mathias first visited Malaysia as a tourist in 2012.

“I liked the feeling that Kuala Lumpur is one of the few cities in the world that has a large number of beautiful waterfalls and hills within an hour’s drive. Being a hiker and nature lover, I felt that, to be able to do this, I should set up something of my own to sustain myself here.”

He eventually set up Solnovation Analytics, a company involved in the Internet of Things (IoT) for the agricultural business sector.

Recently, the Malaysian Technical Standards Forum Bhd (MTSFB) – which comes under the Malaysian Communications and Multimedia Commission (MCMC) – gave his company an award for a project in industrial IoT.

“Our project was on Smart Factory IoT and involved the oldest rubber factory in Malaysia. The challenge was to automate this factory through IoT,” shares Mathias.

Currently, some of the projects that he is working on include a durian plantation where the goal is to get all data live – on soil humidity, NPK (nitrogen, phosphorus, potassium) levels, pH levels, temperature and production – so that anywhere in the world, the owners can view the performance of their plantation.

An avid climber and nature lover, Mathias has scaled some 50 mountains. Here, he is at the base camp of Mount Everest.

“This data is extremely useful to plantations and farmers to improve their yields, cut costs and be transparent and have a sustainable set-up.”

Another project is on improving water quality for the poultry industry by using his company’s monitoring tools and also building a tool using visual artificial intelligence to grade quality of agricultural products like chillies.

Mathias says his current focus is on agricultural IoT, working with large plantations as well as smaller players to embrace digitisation and green technology as a way to produce environmentally friendly output for the wellness of end consumers.

“Part of my long-term goal is to promote healthy eating and also protect nature by implementing healthy practices like reducing the use of pesticides.

“In addition, our focus is on the logistics and transportation sector. We want to build products for the safety of drivers and make trucks environmentally friendly by tracking their performances in real time and by geofencing to track movement of vehicles.

“It’s the agricultural sector and transportation that consumes the bulk of energy in the world. There is a need to focus on these to reduce carbon emissions,” he adds.

Mathias was also involved in a project that provided solar lights to an orang asli group in Rompin, Pahang, in 2014.

“This was a project for the orang asli, using solar lights as well as solar charging for mobile phones. The orang asli community would spend RM1 and lots of fuel to go to the towns to get their mobile phones charged,” says Mathias, who teamed up with other volunteers in the project.

An avid climber, Mathias has travelled to 30 countries and scaled 50 mountains.

“The energy that climbing generates within yourself, in addition to the health benefits, is amazing. It is also a good opportunity to meet people of diverse backgrounds. Travelling also enlightens me, and it is experiential learning that is critical. I sometimes look at best practices in green processes in the countries I travel, to broaden my horizon,” he shares.

Cow dung inspired Cyril Mathias to be a green technopreneur 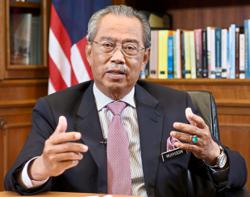