Historical Sentul Depot to be turned into a lifestyle destination

What remains now of the millwright workshop at Sentul Depot. Photos: YTL Land

Even though the whirr, clank and roar of tools and machinery at Sentul Depot died down almost a decade ago, the buzz of the historic engineering hub in its heyday will forever be etched in A. Gnanaprasagam’s memory.

The 80-year-old joined Sentul Works, also known as the Central Railway Workshops, as a chargeman in 1955, retiring in 1994 as a supervisor.

Gnanaprasagam represents the second generation of railway workers; his father first came to Malaysia in 1928 from India to work with the then Federated Malay States Railway (FMSR).

“In the late 40s to early 50s, the railways were not so developed. After that, things changed and the steam locomotives were slowly replaced by diesel and electric ones. Those times, we also manufactured our own coaches,” recalled Gnanaprasagam with pride, adding that Sentul Works was the workplace of up to 7,500 staff.

“We would start work at 7am and lunch time was at 11.30am. Once the gate opened, everybody would walk out together. There were bicycle racks all over too, as the workers would cycle to work,” said Gnanaprasagam, who now lives in Sentul Raya

Gnanaprasagam (left) with his son Daniel, in front of the former mechanical engineering department building. Photo: The Star/Norafifi Ehsan

Despite retiring more than two decades ago, Gnanapragasam still visits the vacant depot now and then. He would go there, take a look at it, and then return home. In fact, till this day, he has kept his nametag, which he proudly wore on his jacket when we met at the Depot recently.

“I am happy this place is not going to be torn down because this is (part) of my birthplace,” said the Sentul born and bred octogenarian, in a quiet voice.

Although it has not been in operation since 2009, Sentul Depot remains the largest train depot in Malaysia till today.

Up until the early 2000s, the workshop was still used by Keretapi Tanah Melayu (KTM) and housed many decommissioned locomotives.

A new central workshop, constructed in Batu Gajah, Perak, replaced the depot in 2009.

Over the next five years, YTL Land will transform Sentul Depot, located in Sentul West, into a “lifestyle destination of Kuala Lumpur, inspired by famous heritage destinations across great cities such as the Meat Packing District in New York and Xintiandi in Shanghai”.

The sprawling 18,580sq m (200,000sq ft) space will be regenerated and made suitable for events like open markets, corporate functions, art and fashion showcases and weddings. The location is also easily accessible via the MRT, KTM Komuter and major highways.

This urban regeneration project is part of the masterplan for the rejuvenation of Sentul West by YTL, which first began in 2002.

“I am very excited about this (rejuvenation project) because this place brings back a lot of memories for me. I have three children, and I bring them here sometimes. I will tell them the railways supported my father, who provided for me and my four siblings. So now, I am all for preserving this place for the younger generation,” said Daniel, 47, who is Gnanaprasagam’s son and an electrical engineer with YTL Land.

“This is such an exciting project for me,” said Pei Teeng, who studied chemistry at Imperial College London.

“When I joined the company, my dad said he had something interesting to share with me and took me to the depot to see it in its raw state. He said we shouldn’t convert it into a property development, but instead turn it into a complex where a series of different events and lifestyle activities can be held,” she added.

“When we first discovered this building, we never thought we’d be so blessed to have such beautiful architecture here. A typical developer would want to tear the place down and build multi-storey buildings.

“But there is always value in these old, heritage buildings, which is something people make mistakes with. We just need to make sure that with the regeneration work, we preserve the interior and the identity of the place,” said Yeoh. He added that places like Xintiandi in Shanghai or King’s Cross in London were once unpopular areas but after they were regenerated, they thrived and even big companies like Google and Facebook came in to set up offices at King’s Cross.

Recently, a bazaar organised by local creative platform Riuh was held at the depot’s main warehouse area in conjunction with Malaysia Day. It was the first time that an event had ever been held there, and marked the first of more events to come.

The Sentul Depot set against the backdrop of The Fennel, a residential development in Sentul. Photo: The Star/Wong Li Za

Guests had the rare opportunity to view the space in its original state before the refurbishment so that after it’s repurposed, people can still identify with it.

In its heyday, six trains were able to pull into the main warehouse area, also known as the hangar for its wide space.

If you look up, zinc roofs which originated from Britain are still intact.

Meanwhile, the roof over the main welding area is designed in a sawtooth style, with the shorter sides of the roof incorporating skylights, also known as northern lights.

As you walk through this area, you will see some of the workers’ old uniforms hanging on the wall, almost as if time has stood still.

Nearby is a yellow signboard indicating the specific times that workers could take a smoke back then.

A signboard seen at the main welding area indicating the specific times that workers could take a smoke back then. Photo: The Star/Wong Li Za

Old uniforms of railway workers still hang on the walls at the main welding area.

Vines enveloping the walls at the former loading and unloading bay. Photo: The Star/Wong Li Za

In addition to millwright workshops, the depot also had workshops that made their own tools back in those days.

Today, having been left idle over the years, plants and even trees have sprouted in various spaces.

In fact, at the loading and unloading bay, vines have enveloped the wall, making it look a bit like Angkor Wat, as a visitor commented.

The newest part of the depot, known as the Metal Shack, was built in the 1960s.

It forms an extension of the old depot and was a place where diesel locomotives were assembled and reassembled.

At the end of the main warehouse area, we were shown some old train tracks which have been recycled as support beams by the British, who first built the depot.

Perhaps those beams best reflect the purposeful adaptive re-use that is planned for the depot.

The History of Sentul Depot

Named after a local tree, Sentul has a long history of being an old railway town established since the late 1800s.

Considered one of the finest integrated engineering workshops in the world, it served the needs of FMSR in the early 1900s and for KTM up to the early 2000s. In its heyday, Sentul Works employed over 7,000 workers.

The 200,000sq ft (18,580sq m) area is dotted by large brick buildings and metal sheds, once used as depots, engineering workshops and storage areas for steam and diesel locomotives and railway cars.

Main activities included the assembly and servicing of railway carriages, with a majority of the parts needed by the rail industry manufactured in its foundry, sawmills and workshops.

In its glory days, Sentul Works, now known as Sentul Depot, even built train parts for the railway network in India.

Sentul was one of the last towns in the country bombed by British planes during World War II.

Weeks before the end of the war in 1945, the depot was heavily attacked by B-29 bombers.

After the war, the workshops were partially rebuilt but sadly, never regained their original glory, with many of the former colonial railway buildings left as ruins.

What is left today is a mix of century-old as well as slightly newer structures from the post-war reconstruction works.

Historical Sentul Depot to be turned into a lifestyle destination 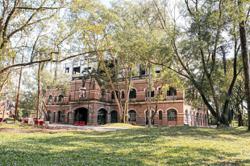 Boutique office amid the greens 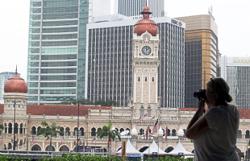 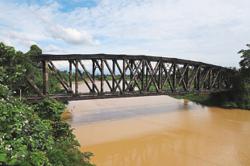