The new international certification programme will cover everything from dogs and cats to farm and zoo animals. — Dreamstime/TNS

Reeling from a string of high-profile mishaps involving pets, the US airline industry is launching a new certification programme designed to improve the safety of animal passengers.

The International Air Transport Association, a trade organisation representing 280 airlines, announced the programme earlier this month. It takes into account both physical and emotional needs across breeds and species in an effort to safely get animals to their destinations.

“Animal owners and shippers rely heavily on airlines to carry their precious cargo,” Nick Careen, the association’s senior vice president for cargo, said in a news release. “As an industry, we have a duty of care to ensure that standards and best practices are in place around the world to protect the welfare of these animals.”

The new certification standard comes in the wake of a series of incidents involving pets travelling on United Airlines, including the death last month of a French bulldog puppy that was stowed in an overhead bin at a flight attendant’s direction on a Houston-to-New York flight.

Chicago-based United suspended its PetSafe cargo programme while conducting a review of its practices and policies that will conclude on May 1. There is no specific date set for pet cargo service to resume, according to airline spokesman Charlie Hobart.

Beyond the airline’s internal review, he said United would look into the new global certification standard. “We’d consider any reasonable recommendation that improves the overall safety and comfort of all animals that we fly,” Hobart said.

The new international certification programme will cover everything from dogs and cats to farm and zoo animals. The association said the certification standards will go beyond physical well-being, taking into consideration “the emotional response of the animals when placed in a special-purpose, if unfamiliar, environment by trained professionals.” – Tribune News Service/Chicago Tribune/Robert Channick 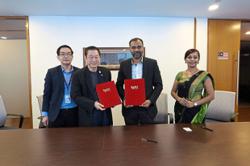 Do the right thing – safety first