View of the KLCC East station of the SSP Line as of September 2017. The construction of this particular station and the tunnels that come with it is very challenging, given that a high-rise tower will spring up after the station box is completed. Photos: MGKT

The successful completion of the 9.5km underground alignment of the Sungai Buloh-Kajang (SBK) MRT Line is a huge feather in the cap for the tunnelling contractor, MMC-Gamuda KVMRT (T) Sdn Bhd (MGKT).

This pair of tunnels hosting seven underground stations has definitely made a great difference to more than 100,000 commuters each day as they traverse this previously underserved corridor.

Civil engineering enthusiasts following the tunnelling work from Kuala Lumpur’s Pavilion area to Maluri near Cheras cannot help but notice that the massive underground endeavour has been completed on both the time and cost targets, while causing minimum disruption to surface activities.

But for MGKT, there is little time to lose as it now focuses on completing its next challenge: a 13.5km pair of tunnels for the Sungai Buloh-Serdang-Putrajaya (SSP) Line, or what is known as Line 2 of the Klang Valley MRT (KVMRT) project.

Targeted for completion in 2022, the SSP tunnels host 11 underground stations, four more than the SBK Line.

The billion-dollar question is: How has finishing one MRT line made it easier to build the next one? The unfortunate answer is that the job does not get any easier.

In fact, MGKT is having it tougher with the SSP Line. For starters, building metros or urban rail, be it elevated or underground, in the Klang Valley is always a tough proposition as the city planners did not set aside a dedicated rail corridor during the formative years of Kuala Lumpur, other than the KTM alignments that were put in long before Malaya achieved independence. 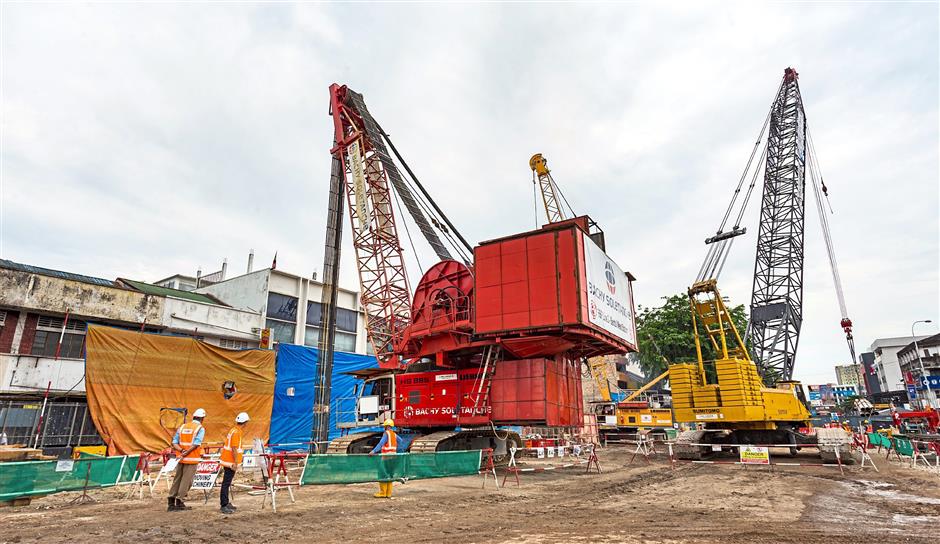 The demanding requirements for the construction of station boxes for the SSP MRT Line are testing the very limits of construction machinery and equipment, with some diaphragm walls routinely reaching 70m to 80m below ground.

Anyone seeking to build a metro now will have to contend with many hundreds if not thousands of structures that have sprung up, given the rapid pace of urbanisation here. The difficulties of encountering many challenges do not diminish even when deciding to go underground.

“In the case of the SBK line, project owner Mass Rapid Transit Corporation Sdn Bhd has to acquire a few dozen properties, reinforcing some, to carry out ground improvement work, in order to build the underground stations and tunnels,” said Dr Ooi Lean Hock, MGKT’s head of geotechnics. 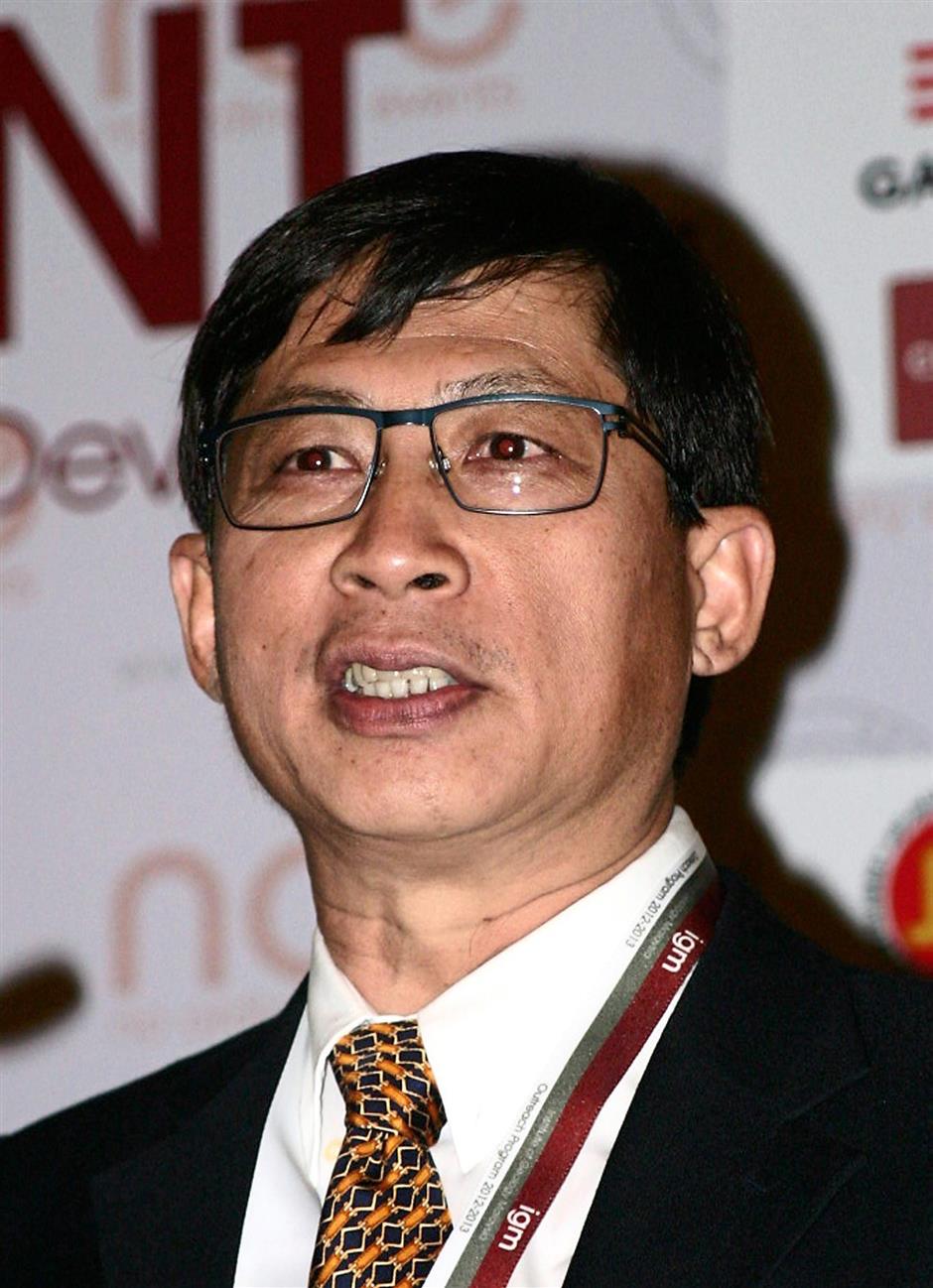 ‘A lot more engineering is involved, and we are developing a good geomechanical model to understand the problems,’ says Dr Ooi Lean Hock. Photo: Filepic

Risks are aplenty for the SSP Line, even for a seasoned tunnelling contractor such as MGKT, with several dozen difficult spots (see graphic below) to contend with along the alignment.

Without doubt, a good part of the risk comes from the different geological conditions encountered this time. If the SBK tunnels traverse well-defined weathered limestone (karst) and Kenny Hill formation (a soil type that is suited for tunnelling), then the equation is much more complicated this time.

Tunnelling through a consistent material, whether consistently hard like solid rock or consistently soft soil, is heaven-sent as very few adjustments are needed to suit ground conditions. This was what greeted MGKT while it built the SBK tunnels, and this streak of “good fortune” has pretty much ended.

Engineers will be dealing with many mixed ground conditions that could prove problematic, even if armed with a dozen of the world’s most advanced tunnel boring machines (TBMs) that were “battle-tested” in the SBK line. Experience elsewhere has already shown that mixed-face ground presents great challenges even for seasoned tunnellers as going through these terrains may trigger off hazards, sometimes with little or no warning.

“We also go through areas where there is substantial thickness of highly weathered limestone, which was not encountered in the SBK line. We have alluvium (loose, unconsolidated soil or sediments), followed by weathered limestone. The latter is a condition that has exhibited higher soil permeability,” said Ooi. 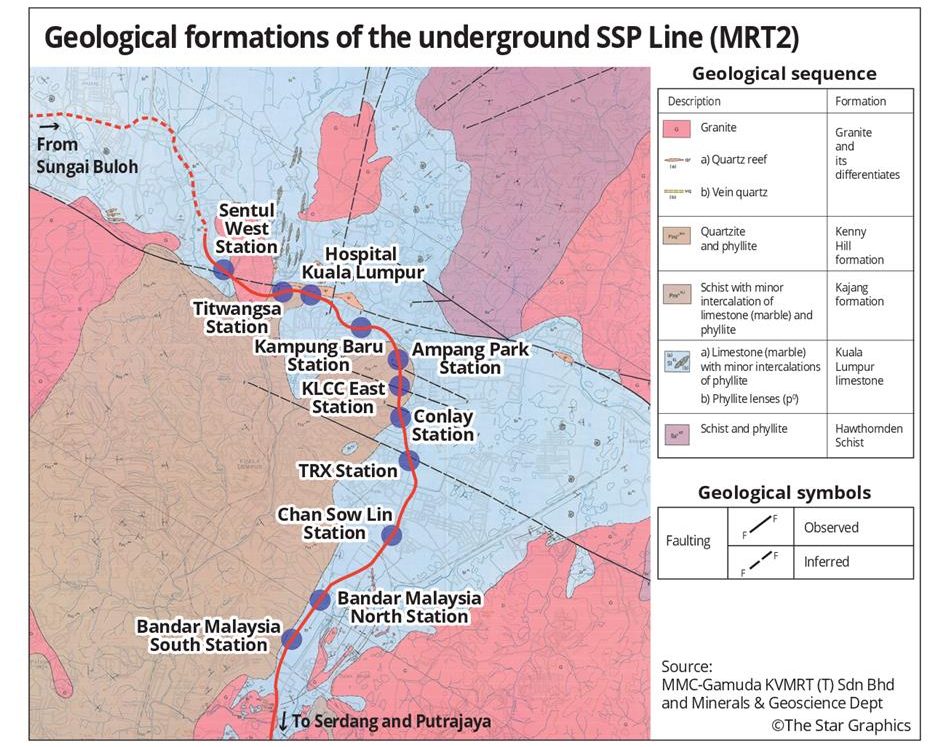 Localised zones of high permeability is not an ideal condition when building underground structures as it makes it difficult to construct support structures such as diaphragm walls, which are typically the wall of the underground station boxes. Construction of diaphragm walls typically utilises a slurry containing a mix of bentonite and water, and this slurry’s function is to support the deep trench dug in the ground. However, if highly permeable ground conditions are encountered, then the slurry could quickly seep through the ground, leaving the trench walls with reduced support.

“This creates a dangerous condition as the trench walls could collapse, and what is next to the trench is usually the plant and machinery,” added Ooi.

The SSP tunnels also traverse seven (both actual and inferred) geological fault lines, which presents another set of problems. Faults are complex zones ranging from metres to kilometres in width, and often consist of seemingly random bands of hard and soft materials, all subject to a variety of geological stress histories.

Fault zones are characterised by the presence of fractured rocks separated by fine materials that are the result of weathering, either by physical or chemical action over a long time. 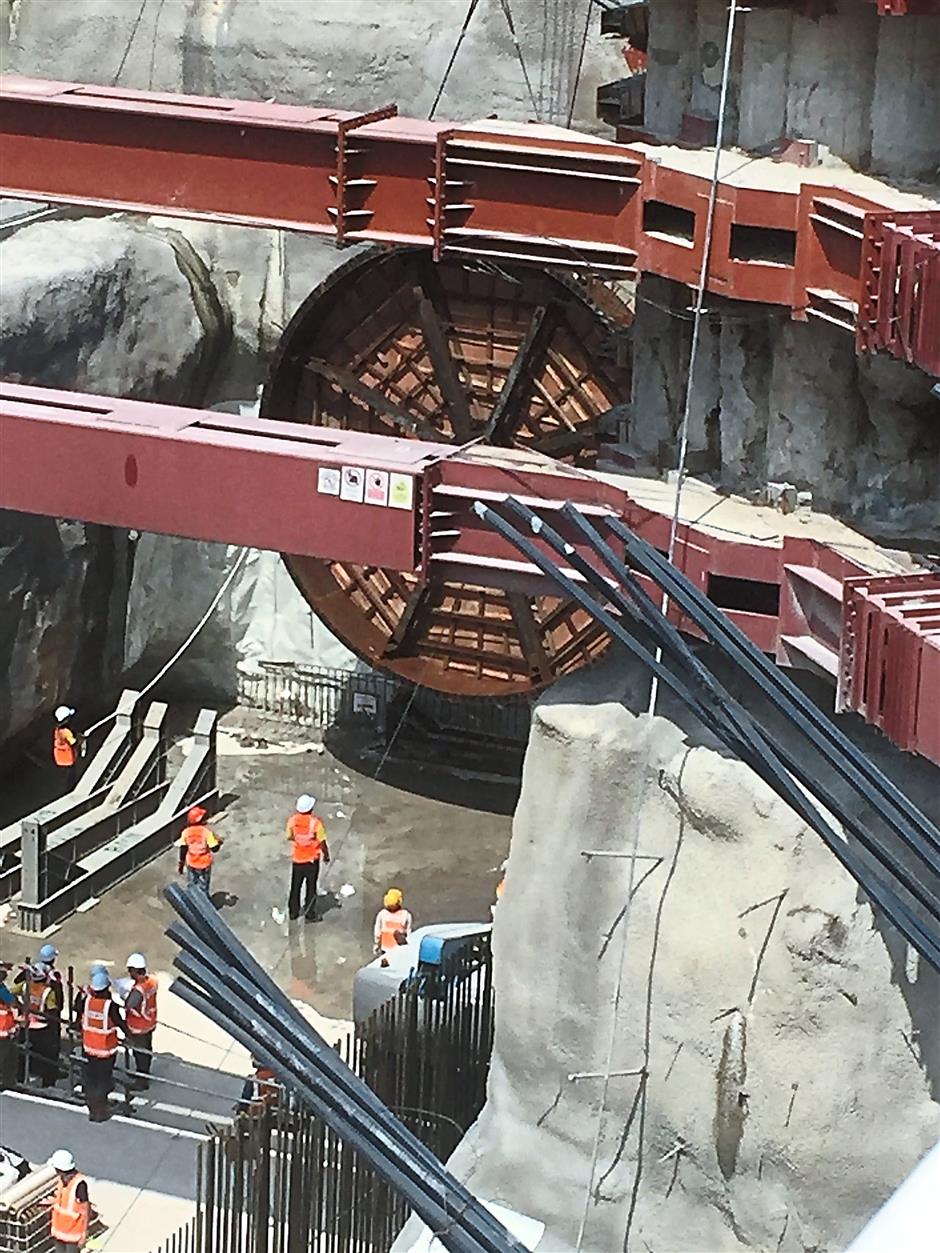 Shuttering pipe has been installed at Bandar Malaysia North in preparation for the launch of the first Tunnel Boring Machine.

TBM tunnelling in fault zones is a major hindrance as it can affect the advance rate of TBM, and sometimes leads to long TBM stoppage if unforeseen ground difficulties are encountered.

Many geotechnical problems can arise when tunnelling through fault zones, and the difficulties include the instability of the face; excessive overbreak and deformation from squeezing and/or swelling faults; instability of intermediate construction stages and, excessive water inflow frequently associated with flowing ground.

“At areas where the Kenny Hill profile meets with weathered limestone that has deep ridges, there could be slump zones (areas where soft or unconsolidated material) awaiting the TBMs. These are weak zones where material cannot consolidate,” said Ooi.

If difficult geological conditions are not enough, then there are additional challenges posed by developments that will take place after the tunnels or station boxes are built. Unlike the SBK line stations, SSP Line stations have to also serve as load-bearing structures for future developments directly on top of, or right adjacent to, them.

This calls for diaphragm walls that are stronger, which means they have to be built deeper and thicker, whereas the walls for the SBK stations were a lot more optimal in terms of depth and diameter.

The diaphragm walls for the SSP line are now very deep, often 70m to 80m below ground level. For example, the upcoming Ampang Park MRT station’s diaphragm wall is up to 85m deep, and this after a lot of optimisation work by Ooi’s team.

“This is pretty challenging, given that we are already nearing the limits of both plant and machinery. Coupled with this is the fact that the reinforcing steel cages for the diaphragm walls are massive. This calls for the use of very large cranes, making site logistics a lot more challenging,” he added.

Another advantage of SBK stations is that part of the load could be passed on to the platform edge column.

No such “advantage” is conferred by the SSP stations, as they are column-free, meaning all loads go to the walls.

“The spans will be larger, so the slabs will be thicker. Everything becomes heavier. The combination of all these factors make things much more difficult. With all these, we have hit the limit of construction machinery for diaphragm walls and bored piling,” said Ooi. 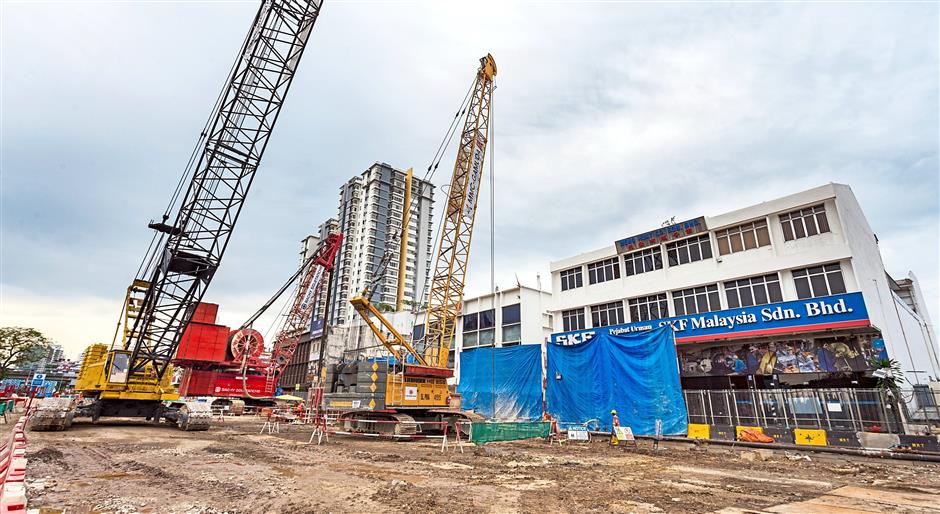 View of the upcoming Sentul West station. The construction of the underground portion of the SSP MRT line is testing the limits of plant and machinery as there is a need to mitigate many risks.

Even as the SSP tunnels and stations are built, MGKT has to talk with dozens of contractors building other infrastructure near the alignment, or those that will be starting work shortly after the tunnelling and station works are completed.

The creation of a smooth working relationship between dozens of contractors carrying out several dozen tasks beside, over or under each at various times of the day calls for a good level of understanding and coordination, and more so for a complex project such as the MRT.

Successful interface management is a crucial component for a successful construction project as many interface problems may arise in the course of a complex project, and the degree of severity can affect the overall project performance in terms of speed, costs and even safety.

Just for example, at the KLCC East station, a new high-rise tower will also be coming up shortly after MRT work starts. “The interfacing is complex, and it is inevitable that the pressure bulb from the tower foundation system will have some impact at the station and sophisticated analyses and design to simulate the construction sequence to minimise the impact to an acceptable level,” said Ooi.

And then, there is the task of protecting existing high value developments from damage during construction, and these range from critical infrastructure such as the tunnels of the Kelana Jaya LRT line, the piers of the Express Rail Link, the KL Monorail, and the DUKE Expressway, just to name a few. And one point, the SSP tunnels will also have to go under a river.

“It never gets easier, as there are many balancing acts to fulfil,” Ooi added.

All about risk management

The approach to multiple construction risks is not to avoid them altogether, but to carefully manage each of them within the constraints of cost, time and buildability. 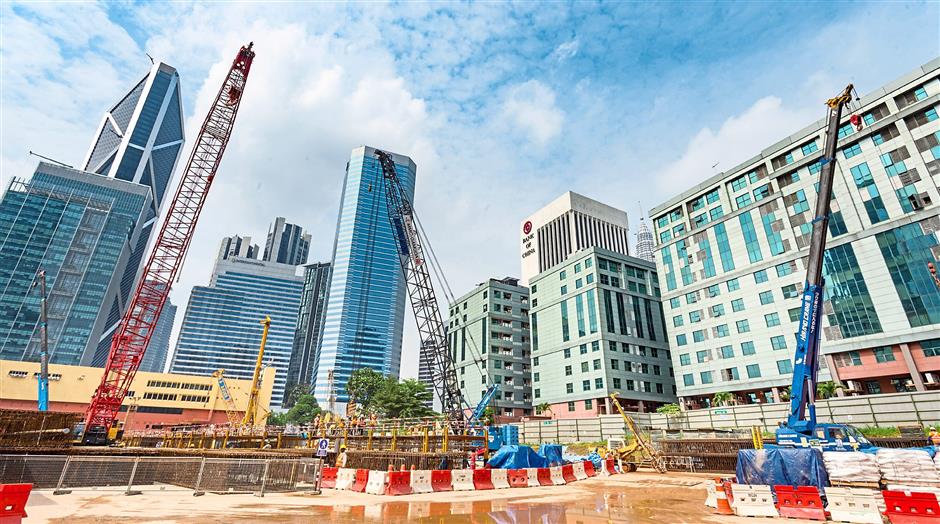 View of the future KLCC East station of the SSP MRT line.

Ooi’s team exercised extreme caution as they pored over soil investigation data to map out the rock properties and work with the tunnelling team and to predict the rock-machine (TBM) interactions so that they could determine the best maintenance and operating mode for the TBMs in order to optimise tunnel boring operations.

And as topside developments will feature for the SSP line, the role of load testing of foundation elements in the ground becomes paramount.

“A lot more engineering is involved, and we are developing a good geomechanical model to understand the problems. Having understood the problems, then you would have a chance of devising a scheme to counter the expected problems,” said Ooi.

With quite a few “possible unknowns”, MGKT will resort to continuous monitoring of critical parameters while work is ongoing, rather than mindlessly adopting extremely conservative construction measures as it works its way through the difficult terrain – an approach Ooi puts as a mix of “art and science”.

“It is about engineering to achieve the desired outcome, rather than following textbooks blindly, or unthinkingly ticking off a checklist.”