Awash in plastic: A beach in Accra, Ghana, fouled by plastic waste. The world is using more and more plastic but without a similar increase in waste collection and recycling effort. Photo: EPA

We have all heard about the huge amounts of trash which we leave in our oceans. But the man-made islands of mostly plastic litter that we can see is only a fraction of the problem. What’s more dangerous is what we cannot see – tiny bits of plastic as small as a pin head or finer than a strand of hair.

Studies have found an abundance of these microscopic plastics in rivers and seas, and in the stomachs of everything from zooplankton to fish, seabirds and whales. They are even in places as remote as a Mongolian mountain lake and sea sediment 5km below sea level.

One study estimated that every square kilometre of the world’s oceans has over 63,000 microplastic particles floating at the surface. When eaten by marine organisms, the microplastics make their way up the food chain – possibly ending up on our dinner plates.

Microplastics not only foul beaches and seas, but pose a health hazard to marine organisms and humans. Photo: Reuters

At the conclusion of the assembly, delegates called on UNEP to develop action plans to target marine plastic litter and microplastics, with emphasis on regions that are the largest sources. They also resolved to encourage manufacturers to consider the life cycle and environmental impacts of products containing microbeads and compostable polymers.

The Frontiers report, which compiled the latest research findings related to microplastics, revealed that 11% of the 2.5 billion tonnes of trash discarded worldwide in 2010 were plastics. Of that, between 4.8 and 12.7 million tonnes end up in the ocean due to poor handling of waste.

Microplastics are either manufactured for domestic or industrial purposes (such as microbeads in personal care products or as abrasive material) or formed from the weathering of larger plastic products by UV radiation, wind or waves.

In the ocean, plastic waste does not biodegrade in spite of the harsh environment. It only breaks up into tiny bits. Exposure to UV radiation, oxygen, high temperatures and microbial activity for an optimal duration can biodegrade some types of plastic. However, many plastics labelled as biodegradable – including single-use shopping bags and take-away food containers – will break down completely only when subjected to prolonged temperatures above 50°C. Such conditions can only be produced in an industrial composter and are rarely met in the marine environment, according to a UNEP report.

In the late 1990s, manufacturers began to use microbeads as abrasives in facial cleansers, body scrubs, toothpaste, shaving cream and other personal care products.

By the mid-2000s, researchers studying water quality started seeing microbeads in public water reservoirs and natural environments. Without appropriate wastewater treatment to capture the plastic particles, microplastics have become a major pollutant. Following public awareness campaigns, some producers in Europe and North America have removed the material from their products.

However, similar particles are still released into water bodies from other users, such as the microplastics used for surface blasting to remove rust, paint and other unwanted surface coverings on buildings, cars, ships and aircraft.

The plastic abrasives are used repeatedly but eventually break down to unsuitable size and are discarded. By then, they are usually contaminated with heavy metals from the surface covering, such as cadmium, chromium and lead.

We also pollute the sea with what we wear – clothes made from synthetic fibres are sources of microplastic. Plastic fibres – from polyester, acrylic and polyamide fabrics – are shed from garments in washing machines and discharged in the drained laundry water.

The Norwegian Environment Agency found that more microplastics are discharged from synthetic clothing than from personal care products. Experiments show that a single wash of one synthetic garment releases over 1,900 microplastic fibres. These fibres pass through screen filters used in wastewater treatment facilities, ending up in sludge, streams, and eventually, the sea.

Clothes made of synthetic fabrics are a major source of microplastics as they shed fine fibres during washing. Photo: AFP

Scientists are racing to understand how all that microplastics in the oceans affect marine organisms, how much is accumulated, and what chemicals are released when they degrade. Even more worrying, we are uncertain what effects consuming food contaminated with microplastics has on human health.

A study led by the University of California, Davis, found that a quarter of the marine fish sampled in markets in Indonesia and California have plastic debris and textile fibres in their guts. Microplastics, especially synthetic fibres, have also been detected in drinking water, beer, honey, sugar and table salt.

Chemical additives are often used in plastic manufacturing to generate desired properties to make the product rigid, malleable, waterproof or flame or UV-resistant. When marine organisms ingest microplastics, they also absorb the chemical additives, according to the Frontiers report. At high enough concentrations, these chemicals can cause poisoning, stunted growth and infertility.

Its not fiction. Marine organisms can ingest microplastic particles, as this perch larvae has done. Photo: Reuters

Many chemicals of concern, such as heavy metals and persistent organic pollutants (POPs), lurk in the marine environment, and are taken up by marine organisms. Research showed that harmful and persistent substances both bioaccumulate over time and biomagnify as predators eat prey. In this manner, seafood can become contaminated, particularly those higher in the food chain, such as tuna and swordfish.

POPs have adverse effects on the environment and human health, and include pesticides such as DDT, industrial chemicals such as polychlorinated biphenyls (PCB) and incineration by-products such as dioxins and furans. Many POPs are hydrophobic, meaning they are repelled by water. When these chemicals encounter plastics in oceans, they are absorbed into the plastic surface.

While research into the interactions between microplastics and sea organisms is underway, efforts to stem the flow of plastics into the sea must continue. More so as the world continues to consume lots of plastics – in 2014, global plastic production exceeded 311 million tonnes, a 4% increase over 2013.

Various initiatives to curtail marine litter are under way. The Netherlands will be the first country to be free of microbeads in cosmetics by year-end. The United States will follow suit by July 2017. The Beat the Microbead initiative has developed a smartphone App which allows consumers to scan the bar code of personal care products to check for the presence of microbeads.

A European Union project, Mermaids, is investigating technologies that can prevent the breakage of fibres from garments through innovative textiles or detergent additives.

Manufacturers of washing machines can improve the filtering function of their products to better capture microscopic fibres from the rinse water. The textile industry, too, has a role in developing synthetic textiles that shed fewer fibres, or simply minimise the use of synthetic material in their products.

A plastic-industry-driven effort, Operation Clean Sweep aims to prevent raw plastic materials such as pellets, flakes and powder from entering the waste stream through better containment, reclamation and proper disposal. The shipyard, aviation, and automobile industries can reduce microplastic pollution by containing and properly disposing spent abrasive blasting materials and the dust generated from their activities.

Meanwhile, the Ocean Cleanup project aims to use ocean currents to divert all that floating debris towards a net, held up by buoys. Trials using a prototype are starting in the North Sea. Still, it is always better to prevent the plastic waste first rather than to clean it up. 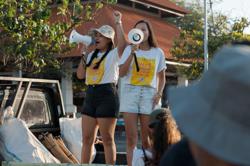 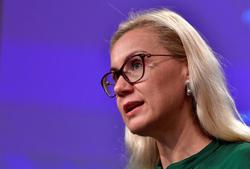