At one mall, food waste is segregated for composting 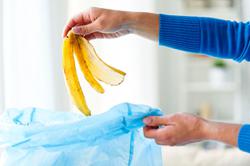 When composted, food scraps become a resource instead of waste. Photo: The Star

A handful of restaurants in Setia City Mall in Selangor are taking responsibility over the food waste that they produce, with the help of the mall management. When you dine in one of these eateries, you can be assured that your leftovers, as well as the waste that comes from the preparation of your meal, will be properly handled. It will not end up rotting in a rubbish dump, releasing gases that cause global warming, but will instead, be processed and recycled into useful fertiliser.

Lots of trash is generated in malls all over the country. Mall management companies typically hire waste contractors to handle the waste – recyclables such as plastics, cardboard and metals are removed, while the rest is dumped. But the Setia City Mall (SCM) management chose to do more. Aside from weeding out the recyclables, it insists on channelling the organic portion of the waste away from landfills.

This entails working closely with its food and beverage (F&B) tenants so that the organic waste (mostly food scraps) is separated from other waste, and then sent to a plant for composting. The goal here is to avoid dumping food waste in landfills, where it decomposes and produce methane gas.

Figures from the United Nations Environment Programme shows that food loss and waste is responsible for about 2% of global greenhouse gas emissions. It also consumes 21% of all fresh water, 19% of all fertiliser, 18% of cropland and 21% of landfill volume.

Proper handling of food waste was a focus right from the planning stage of the mall in Setia Alam, says mall general manager Philippa Holmes. “Food waste is a huge global issue that contributes to the increasing need for landfills. Prior to the mall’s opening in 2012, we have been engaging and educating retailers on waste segregation and the need to reduce waste to landfills. This has helped to get them on board the programme. Our F&B tenants are generally bigger generators of waste, hence the focus to work with them.”

To get the green programme going, the SCM management provided waste segregation training to most of its 69 F&B tenants (including food kiosks). In the end, 20 opted to participate in the voluntary effort. Of these, 12 tenants are giving it their full support: Pappa Rich, Seoul Garden, Iciban Boshi, Teppanyaki, The Chicken Rice Shop, Subway, Johnny’s Restaurant, Simple Life, Pat Kin Pat Sun Cafe, Fruitilicious, Boost Juice Bars and Urban Fresh (supermarket).

Every day, these outlets drop off some 500kg to 600kg of kitchen discards at the recycling dock of the mall. Workers then go through the bins to remove any remaining non-organic waste that cannot be composted. Promise Earth, the company engaged to compost the waste, picks up the waste daily.

At the Teppanyaki restaurant in Setia City Mall, workers diligently segregate food waste from other trash. Photo: The Star/Art Chen

Every month, some 15.4 tonnes of food waste – a quarter of what is generated at the mall – end up in a composting machine call the Bio-Mate rather than the dump. The scheme does not incur any cost for the tenants as it is covered under the annual budget of the mall management.

The attention on food waste, which forms a huge chunk of the total discards in the mall, goes back to 2014 when the mall operator purchased a Bio-Mate composting machine for use on-site. But it soon found teething issues – the 250kg daily capacity of the machine was too small, it took up space at the recycling dock, has to be operated by trained workers, and getting the compost in the right consistency was difficult.

The management decided that sending the waste to the central Bio-Mate plant in Klang Utama, which is not far away, was the best solution as it can handle larger volumes of food waste, up to eight tonnes (8,000kg) a day.

There, the waste undergoes another round of filtering to remove any left-over plastics or metals before being chopped up. It then goes into the composting machine and sawdust is added. A pedal churns the mixture which is heated up to around 90°C. The high temperature, and the addition of microbial enzyme, speed up the breakdown process. Within a day or two, the waste is reduced to powdery compost which is packed and sold as fertiliser.

The benefits of composting food waste is not obvious to everyone, however. Not all the F&B tenants understand the reason for segregating the waste. Says the manager of one restaurant: “It’s a requirement by the mall. They want us to do it, we have to follow.”

The Bio-Mate composting plant can handle 250 tonnes of food waste a month.

Jaron Keng, waste management consultant to the mall, says some outlets which declined to take part question the need for waste separation; others say they have no space for another bin and that it is time-consuming.

Though only a fraction of the food waste at the mall is properly treated, Keng sees it as an achievement as to start with, little organic waste is recycled in the country.

Despite regular training on waste segregation, non-organic stuff still gets into the food waste bin. Photo: The Star/Art Chen

Holmes is hopeful, sharing that the amount of segregated food waste is growing and more outlets have shown interest. “The outcome is good for something that is voluntary. We have focused on the bigger contributors, which will give better impact.”

She says changing the tenants’ mind-set is the biggest challenge so far. “The concept of food waste segregation is still new here and it takes time and education to get them on board. There is a need to illustrate the benefits of the initiative to the tenants, so they can implement these initiatives in their outlets in other malls.”

Regular training of workers on waste separation is important. Frequent staff changes mean that waste is not thoroughly segregated, which is why there are two more rounds of filtering – at the recycling dock and at the composting plant – to fish out any remaining inorganic stuff. “It’ll get easier when people get used to recycling and it becomes second nature,” says Holmes.

Food waste is not the only thing that gets recycled at the mall. At the recycling dock, there are containers for different categories of waste – paper, plastic, cooking oil, aluminium, light bulbs and e-waste. The mall has diverted a quarter of its total waste from landfills, and aims to raise this to 30% over the next 12 months.

Apart from SCM, Promise Earth also handles kitchen scraps from two hotels in Kuala Lumpur – Royale Chulan and Renaissance. However, it stopped servicing two malls in the city as the waste was not well-separated. “Some bins contained as much as 60% non-organic materials. We were spending too much time and effort to further segregate the waste,” says marketing director Enson Chong.

Food waste is transformed into beneficial compost through the Bio-Mate process.

Its central composting plant can handle 250 tonnes of food waste a month and also processes waste from the poultry and fish industries, as well as discards from the pasar borong in Klang.

Prior to starting its central processing plant last year, it was mainly marketing small composting plants which are installed on-site, such as at Sutera Mall in Skudai, Johor, and a resort in Berjaya Hills, Pahang. The Subang Jaya Municipal Council and Putrajaya Corporation also use Bio-Mate plants to handle waste from food courts.

Operations general manager Yu Shih Huei says the aerobic fermentation process transforms waste to fertiliser within 24 to 48 hours, compared with conventional composting which needs around 12 weeks. Despite the high temperature used, he says it is not a cooking process but the breaking down of food waste via fermentation.

Analysis by SIRIM, the standards and industrial research body, on the Bio-Mate process showed the release of only a small concentration of carbon dioxide (CO2) from living organisms, and no methane. Greenhouse gas emissions from the process come from transportation (of raw materials and end product), electricity usage and combustion of diesel. Nevertheless, Sirim found composting to be a more climate-friendly option than landfill disposal – composting each tonne of food waste emits 308kg of CO2 compared to the 1,213kg of dumping it.

In fact, countries such as Austria, Germany and Belgium have banned organic waste from landfills in a bid to avoid pollution and not waste a resource. And that is certainly something worth considering here.

At one mall , food waste is segregated for composting 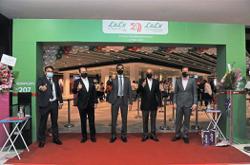