These Malaysian researchers want to invent technology just for seniors

When it comes to technology, the common perception is that older people, specifically senior citizens, have a more difficult time accepting and learning how to use it. (Hands up, anyone who has ever said to a younger person, “You do it for me lah”, or has had this said to them by an older relative, with regards to something technology-related.)

Of course, this is not true for all older people; some of them gleefully and enthusiastically embrace new technology, while others are quite willing to make use of it once someone teaches them how to do so.

Shares Monash University Malaysia Gerontechnology Lab lead researcher Associate Professor Dr Teh Pei Lee: “Because anything you do, it deals with technology. Even if you want to cook a meal, you have to rely on technology.

“So, some of my participants, when they come for the workshop, they are actually very keen to learn, because they don’t want to depend on people.

“But, of course, when we go to some of the nursing homes, they (the residents) have a negative attitude where they don’t want to learn.

“So, it’s just the personal factor.” 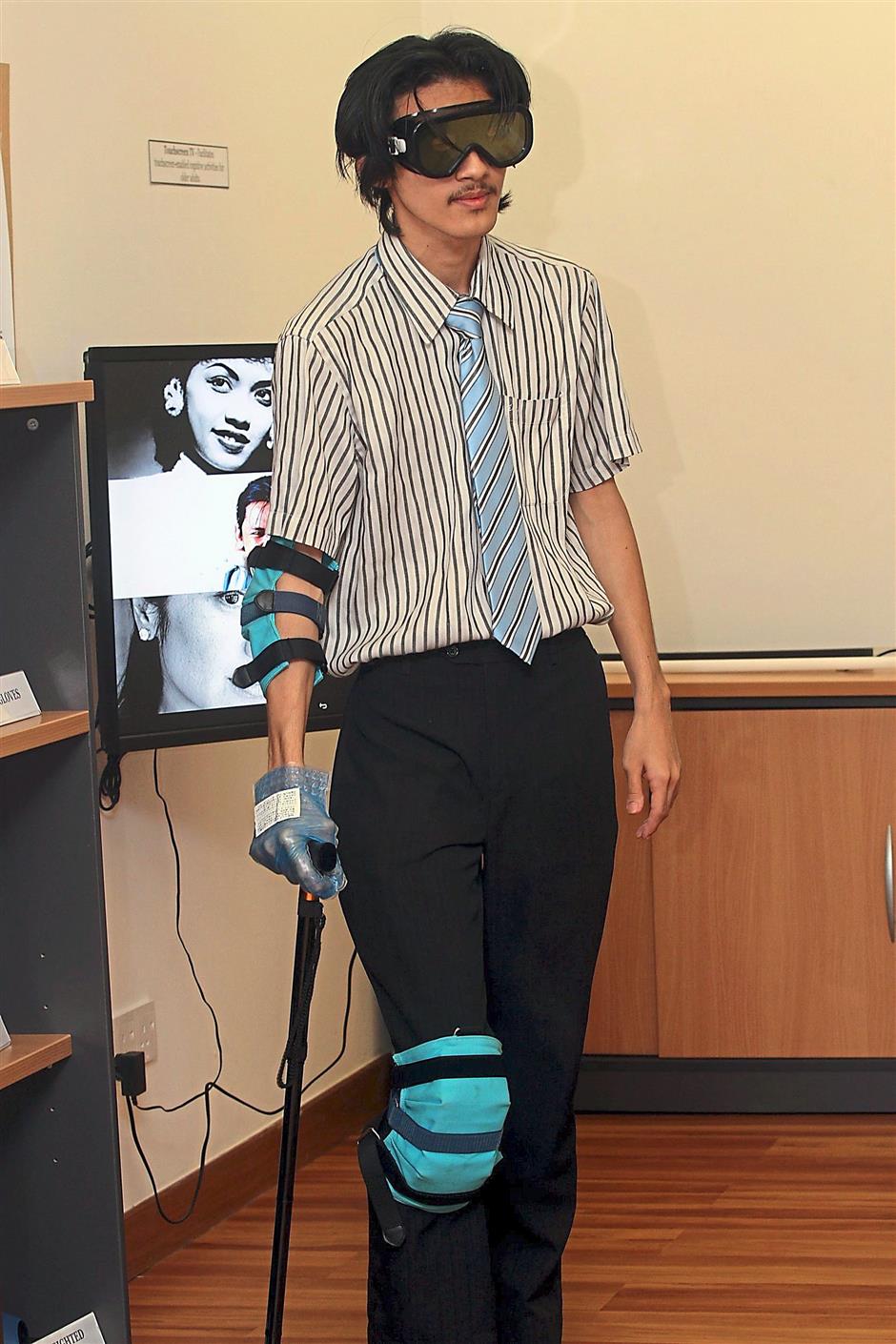 Monash psychology student and volunteer research assistant at the Gerontechnology Lab, Jeffery Yeow Teh Thiry, demonstrating how components of the Age Simulation Suit - vision-limiting goggles, elbow and knee weights to simulate weak muscles, and gel gloves that simulate loss of sensation and temperature - allow younger individuals to experience body ailments the elderly may have.

As the point of technology is to make our lives easier, it is particularly important for senior citizens, who can use it to help maintain their independence and overcome the ailments of age.

This is especially so in Asian countries like Malaysia, where many elderly folks tend to remain at home, rather than live in nursing homes or old folks’ homes.

With many countries facing an upward trend in their ageing population (including Malaysia), it is not surprising that the new field of ge- rontechnology has quickly developed over the last few decades.

It covers five domains: health and self-esteem, housing and daily living, mobility and transport, communications and governance, and work and leisure.

“So, we are looking at technology that can actually support all these activities,” says Assoc Prof Teh.

Attached to Monash’s School of Business and specialising in technology management, she deve-loped a strong interest in gerontechnology in 2013.

This interest spurred her to apply for a government grant to design and develop an interface to help elderly people control their home environment more easily, which she subsequently received.

The result was the Smartphone Home System.

Using near field communication (NFC), this system enables home electrical appliances like lights, televisions, radios and air-conditioners, to be switched on and off via a smartphone application (app).

This app can also be launched automatically through a photo interface, where the user places their smartphone over the photo of the appliance they wish to activate, making it easier for elderly persons who might be intimidated by the act of opening an app on the smartphone. 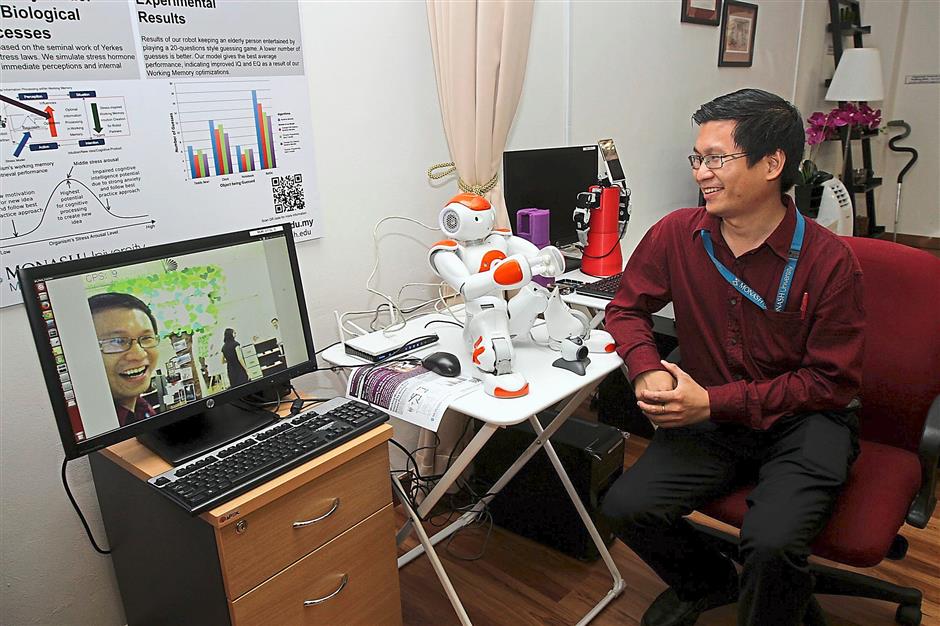 Monash Information Technology School PhD student Tang Tiong Yew demonstrating his doctorate project, Emotionally Intelligent Robots for the Elderly, at the Gerontechnology Lab. The robots are meant to entertain the elderly, and help maintain their social and cognitive skills. Tang says a simple robot using a smartphone as a head (right) can be built quite cheaply.

Assoc Prof Teh points out that the use of a photo interface also helps to remove any possible language or literacy barrier, especially for Malaysia’s multilingual society.

This home system can also be controlled using an NFC Set-Top-Box, which allows control of electrical appliances through the tapping of a smart card on the box.

Shares Assoc Prof Teh: “While I was doing this work, I visited a few countries like Singapore, Hong Kong and Taiwan, where they have done so much work in this area.

“I visited their labs, and I thought that Malaysia needed a platform like that, to encourage more researchers to do research on ageing.”

Upon coming home, she spoke with some of her colleagues, and with the support of Monash and industrial partners, the Gerontech-nology Lab was born.

According to her, the four-month-old lab is the first of its kind in Malaysia.

It is a space where researchers of different disciplines can come together to work with each other and industry partners, on projects that develop technology to help enhance the independence and well-being of older people (i.e. those aged 60 and above).

In addition, the lab aims to offer workshops and talks on gerontechnology for the public, as well as assessment and consultation services on home safety and facilities for the elderly.

In fact, their first workshop for senior citizens on how to use smartphones was held in April.

Assoc Prof Teh also hopes to get senior citizens and relevant non-governmental organisations (NGOs) to help the researchers in their work.

“Oftentimes, you see that commercial technology doesn’t get input from older adults.

“So I think the input from older adults is really important to help us modify the devices so that it becomes easy to use.”

She gave the example of the NFC Set-Top-Box, which was initially just a plain, white box. 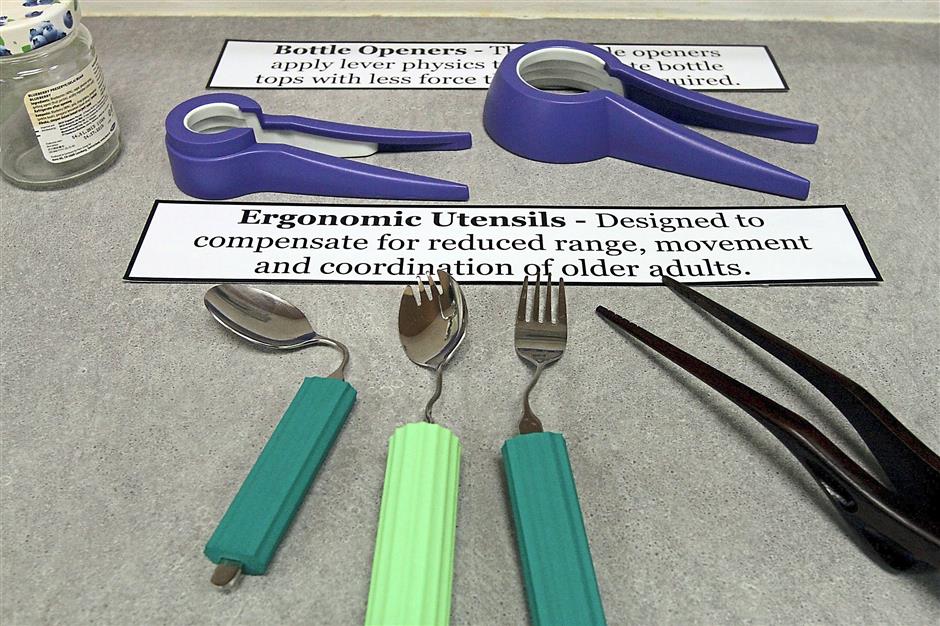 An example of a adaptable, shock-proof power socket that helps prevent electrical accidents in kitchens with elderly or young users located at the kitchen station in the Gerontechnology Lab.

“We collected feedback from the participants saying that, ‘I don’t like something square and white’.”

Instead, the senior citizens wanted a friendlier-looking shape for the device, and colours other than black or white.

Now, the Set-Top-Box comes in the shape of a red ladybug, produced economically through 3D printing.

“Getting NGOs and seniors to come and participate in our research is really helpful,” she says. 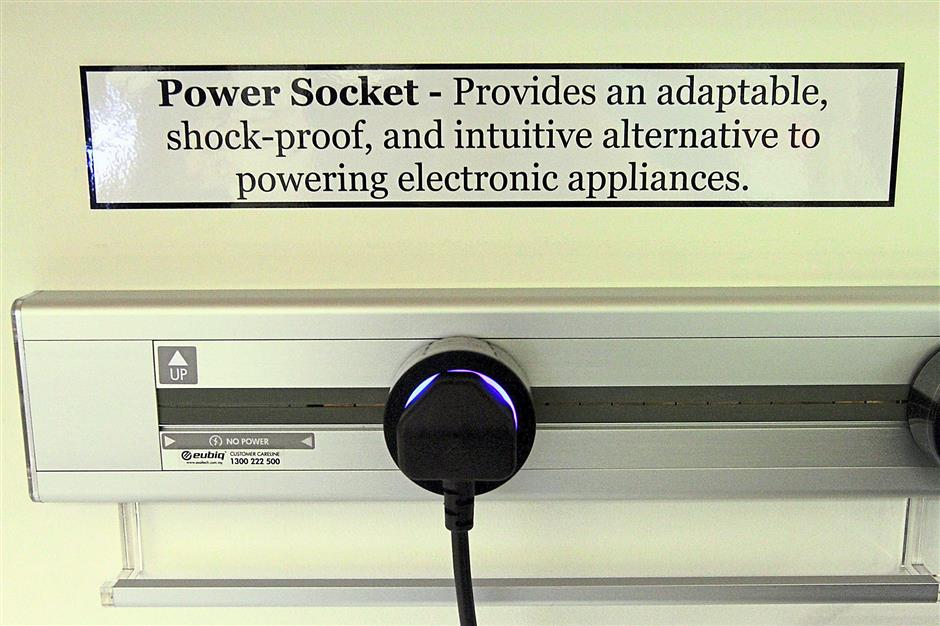 A display of modified eating utensils (bottom) and bottle openers (top) for elderly people with mobility problems at the Gerontechnology Lab.

Currently, the lab has 11 active researchers, and four ongoing and completed projects.

It also has a Living Hall Station and Kitchen Station featuring the Smartphone Home System and senior-friendly furniture, design and apparatus, as well as a Cognitive Station with a touchscreen TV with cognitive activities for senior citizens and an Age Stimulation Suit that mimics the physical ailments of age.

“We are also working with other schools (in Monash) – Arts and Social Science, Medicine and Health Sciences – to think about the possible further research to be carried out in this lab,” says Assoc Prof Teh.

“We need to prepare to face the challenges of an ageing society.

“I believe this lab will eventually have a higher societal and community impact for Malaysia.”

These Malaysian researchers want to invent technology just for seniors