Are you smart enough for Mensa?

Mensa questions. Can you figure it out?

Think you’re a bright spark? Why not try out for the MENSA admission test?

To be a member of Mensa, one must take a supervised IQ test. The test is based on Raven’s Advanced Progressive Matrices, and comprises 36 questions, to be completed in 40 minutes.

The questions are objective, and are based on geometric diagrams, with no mathematical or language knowledge needed.

Mensa questions. Can you figure it out?

Note that the IQ test is designed for individuals aged 14 and above only; children aged 12 and 13 will require parental consent to take the test. While some countries hold supervised testing of children below 12, the Malaysian Mensa branch currently does not have such tests available.

Upon getting a test score of 148 and above – which means your intelligence level is in the top 2% – Malaysian Mensa will send you a letter of invitation to join the society. After you have paid the RM70 annual membership fee, you will then become a member.

Should you not qualify for Mensa, you are allowed to retake the test after 12 months.

Regular testing sessions are held at Eye Level SS2 (No. 74, 2nd Floor, Jalan SS2/60, Petaling Jaya, Selangor) at 2pm on the second Sunday of every month. There is a testing fee of RM50. You will have to produce your MyKad or IC (or passports for non-Malaysians).

For more information on Mensa IQ testing, including testing in other states, visit mensa.my/test-info or contact the Mensa National Testing Coordinator at 012-422 0573.

Quick facts about Mensa and IQ

> The youngest current member of Mensa, American Alexis Martin, is only three years old. Her parents noticed that she was different from most children when she was able to recite her bedtime stories verbatim at a year old. Her IQ is 160.

> Acclaimed science fiction author Isaac Asimov was a long-serving member of Mensa, and was vice president of the society for a term.

> Mensa member Marilyn vos Savant of the United States was the last person to be listed in the Guinness Book Of World Records under “Highest IQ”. Her IQ is said to be 228. She held the record from 1986 to 1989 until Guinness retired the category in 1990.

> A person’s environment, including nutrition, socio-economic status, stress, mood, and attitude towards life can affect their IQ. Studies have shown that students studying at financially stable schools are likely to have higher IQs than those in poorly funded schools.

Are you smart enough for Mensa? 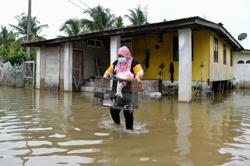 Even a pandemic can’t stop the growing popularity of modern-day treasure hunting
Here's why you need to clean your kitchen cloth often
Only 2 ways you're likely to accidentally kill your succulents
3 alternative advent calendar ideas for kids
Helping a stray cat to survive
Mobile, modular houses: What if you could just add an extra room when you need more space?
Purr-fect petting: How to bond with cats
Tragic phenomenon of animal hoarding
Giant bus crosses Iceland's threatened glacier
Stinky kisses from the dog could mean something more sinister