No liver abnormalities were detected in the CT scan (left) of a breast cancer patient initially diagnosed with stage 2A breast cancer. However, the 18F-FDG PET-CT scan (right) picked up a lesion in the liver (the bright spot), which upstaged the cancer to stage 4. — Photos: Dr ALEX KHOO CHEEN HOE

It's coming up to two years since Covid-19 first broke out in Wuhan, China, and we all hope that the end of this catastrophic pandemic is near.

Lest we forget, we also have other health issues to deal with, such as tuberculosis, heart disease, diabetes and cancer.

Cancer is a leading cause of death worldwide and can affect anyone, regardless of race, gender and income level.

Unfortunately, cancer cases are on the rise worldwide.

According to the latest National Cancer Registry (2012-2016), the lifetime risk of cancer in Malaysia is one in 10 for males and one in nine for females.

Breast cancer accounted for 19% of total new cancer cases over the five-year period, making it the most common cancer in Malaysia.

In fact, the number of new breast cancer cases had increased by 18.8%, compared to the previous five-year period.

Despite significant breast cancer awareness initiatives, many patients still present with advanced stages of the disease.

The registry recorded 25.8% and 22.1% new patients with stage 3 and 4 cancer respectively.

These figures might just be the tip of the iceberg as there are probably many more unreported cases out there. 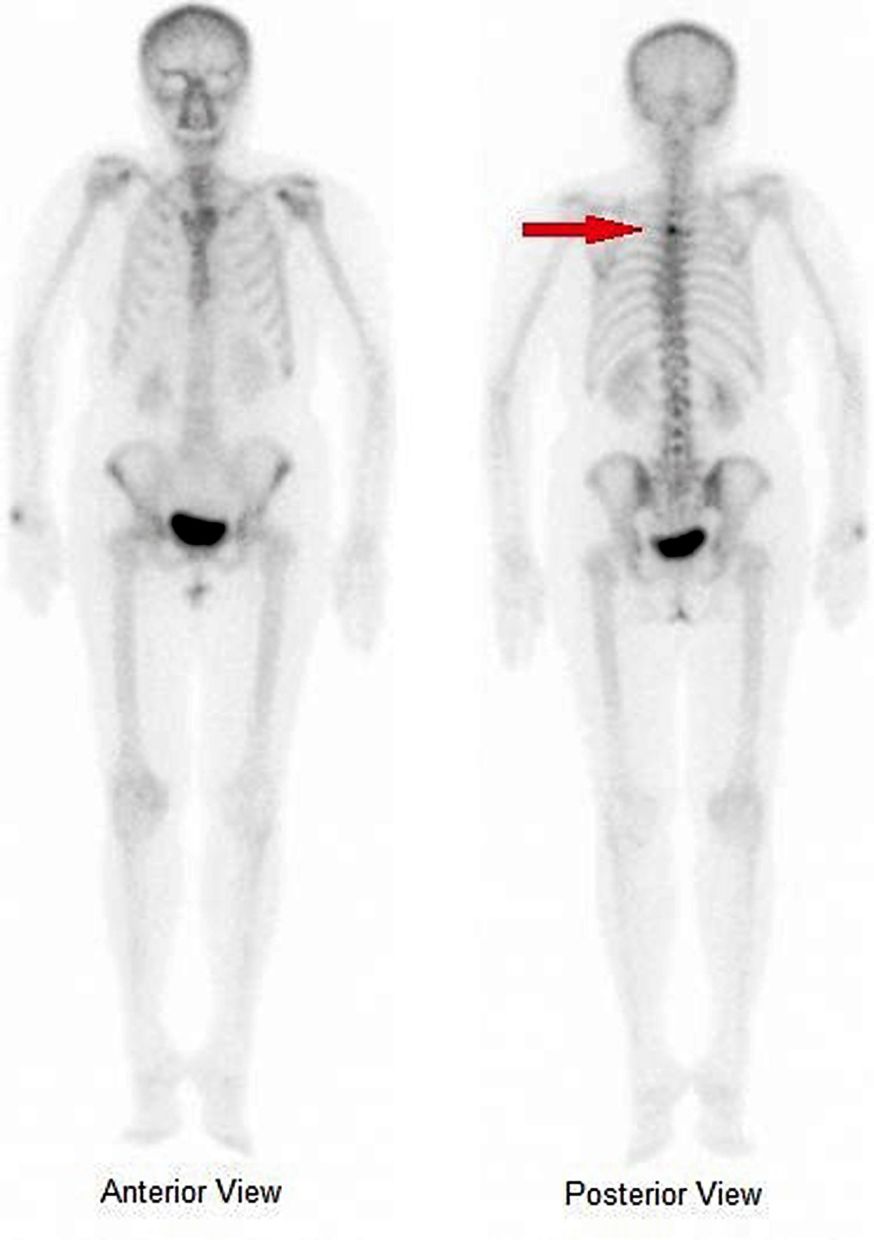 This bone scan shows a focal lesion in the thoracic vertebra (red arrow), which was not detected by a CT scan, resulting in the patient’s breast cancer being upstaged from stage 2 to stage 4.

With complete staging, oncologists can plan the best care for the patient.

The oncologist would be able to decide if there is a need for chemotherapy before or after treatment, and if radiotherapy or other targeted therapies are needed.

Wherever available and appropriate, nuclear medicine studies, such as bone scintigraphy and positron emission tomography (PET)-CT, should be utilised as they can provide a more thorough staging.

These studies have been frequently shown to change clinical management, either by upstaging (detection of more cancer sites) or down-staging the cancers.

Studies have shown that bone scintigraphy – also known simply as a bone scan – is able to detect changes as little as 5% in bone turnover.

On the other hand, approximately 40-50% of bone mineral must be lost before lucency (destructive changes) can be detected in the bone through X-rays and CT scans.

The commonly-used radiotracer in PET-CT, 18F-FDG, is a glucose analogue.

As cancers are energy (glucose) consuming, the use of 18F-FDG enables clinicians to detect metabolic changes that occur much earlier than structural changes.

If the treatment fails, changing to another treatment early would be beneficial.

Likewise, overtreatment is undesirable and may be detrimental to patients.

In patients with early breast cancers, surgeons tend to use sentinel node lymphoscintigraphy as a guide to decide on the removal of the axillary lymph nodes, which the breast drains into. 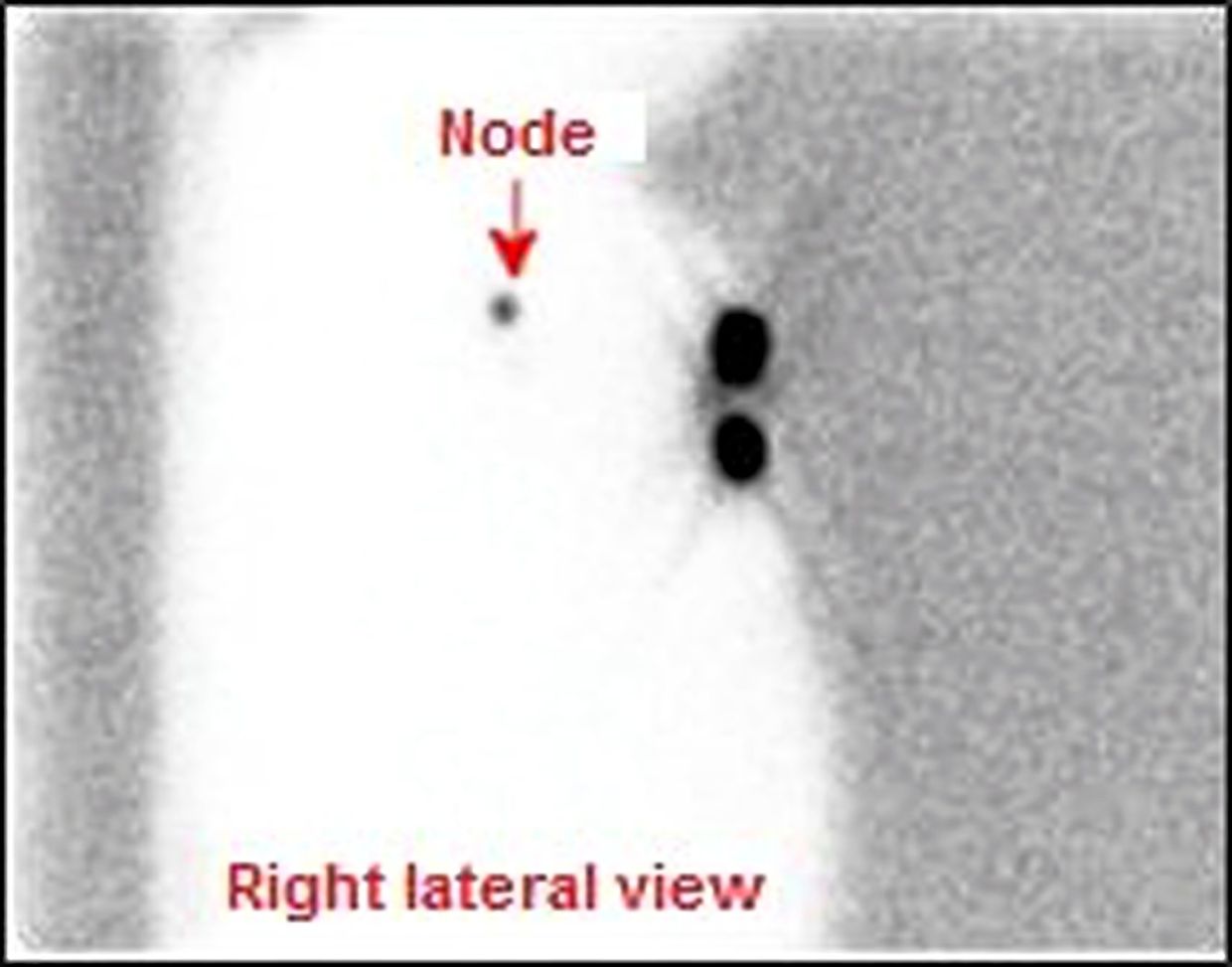 The SLN is identified using lymphoscintigraphy. The two larger black spots indicate where the radiotracer was injected into the breast at the periphery of the tumour.In the past, all patients with breast cancer underwent axillary clearance, also known as axillary lymph node dissection, as part of the surgical treatment.

One of the most undesirable consequences of removing the axillary lymph nodes is swelling of the upper limb of the affected side.

Lymphoedema can insidiously develop over several months or years after the surgery.

However, this is less common nowadays for early breast cancers due to the practice of sentinel lymph node (SLN) biopsy.

The term “sentinel lymph node” refers to the first lymph node(s) that drains from the evaluated site – in this case, the breast tumour.

After the diagnosis of breast cancer by pre-operative biopsy, the patient will be comprehensively evaluated with regards to their axillary lymph node status.

If the mammogram, ultrasound and CT scan show the axillary lymph nodes are normal looking, SLN biopsy is the preferred operation of choice.

But if the axillary lymph node(s) appears abnormal, the patient would then be advised to go for axillary clearance.

During the biopsy, the surgeon basically looks for the SLN and removes it (usually in a group of two to four nodes) for histopathological evaluation (i.e. examination via microscope to see if there are any changes due to disease).

This can be done by either using the blue-dye technique, lymphoscintigraphy or a combination of the two techniques.

In the blue-dye technique, the surgeon injects a blue dye at the periphery of the tumour just below the skin (subdermally) and traces the subsequent flow of the dye to the adjacent lymph nodes.

The node with the most visually intense blue colour is deemed SLN number one.

The other blue-stained nodes are assigned as SLN number two, three and four accordingly.

For lymphoscintigraphy, a very small amount of radiotracer (radio- isotope-labelled nano-albumin) is injected at the periphery of the tumour – similar to the blue-dye technique.

The flow of the radiotracers are then mapped using a gamma-camera.Following the identification of the SLN, the patient would then be brought to the operating theatre to remove that particular node(s).

The “hot” node(s) is identified during surgery by using a special gamma-probe.

Studies have shown that combining the two techniques provides the best outcome in correctly identifying the SLNs.

If the SLNs are found to be negative for cancer spread after the histopathological evaluation, no further axillary surgery is required.

This means that the patient’s recovery is faster and the risk of lymphoedema is minimal.

However, if the SLNs show cancer spread, then axillary clearance is necessary to remove more of the axillary lymph nodes.

Such surgery can be done as a one-stage procedure with the use of frozen section biopsy for immediate analysis of the SLNs during the operation itself.

Alternatively, the axillary clearance can be scheduled one to two weeks after the biopsy.

The expertise is here

Besides staging and evaluation of treatment response, nuclear medicine studies can also be used to evaluate other bodily functions before the start of cancer treatment.

For example, oncologists can use cardiac ventriculography to assess heart function prior to starting treatment as some drugs are known to affect the heart.

For patients with extensive painful bone metastases, radioactive therapy has been shown to be effective in providing bone palliation.

The standard of our Malaysian healthcare has improved significantly over the past few decades and is now on par with those of advanced countries.

However, many Malaysians still seek treatment in other countries due to the perception that the expertise and facilities are better there.

As the saying goes: “The grass is always greener on the other side!”

Many Malaysians might not be aware that our country was a hub for health tourism before the borders closed due to the Covid-19 pandemic.

In fact, there are more nuclear medicine centres in our country now, compared to a decade ago.

The role of nuclear medicine in breast cancer management is undeniable and should be fully utilised for optimal care.

Dr Alex Khoo Cheen Hoe is a consultant nuclear medicine physician and Datuk Dr Cheong Yew Teik is a consultant breast and endocrine surgeon. For more information, email starhealth@thestar.com.my. The information provided is for educational and communication purposes only, and should not be considered as medical advice. The Star does not give any warranty on accuracy, completeness, functionality, usefulness or other assurances as to the content appearing in this article. The Star disclaims all responsibility for any losses, damage to property or personal injury suffered directly or indirectly from reliance on such information.