When your teenager has eating troubles 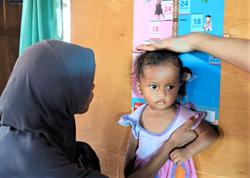 A dissatisfaction with how they look, taken to the extreme, can result in a number of eating disorders in adolescents. — Positive Parenting

Weight obsession affects millions of teenagers all over the world today.

These conditions plague many youth, even here in Malaysia.

In fact, there is a high rate of dissatisfaction among local teens in how they perceive their bodies and body weight.

A common scenario is when one’s body weight is normal, but the teen has excessive fear of becoming overweight, which may result in a disordered eating behaviour.

The Adolescent Nutrition Survey section of the 2017 National Health and Morbidity Survey showed that 17.6% of teens with normal weight and 4% of thin teenagers aged 10 to 17 years old mistakenly perceive their weight as either overweight or obese.

Another local study published in 2018 found a 14% frequency of binge-eating among teens aged 13 to 16 years old.

And a study conducted among Malaysian university students revealed that this went up to as high as 23% among this population.

The exact reasons leading to eating disorders are not yet fully understood, but they are not lifestyle choices.

Research shows that they are caused by a complex interaction of emotional, psychological, social and behavioural factors.

Disordered eating may start with meal-skipping, excessive dieting and binge-eating, which may gradually worsen.

As a result of a distorted body image and/or a preoccupation with controlling their food intake, teens may develop:

There is also “emotional eating”, which has been identified as a possible trigger to binge-eating and bulimia.

However, these preferred foods tend to be unhealthy (e.g. high in fat, sugar and salt) and end up fuelling the eating disorder cycle.

Good nutrition is of great importance during the teen years, as the brain and body need an adequate supply of energy and nutrients to function optimally.

Eating disorders will disrupt the supply of nutrients, and impact cognitive growth, behaviour and academic performance.

This can manifest as poor memory, alertness and attention, or even performing tasks poorly at home or in school.

Teens with these issues may become adept at hiding such behaviours, and it may remain undiscovered by family or friends for a long time.

The signs and symptoms vary depending on the type of eating disorder, but be alert to these red flags:

If you think your teen has an eating disorder, try talking to her first.

Avoid being judgemental or confrontational.

You can schedule a doctor’s appointment so that the healthcare professional can note anything unusual, and give advice on healthy eating habits and exercise routines.

If necessary, your teen may be referred to a psychotherapist who will work together with your child to help him break out of the eating disorder.

It’s important to be able to engage your teen in an open discussion about healthy eating habits and body image.

Remind them that an unhealthy eating pattern actually does more harm to the body and mind.

Be frank about how the media often portrays unhealthy ideal body images, and how this negatively influences teenagers.

We need to constantly reinforce the message that a healthy body weight is preferable to any perceived “perfect” body.

Be careful not to make comments or jokes relating to one’s body type, weight or shape.

Most importantly, never judge your teen based on appearance or physical traits.

Teenagers also need to be educated on the dangers of fad diets, which often focus only on certain nutrients at the expense of others, and are detrimental to proper growth and development.

Encourage them to talk with you or other family members or friends if they need emotional support.

Lastly, be sure to walk the talk.

Telling your teen not to diet, binge or eat based on emotions won’t work if you are doing it yourself.

As a parent, it is important to stay on top of your teen’s mental health and condition.

Pay attention to subtle signs, as teens are often not forthcoming about the problems they face.

Be alert and kind.

Dr Thiyagar Nadarajaw is a consultant paediatrician and adolescent medicine specialist. This article is courtesy of the Malaysian Paediatric Association’s Positive Parenting programme in collaboration with expert partners. For further information, please email starhealth@thestar.com.my. The information provided is for educational and communication purposes only and it should not be construed as personal medical advice. Information published in this article is not intended to replace, supplant or augment a consultation with a health professional regarding the reader’s own medical care. The Star does not give any warranty on accuracy, completeness, functionality, usefulness or other assurances as to the content appearing in this column. The Star disclaims all responsibility for any losses, damage to property or personal injury suffered directly or indirectly from reliance on such information.

Speaking your child's language of love

Don't forget the fat in your child's daily meals - it's essential! Malaysian teens are shorter than the rest Premium
Omicron or Delta, does it matter?
Bracing for the Omicron tsunami
Covid-19: Two more drugs recommended for use by WHO
From pig to man: A groundbreaking moment for heart transplants
Covid-19 vaccination confirmed to have effect on period
Feeling stressed and burnt out? Have a muffin (not)!
Covid-19: Fixing the trachea after intubation for oxygen
Top 10 predicted fitness trends for 2022: Home gyms are in, online classes are out
Drugs for depression are not for all patients