Do take a quick nap to recharge your batteries if you need it, even if it means you have to neglect a chore or two for the day. — Filepic

Sleep deprivation can make anyone feel exhausted, aggressive and irritable, which is especially tough for new parents when their little one doesn’t sleep through the night.

It can be hard for parents not to become angry at their child for robbing them of a good night’s sleep, even if rationally, they know that there’s no malice behind the child’s actions.

It’s important, however, that parents take these feelings of anger seriously and don’t simply push them away or ignore them.

The obvious solution – even if it doesn’t always work out in everyday life – is for sleep-deprived parents to lay down for a quick snooze and recharge their batteries whenever possible.

“Part of that means accepting that not everything is tidied up or the laundry doesn’t get done for the day – such trappings should not be all that important,” says Dana Mundt, who works for Germany’s Federal Conference for Educational Counselling.

Alternatively, parents can consider letting their children stay with their grandparents or a family friend for a night if they’re nearby, or hiring a babysitter for a few hours during the day to get a chance to catch up on some much-needed rest.

If parents are noticing that they’re becoming aggressive, e.g. when the child won’t let them fall asleep again or won’t brush their teeth, that’s a feeling that needs to be taken seriously.

“You are allowed to be angry at your child sometimes, to be annoyed and to communicate it,” says Mundt.

Going outside and taking a deep breath can help parents who are on edge.

In the long term, parents can also try to come up with a solution that might bring them some relief in the situation.

It also helps to find people in the same boat.

“In my experience, it can be very relieving for parents to air their frustrations in a group chat with other parents,” says Mundt.

People who find they’re having trouble controlling their anger around their child or themselves should seek outside help. – dpa

Think your kid is spending too much time playing video games? 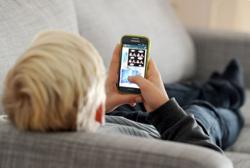 Give your fingers a workout (and we don't mean on the phone!)
Three myths about couples therapy
Are you or someone you know a sociopath?
A centenarian tells the tale of two pandemics
New treatments, including for reversing diabetes, in updated guideline Premium
This procedure is often overlooked when treating arthritis
Urine test for womb cancer in the works
Milo Ups Its Green Game
These dangerous invisible gases might be building up in your home
Should spreading vaccine misinformation be a crime?