Most PET scanners are combined with CT scanners, as in this PET-CT machine, in order to provide hybrid imaging that utilises the best of both types of imaging. — Filepic

Not to be confused with creatures that we keep as pets, the similarly-named PET scan is an imaging modality used in the medical field.

What is a PET scan (or simply PET) and why is it necessary?

PET is the acronym for positron emission tomography, which doctors use to visualise the structures within the body.

This scan is most commonly performed in tandem with computed tomography (CT) for hybrid imaging.

It is a non-invasive, fast, sensitive and comprehensive way to assess patients, particularly those with cancer, to determine the stage of the disease, the site to treat, as well as to evaluate treatment response.

PET imaging uses a low dose of radioactive elements that are tagged to specific tracers (known as radiotracers) that enable doctors to clearly see what needs to be seen.

Unlike conventional CT scans and MRI (magnetic resonance imaging), there are various radiotracers that can be used in PET scans, such as 2-(18F)FDG, Na(18F)F, (68Ga)Ga-PSMA and (68Ga)Ga-DOTATATE.

Once injected into the body, these radiotracers will distribute to specific target sites, e.g. areas of high glucose metabolism when using 2-(18F)FDG.

Therefore, areas of illness or abnormal activity in the body can be easily identified, rather than looking for a needle in a haystack.

In addition to the visualisation of these areas, doctors are able to measure the lesion for future comparison.

This is to determine the metabolism of the tumour to see if it is still viable or active, or to check for any changes in metabolic activity.

(From left) The CT scan (3a), PET scan (3b) and fused PET-CT scan (3c) images of a patient with breast cancer, which shows a metastatic tumour in the left shoulder blade on the PET scan, but not the CT scan. — Photos: Dr ALEX KHOO CHEEN HOE

As previously mentioned, most PET scanners worldwide are also equipped with CT scanners for hybrid imaging.

There are only a handful of PET scanners that also have in-built MRI scanners (none so far in Malaysia) for better visualisation of certain structures like the brain and pelvic organs.

PET scans are usually performed for cancer-related indications such as staging, restaging and assessment of treatment response.

For example, in newly-diagnosed lung cancer cases, it is very important for the oncologist to accurately stage the disease as it would determine whether the patient undergoes curative surgery and chemotherapy, or only palliative chemotherapy.

The use of the 2-(18F)FDG radiotracer in a PET-CT scan helps the oncologist to see if the lung cancer has spread to a particular lymph node(s) of interest.

During treatment, the oncologist may request for another PET-CT scan to be performed in order to evaluate the response of the tumour to the treatment.

If the treatment is effective, the abnormal uptake of the radiotracer will either reduce or disappear.

With all the other advanced imaging modalities like CT scans and MRI, many patients do wonder if it is necessary for them to undergo PET scans.

However, unlike CT scans and MRI, which are focused on structures (anatomy), the PET scan is a unique targeted imaging modality that utilises radiotracers, which can be equated to a target-specific missile.

The most widely-used radiotracer, 2-(18F)FDG, has properties similar to glucose and will seek out cancer cells that have high glucose metabolism.

Therefore, by performing a PET scan with this radiotracer, doctors are not only able to view the site of the cancer, but also to evaluate the metabolism or activity of the tumour.

PET scans also have other uses, such as in the assessment of dementia and seizures, checking the functions of the heart and in the evaluation of unresolved fever.

The use for such non-cancer-related conditions in Malaysia is still relatively low, but with more PET scanners and awareness, the numbers will increase.

There is, without doubt, always the fear of undergoing scans involving radioactive elements.

It is important to understand that the need of the PET scan is usually justified, and the doctors have already considered the risks versus the benefits of the scan for the patient.

Secondly, the amount of radiotracer injected is low and not harmful to the body.

The radiotracers (analogous to colouring) clear rather rapidly from the body with fluid consumption, and decays exponentially on its own.

These radiotracers do not harm the kidneys or remain in the body for long.

PET scans have been used extensively in Europe, the United States, Australia and many parts of Asia, particularly in Japan, South Korea and China.

Even Singapore has a higher ratio of PET scanners to the total population, compared to Malaysia.

There are only 16 PET-CT scanners in Malaysia, with the majority located in the Klang Valley.

However, there are only two PET-CT scanners in public hospitals and another three in public university hospitals.

Data from the latest Malaysian National Cancer Registry Report shows an increase in the number of new cancer cases diagnosed, from 103,507 cases in the previous report to 115,238 cases in this one.

This is likely to be just the tip of the iceberg as the number of patients with cancers, whether diagnosed or undiagnosed, is definitely much higher.

The lack of PET-CT scanners in Malaysia means that many cancer patients are not be able to benefit from this imaging modality.

Many oncologists have to resort to treating their patients based on whatever imaging modality is available and affordable, even though it is suboptimal.

Nonetheless, the importance of a PET-CT scan should not be overlooked.

Earlier detection and accurate staging of cancer not only saves time and money, but also saves lives!

The right decision is the wrong decision if it is made too late.

A PET-CT scanner is definitely an important medical imaging modality in this day and age, and should be fully utilised.

Everyone deserves the best treatment!

Dr Alex Khoo Cheen Hoe is a consultant nuclear medicine physician. For more information, email starhealth@thestar.com.my. The information provided is for educational purposes only and should not be considered as medical advice. The Star does not give any warranty on accuracy, completeness, functionality, usefulness or other assurances as to the content appearing in this column. The Star disclaims all responsibility for any losses, damage to property or personal injury suffered directly or indirectly from reliance on such information. 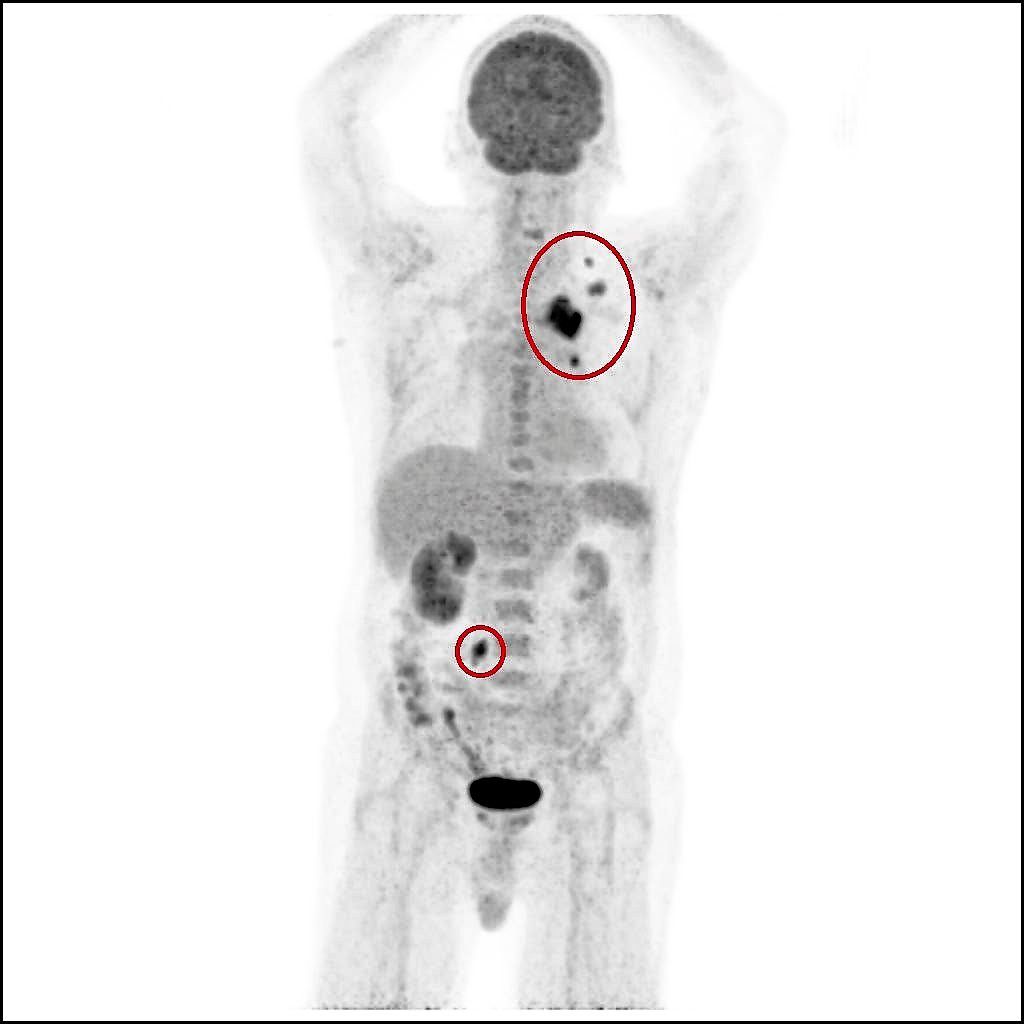 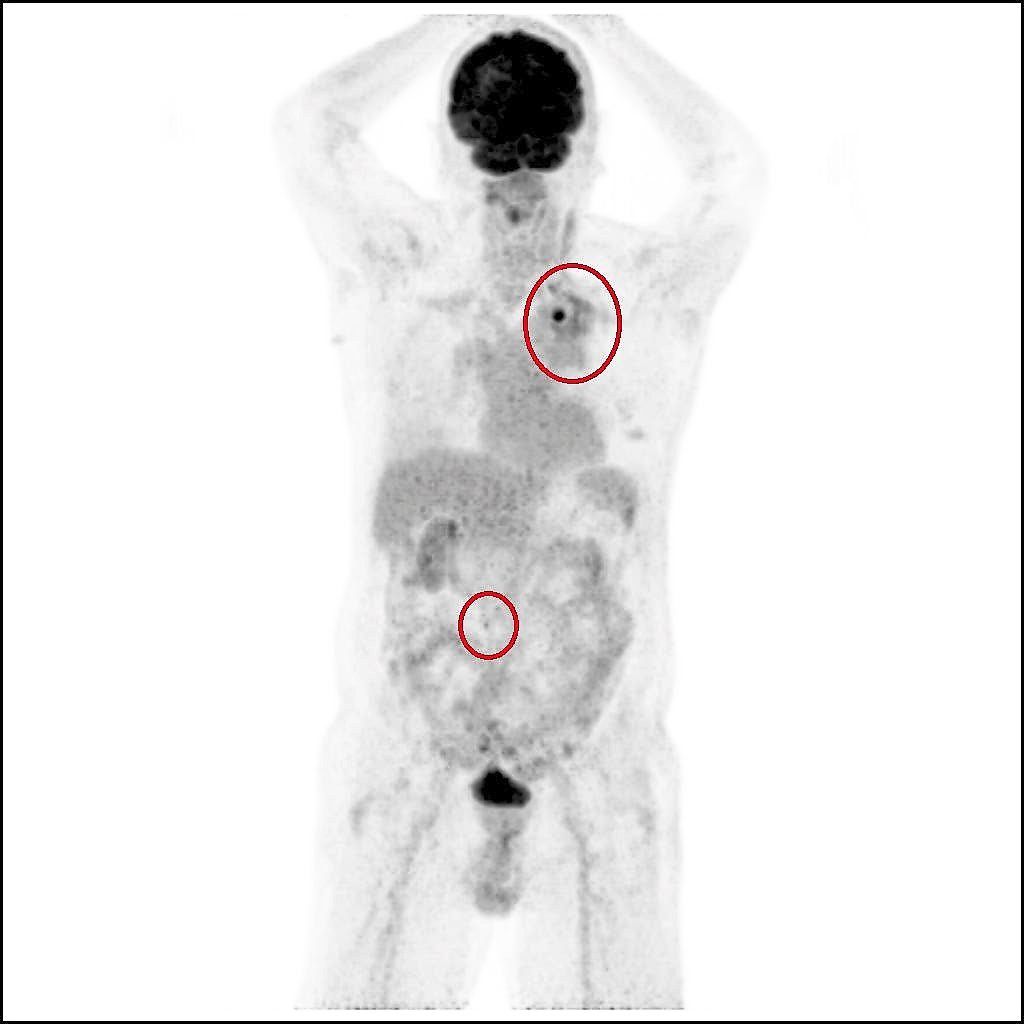 The abnormal distribution of the radiotracer in this PET scan image of a patient with left lung cancer (the dark spots within the red circles) allows easier and faster identification of the cancer. The other dark areas are normal parts of the body and can be easily distinguished by nuclear medicine physicians.

This subsequent PET scan image shows that the abnormal distribution of radiotracer within the larger red circle has reduced, while there is no longer any within the smaller red circle, after the patient has undergone chemotherapy.