Is coffee good or bad for you? If you lead a healthy lifestyle, then drink away!

If you lead a healthy lifestyle, there is no reason why you cannot indulge in a daily cup of coffee, or two. For those with high cholesterol, Dr Liew advises using filtered coffees as paper filters will remove coffee lipid compounds.

A sip of freshly brewed coffee often awakens our senses in the morning.

For general practitioner Dr James Liew, it kept him on his feet for hours.

“I needed coffee to survive my housemanship years but I would then suffer from gastric pains throughout the day, ” he says.

It wasn’t the scent or taste that sparked his fascination with coffee, but a rather uncomfortable gut that drove him to research the drink and led him to gain certification in Coffee Sensory Skills from the Specialty Coffee Association (SCA).

His curiosity started with simple questions regarding the reactions he had with coffee.

“I started experimenting with different dosages to find the optimum amount that would perk me up without the negative side effects, ” he recalls.

According to Dr Liew, up to 400mg of caffeine a day, equivalent to three to four cups of brewed coffee, is a safe level of consumption for most healthy adults.

“It is important to remember that caffeine is not only present in coffee but also in other food and beverages including tea, soft drinks, energy drinks, chocolate and ice cream, ” he says.

Mild, adverse effects of having too much caffeine are palpitations, tremors, agitation and gastrointestinal upset. These are common but will usually pass on their own.

More severe adverse effects, though uncommon, such as arrhythmia, ischemia, seizures and hallucinations, would warrant a visit to the doctor.

Many people also experience side effects after consuming too many energy drinks. 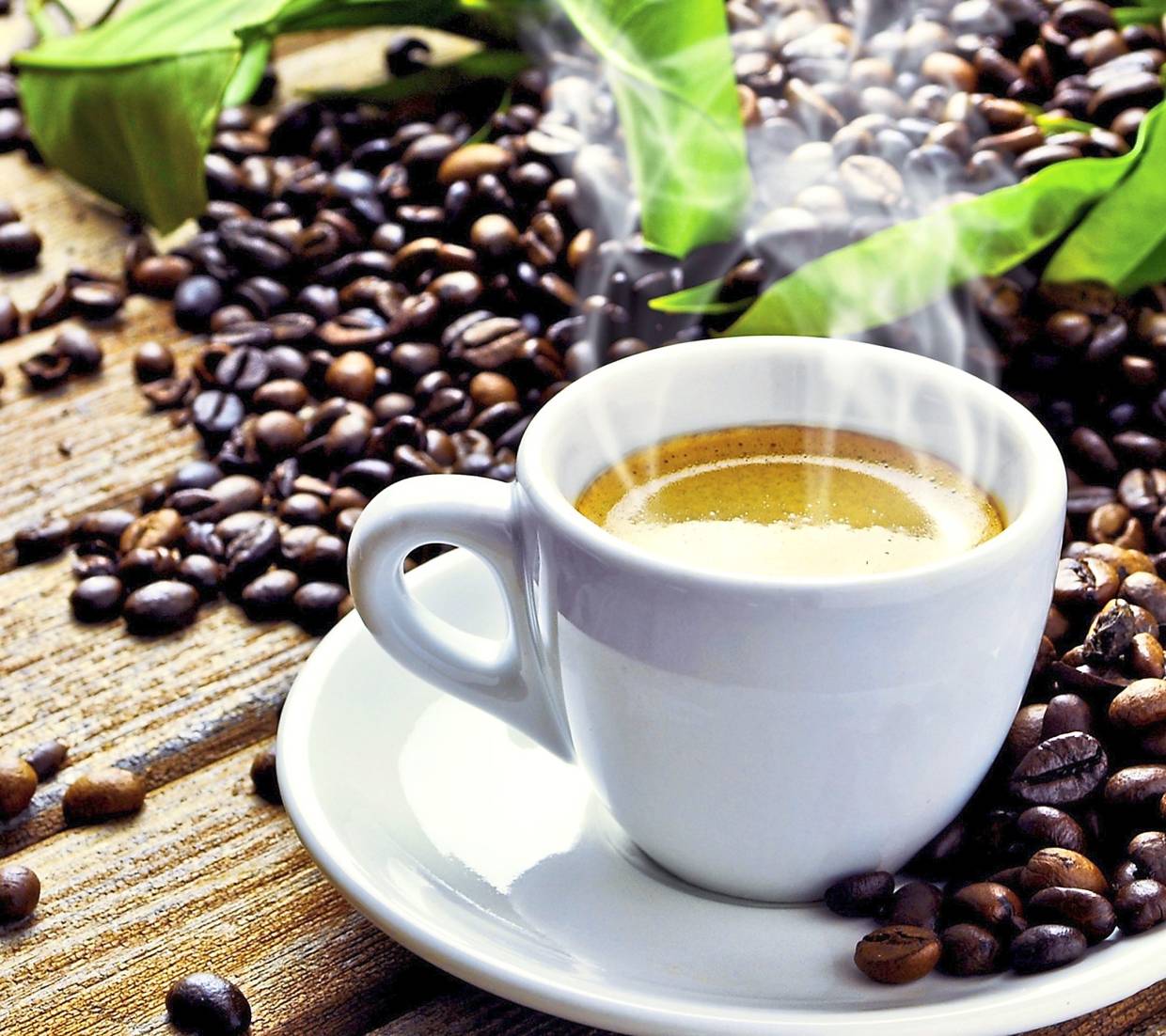 Over-drinking coffee does not constitute addiction or abuse as it does not interfere with a person’s normal life patterns.

“You need to be careful about drinking caffeinated energy drinks in excess, especially if you are mixing them with alcohol, which is considered a suppressant and can mask the signs of caffeine overdose such as palpitations, ” he says.

And yes, there are differences between light and dark roasts.

Dr Liew explains, “Although dark roasts have a stronger taste, they actually have slightly less caffeine than a light roast. The roasting process burns off some of the caffeine.

“It also doesn’t mean that when coffee is more bitter, it has more caffeine.

“An espresso may have less caffeine than another type of brew.”

It’s pretty confusing, so what is to be believed?

“Many of the observational studies had sample sizes that were not big enough to account for other compounding factors, so don’t believe everything you read.

“If you are drinking coffee, there is not enough ‘negative’ evidence to tell you to stop. And, vice versa, there is no reason to convince someone to drink coffee for health benefits, ” he points out.

There was however strong evidence, from randomised controlled trials, of some positive effects of coffee and caffeine.

Sitting on top of the list, and the reason why many reached out for a cuppa every morning, was increased cognitive function.

A 2010 study published in the Cochrane Database of Systematic Reviews, of people suffering from jet lag or shift work disorder found that “caffeine significantly improved their concept formation, reasoning, memory, orientation, attention, perception as well as prevented errors” when compared with groups who were drinking a placebo.

The pick-me-up effect was also sought after to improve athletic performance in sports or at the gym.

“It has been shown to increase endurance but I see a lot of youngsters abusing caffeine for the purpose of fitness. It increases performance, but some overdose by getting into a cycle of drinking coffee followed by energy drinks.

“They then end up at our clinics as they are dehydrated, ” he warns.

Another interesting discovery was the relationship between coffee and gout.

Dr Liew says coffee has been shown to reduce levels of uric acid. This was not due to caffeine however, as decaffeinated coffee led to similar results.

“So it’s not the caffeine but other components in coffee that helps prevent gout, ” he explains.

A key point to note was that these benefits of coffee were related to pure coffee brewed from beans, without additives.

“It is not the same as instant coffee, local coffee and the 3-in-1 mixes, ” Dr Liew says.

“Those have additives such as margarine and sugar. Drinks such as frappuccino usually contain 5% coffee with the rest made up of milk, syrup, sugar and cream.”

It was also believed, with moderate evidence, that coffee has other positive side effects such as helping constipation, improving heart health, reducing incidents of stroke, diabetes and cirrhosis.

The antioxidants in coffee helped to slow down the progression of liver cirrhosis in patients with hepatitis C infection.

Another study found a link between coffee or tea and a decreased risk of Parkinson’s disease although it is still unknown how caffeine might protect against the disease.

On the flipside, coffee has been shown to increase blood pressure in people who are not habitual coffee drinkers. Coffee could also increase cholesterol levels.

“For those who have high cholesterol, choose filtered coffees, rather than those that just use metal sieves, as paper filters will remove coffee lipid compounds. However, more often than not, it is the high fat milk in coffee that is the culprit. If you really have difficulty controlling your cholesterol, try cutting down on the milk, ” says Dr Liew.

“That means if you are not taking much calcium, and you’re taking coffee every day, that risk is much higher. You have to balance it out, ” he says.

People confess to being coffee addicts but Dr Liew says that over drinking coffee does not constitute addiction or abuse as it does not interfere with a person’s normal life patterns. 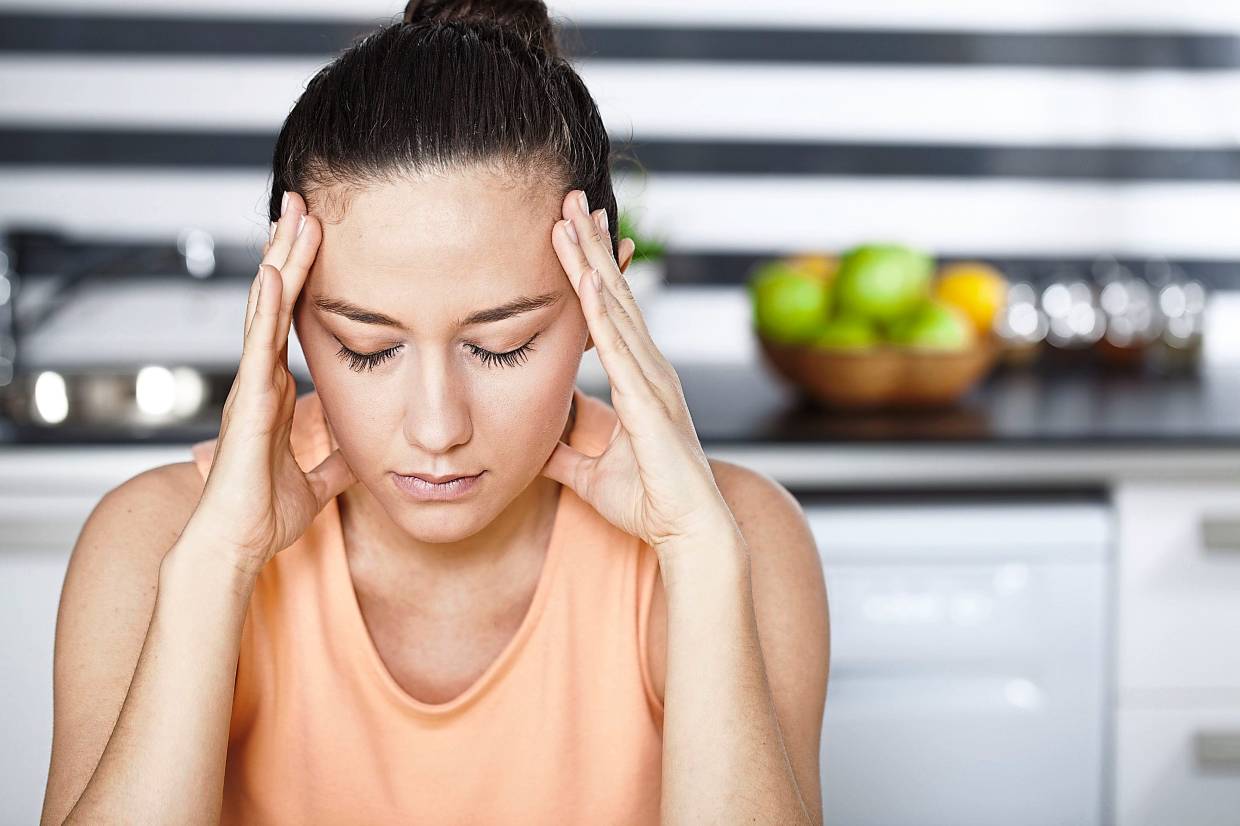 A headache is one of the signs of caffeine-withdrawal symptom. — TNS

“It does not make you give up on your work and studies or shirk your responsibilities.”

On the other hand, the existence of caffeine withdrawal symptoms are well established. Most regular drinkers would be familiar with symptoms such as headaches, tiredness, decreased energy, decreased alertness, drowsiness, decreased well-being, depressed moods, difficulty concentrating, irritability and feeling fuzzy headed. Flu-like symptoms, nausea, and muscle pain have also been reported.

Hence, says Dr Liew, if you need to abstain from coffee, for example, prior to an elective medical procedure – you should do so gradually by reducing your intake over a week to prevent withdrawal symptoms.

Those who love the drink should also take note that they could be unintentionally drinking toxins with their coffee. Mycotoxins are naturally occurring toxins produced by certain moulds (fungi) and can be found in variety of different crops including coffee beans, often under warm and humid conditions.

Mycotoxins can cause acute poisoning to long-term effects such as immune deficiency and cancer.

To avoid this, Dr Liew suggests consumers buy whole fresh coffee beans whenever possible; inspect coffee beans for evidence of mould, and discard any that look mouldy, discoloured, or shrivelled; store coffee in a dry but not too warm place; and do not keep coffee for extended periods of time before being used.

“It’s important to remember that coffee is just one component of our daily lifestyle. If we have a healthy lifestyle and a healthy idea of what we want to eat, then coffee is not going to be a problem.

“Simply put, if you are not drinking coffee, that’s fine and if you are, enjoy it!” says Dr Liew.

This article is courtesy of IMU Healthcare. The information provided is for educational and communication purposes only and it should not be construed as personal medical advice. Information published in this article is not intended to replace, supplant or augment a consultation with a health professional regarding the reader’s own medical care. The Star disclaims all responsibility for any losses, damage to property or personal injury suffered directly or indirectly from reliance on such information.