A shared plate: A look at Asean delicacies 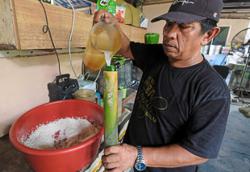 The food ties that bind our vibrant region should be celebrated.

While Asean cuisines − and even Asian cuisines − have been lumped together due to their perceived commonalities, the food of the Asean nations are as diverse as their peoples and languages.

Sharing the same geographical region and climate, we harvest more or less the same bounty from the land and seas that surround our nations. What grows well in one Asean country grows well in the next: rice, coconut, palms, taro, tapioca, sago, ginger, turmeric, tamarind, chilli, mint, coriander, lemongrass, pandanus, durian, mango and the list goes on.

From these same resources, with artful resourcefulness, we have each carved out unique cuisines to both celebrate our differences and similarities.

The cuisines of the Asean countries have drawn worldwide acclaim for their culinary ingenuity and sheer deliciousness. No other region in the world can serve up food so distinctly different yet familiar at the same time.

The influences of the early civilizations to have reached the region − the Arab, Hindu and Chinese − cannot be denied and this has impacted the inner workings of the kitchen, and imprinted a certain predisposition in the stomachs and taste buds of the people.

Their continued presence through trade and settlement in the region in later waves in the last century further cemented their influence on the cuisines of the South China Sea countries.

Across the region, we revel in the use of chillies, spices, noodles, fish sauce and soy products. The common flavours − which can be traced to the Indian and oriental dynasties − tempered with the use of the indigenous produce of the land, such as coconut milk and tropical herbs, have come to define the food of the region as distinct from the cuisines of China, Korea and Japan.

South-East Asian flavours are spicy, sweet, salty, hot and tantalisingly crisp − a happy marriage of polar opposites on the taste spectrum. Our cooking methods are primarily stir-frying, deep-frying, grilling, steaming, and boiling. In the kitchen, the pounding of spices using a granite or wooden mortar and pestle reverberates through the region. 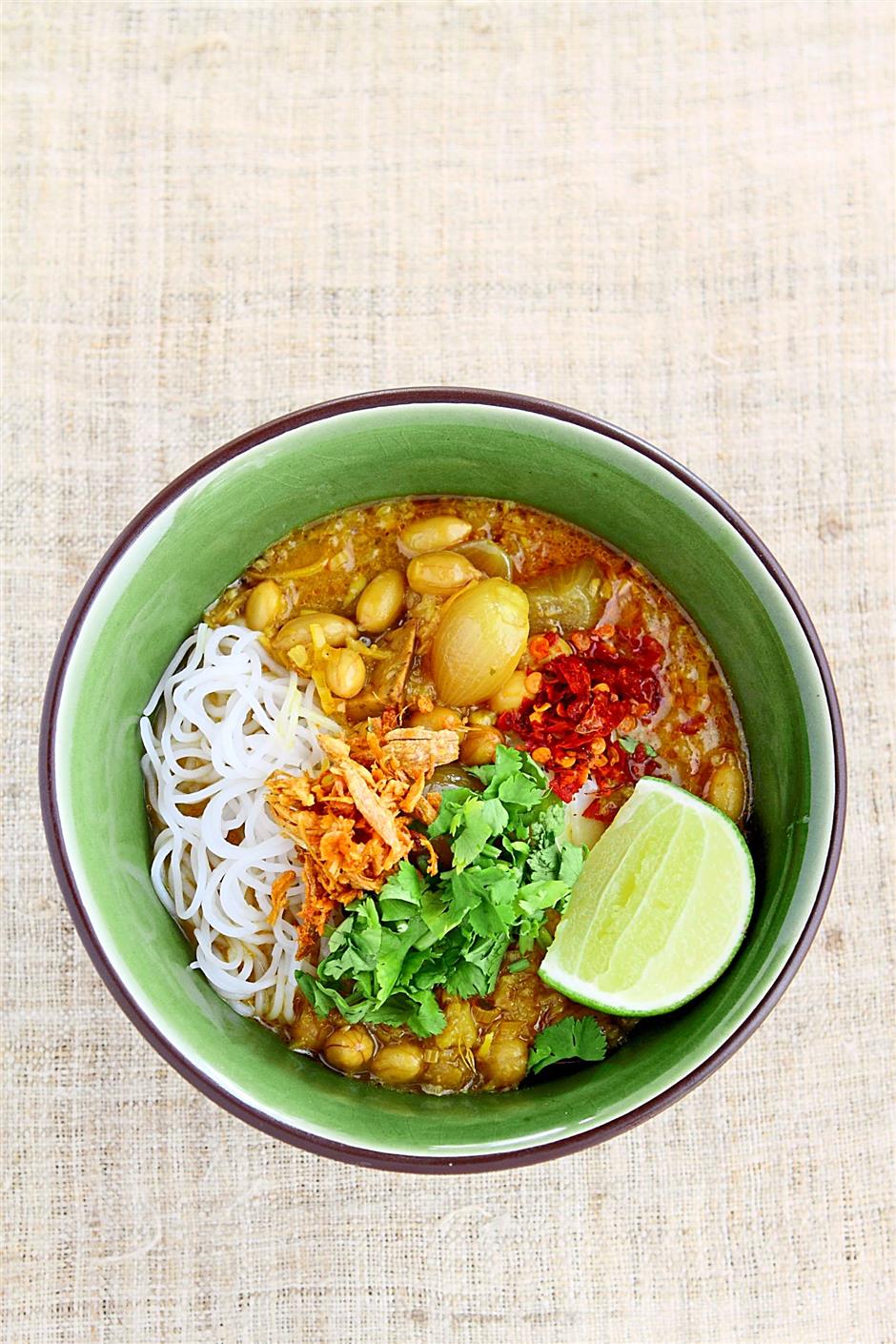 Piquant noodles in fish sauce from Myanmar.
These methods yield dishes that are intensely flavourful, such as green mango salad and Vietnamese Pho.

Another important similarity between South-East Asian food is the use of a pungent, fermented, fishy condiment such as shrimp paste, fish sauce, Laotian padaek or the Filipino bagoong to add a bold intrepidness that leaves a distinct savoury aftertaste.

A scent of the rainforest

Herbs and spices are integral to South-East Asian cooking, with many of the most widely used sourced from the tropical rainforest. Old faithfuls like lemongrass, pandan leaves, wild ginger flower, galangal and cloves can be discovered in any South-East Asian cook’s larder. Galangal is a central ingredient in the famous Cambodian dish Amok Trey, a curry-flavoured steamed fish cooked with coconut milk. Lemongrass and wild ginger flower are added to Malaysian and Singaporean laksas and curries, while cloves are native to Indonesia and liberally used in their cuisine.

Coconut milk and coconuts are also key flavours in many dishes. It is the base of many desserts, such as Myanmar’s Moh Let Saung, a refreshing drink of coconut milk, sago and palm sugar. 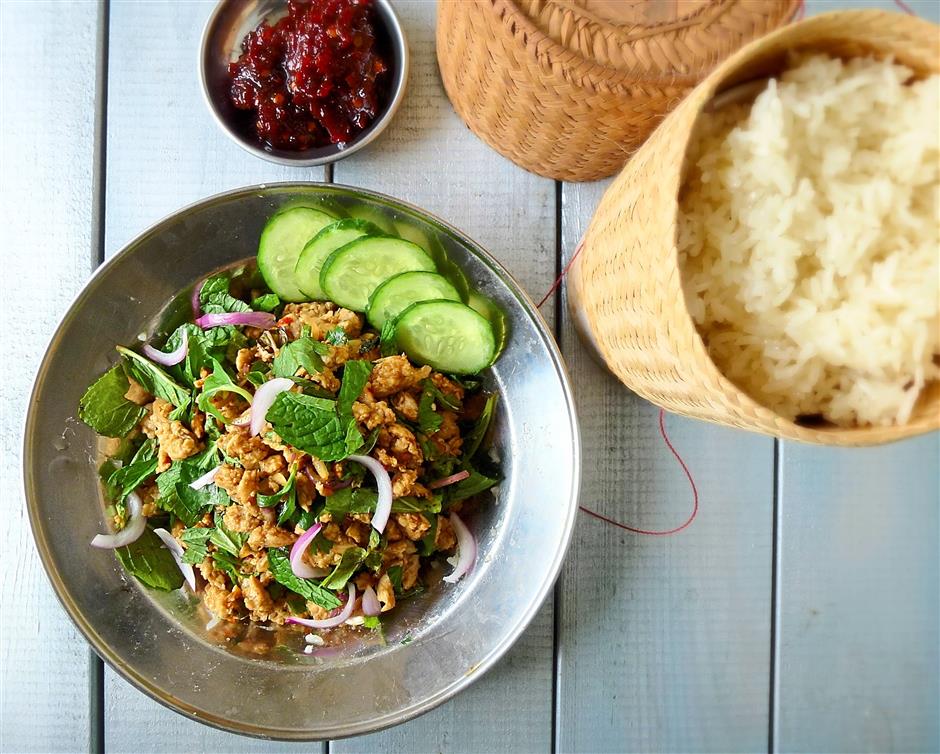 Laotian Chicken Larb.
Coconut milk is an indispensable ingredient in the region’s curries, good for thickening and lending a creamy and silky mouth feel, complementing the taste of curries without overpowering them.

Rice is not just a main ingredient but defines the South-East Asian − and Asian − food ways. Dishes cooked are centred around rice, a main energy source.

In this part of the world, we favour long grain rice like the subtly scented Jasmine, and Basmati as well as glutinous rice. Singapore considers a rice dish, Hainanese Chicken Rice, as its de facto national dish. Thai Pandan Chicken
Lao cuisine makes abundant use of glutinous rice, and it is an important part of the turmeric-flavoured Nasi Tumpeng, one of Indonesia’s national dishes.

The rice cake Bibingkang Malagkit from the Philippines is a sweet dish made of glutinous rice and coconut milk, perfect for afternoon tea or a light snack.

If there’s one thing Asean cooks like to do, it’s wrapping their food up in a variety of leaves. We may use banana, palm, wild pepper and pandan leaves for this purpose.

Brunei’s Pais is a popular marinated meat dish that is grilled or baked in banana leaves. Ketupat, indigenous to the Malay archipelago, is rice intricately wrapped in palm leaves and then boiled. Thai Pandan Chicken is deep fried pouches of pandan leaves filled with chunks of chicken. 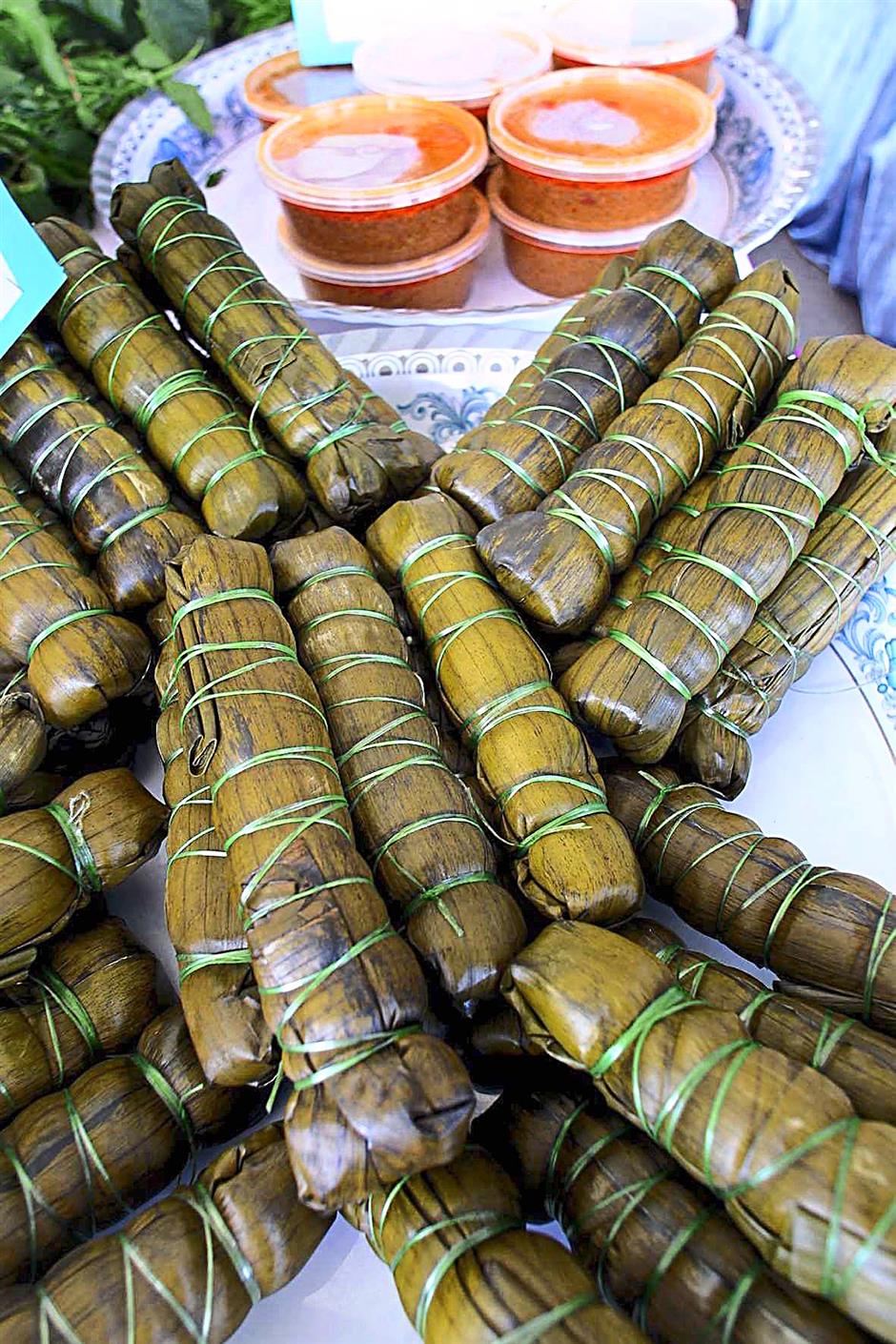 Wrapping and cooking our food in leaves is an inspired cooking method that reflects the resourcefulness of the people in using readily available leaves.

Steaming, boiling, frying or grilling food in leaves allows the aromatic fragrance of the leaves to infuse the food, subtly enhancing the food’s flavour without interfering with its inherent taste.

Leaves also offer a protective covering, helping the food cooked to remain in shape and to keep it moist. It is even used as a plate liner, or the plate itself, as in Banana Leaf Rice.

Ultimately, Asean is a truly delectable melting pot of delicious cuisines and dynamic people. While separated by borders, languages and culture, we are united by our food heritage, with the differences in our cuisines serving only to underscore our diversity. If food is central to identity, it’s not a stretch to say that South-East Asian cuisine, in all its glorious abundance, is a major part of our collective identity as a region.

And that identity is audacious, bright, full of verve and zest, and always spicy.