Craft cheeses are catching on

Golden wonder: Cheesemakers (from left) Sam Kennedy and Matt Hettlinger standing among the cheese in one of the storage areas at The Farm at Doe Run in Coatesville, Philadelphia.

Cheese is going the way of the craft beer movement: People are learning how to make it in small batches while taking advantage of local ingredients and terroir.

AS with regional brews, demand for regionally-made cheese is on the rise. Matt Hettlinger can attest to this. He is a cheesemaker, working for the past two years at The Farm at Doe Run in Coatesville, Philadelphia, about 40 miles west of Philadelphia. On a table dressed in burlap, several cheeses on plates accompany caramelised red onions, candied nuts and glasses filled with Pennsylvania beers.

The chef-turned-cheesemaker talks with his wife, Yvonne, and visitors as they sample cheeses made on the lower level of this converted barn, where three stone caves have been outfitted as ageing rooms.

In the tasting area, giant windows look out on a stunning backdrop of rolling hills, stone farmhouses and wide-mouthed barns. Cows, goats and sheep graze in the distance.

Adjacent to the space is a windowed, white-tiled milking room. Twice a day, animals are herded inside to a lowered platform surrounded by top-of-the-line equipment from Holland.

The Farm at Doe Run isn’t just any farm. It’s the 700-acre estate bought in 2008 by Richard Hayne, founder and CEO of Urban Outfitters. Hettlinger and Samuel Kennedy are the guys he has hired to put his brand of Pennsylvania cheeses on the map. Cheesemaking in progress at The Farm.


Although cheese has shaped foodways around the world for centuries, Americans didn’t really develop a taste for homemade varieties until the 1990s.

From 1994 to 2003, cheese making grew by 75 percent, led by artisans in Wisconsin, New England and California. Farmstead cheese, which uses milk only from animals on site, in particular is on the rise.

In Pennsylvania, the cheese renaissance is more recent, with many cheesemakers learning their craft over the past couple of years.

He says the state is rapidly catching up with New York and Wisconsin in artisan cheese production. Cheddar, Gouda, Colby, Monterey Jack and Havarti are the most popular cheeses made in Pennsylvania. Local cheesemakers add flavours and spices to make them distinct from more common cheeses.

According to the American Cheese Society, 63% of artisan cheesemakers use cow’s milk and 56% use goat’s milk. A smaller portion, 17%, use sheep’s milk and 20% report making cheeses with mixed milks.

Raw milk cheese is also becoming popular. It requires a licence and inspection protocols before it can be sold, and any cheeses made from unpasteurised milk must be cured for a period of 60 days at a temperature not less than 35 degrees.

To stir demand and gain credibility beyond state borders, cheesemakers compete in American Cheese Society competitions and for Good Food Awards, given annually by a collaboration of food producers, farmers, food journalists and independent grocers. At a cheese society conference in July in Sacramento, Calif., judges will determine the best American cheeses from more than 1,700 submissions.

Hettlinger and his wife, Yvonne, live on the farm, while Kennedy and his spouse, Stacey Gentile, live nearby. All of them work on the estate.

Kennedy was hired in January and brings to the table previous cheese making experience and a food science background. Since he started, The Farm at Doe Run has introduced several new cheeses that they’re hoping will win awards in the coming months.

Hettlinger and Kennedy fit the profile of many new cheesemakers. They’re farmers or restaurant folks getting into cheese because of its growing popularity and potential profit; their cheeses retail between US$18 and US$27 (RM58-RM87) a pound (450g).

Out in the field, kid goats born weeks ago get their legs as they stray from their mothers to play and graze. What cows eat is of particular importance as spring grasses, rye and clover imparts flavour to the milk.

On a typical day, Hettlinger and Kennedy start work at 7:30am. An employee pumps milk from 35 cows, 75 goats and 50 sheep. Then they “pool” the milk, or heat it to a specific temperature. A starter is added that converts lactose to lactic acid, which equalises the milk’s pH. Then rennet is added. These enzymes produced in a cow, goat or sheep’s stomach react with the milk to form curds. Fine curds produce firm, tight cheeses, while large ones produce soft cheeses. After the milk sets for 45 minutes, makers cut and drain the whey. 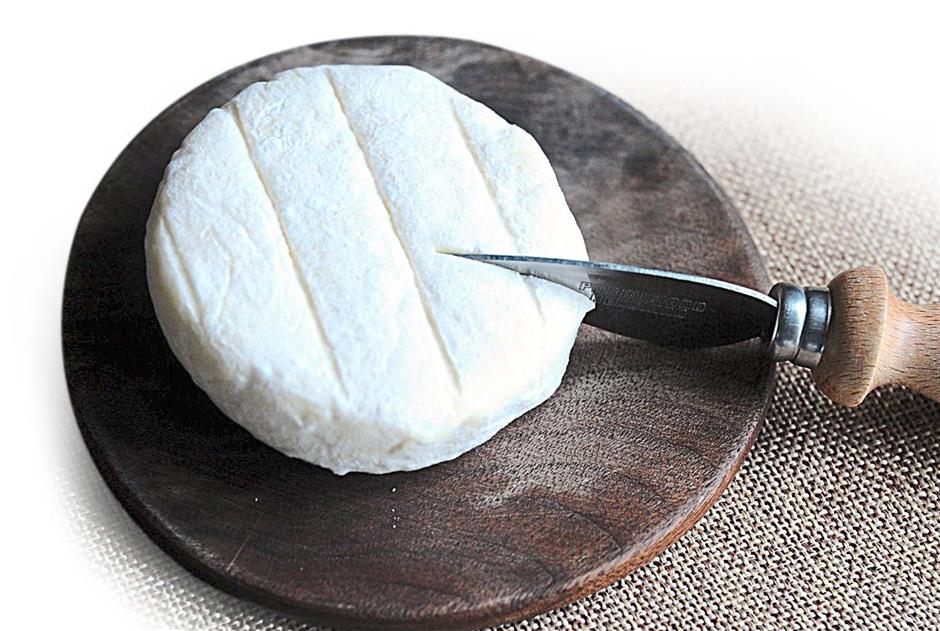 Dragonfly is a white-rind cheese.


Finally, the curds are piled on top of each other, cut and pressed, then piled again in an effort to get rid of remaining whey. Some cheeses require reheating, which results in malleable strings that can be moulded.

Curds are then salted in a brine. During this process, the cheesemakers must check and flip rounds often. After brining, the cheeses go to one of three caves to age.

Visitors to the caves must tuck their hair in a hat and wear bags around shoes to prevent contamination from microbes not already growing in the caves. A stray bacteria left unchecked can infect and ruin cheese.

The first cave, which smells bright and grassy, is for mild cheeses that sat in brine 48 to 72 hours. The rows upon rows of cheese wheels will sit on pine boards for six months to two years.

In the second room, visitors are met with the smell of mould, wet stone and the faint funk of Gouda-style cheeses. These are occasionally washed with a vinegar solution to prevent rogue microbes from contaminating the product.

The third cave is the funkiest and most humid. A pungent aroma from washed and bloomy rinds blankets the air. Here, fewer rounds sit on wire shelves for a week to two months. They’re the most sensitive cheeses of the three rooms.

In addition to adhering to safety precautions and sanitary practices, there are two rules for making cheese, rules that apply to any artisan food production.

“One, you have to pay attention,” says Hettlinger, pointing to a dry corner of the cave, an indication that conditions aren’t quite right.

“And two, you have to adjust accordingly.”

For the tasting, Hettlinger and Kennedy display a handful of cheeses, most of which are sold to select restaurants and shops from Philadelphia to Pittsburgh.

One cheese they can’t keep in stock is Barn Owl, made from cow’s milk. A big, luscious cheese that’s aged for more than a year, it’s so creamy and complex it inspires contemplation. Next to it are two types of cheeses labeled Robiola-style Hummingbirds. In the spring and summer, they’re made with milk from cows and sheep. The rest of the year, it’s cow’s milk only. One small round is mild; the other is layered with black trumpet mushrooms for a hint of umami. The Farm at Doe Run in Coatesville, Philadelphia, United States, produces many varieties of cheese. — MCT


Near the back is Dragonfly, a lively combination of cow’s milk and goat’s milk that’s tangy and grassy. It’s followed by Hop Devil, a cow’s milk cheese with an assertive flavour. The rind is washed with Pennsylvania’s Victory beer of the same name.

The most popular cheese at the farm is the cow’s milk Seven Sisters cheese and the Seven Sisters reserve. Both are named for the original seven cows on the farm and speak to the Dutch-inspired variations they’re producing. The latter is aged more than a year, which results in rich caramel notes.

“We like to name our cheeses after inspiration from the land,” says Hettlinger. “It’s a reminder that cheeses reflect the character of a place.” — Pittsburgh Post-Gazette/McClatchy-Tribune Information Services