From good to Grant

People and ingredients from around the world serve as chef Grant MacPherson’s greatest inspirations.

GRANT MacPherson has cooked for some of the world’s most famous personalities including Princess Diana, George W Bush, Nelson Mandela, Eric Clapton, Tom Cruise, David Bowie, Julia Roberts, Morgan Freeman and Bob Geldof. Yet the celebrated Las Vegas-based chef remains humble, grounded and approachable, resolute in his mission to rustle up a decent meal for any diner who crosses his path.

“I respect all my customers regardless of who they are or what’s their stature,” says MacPherson. “Personally I find it unacceptable that a vegan or any diner with food allergies or special dietary needs should be forced to forgo a good dish and settle for blander, unimaginative options during special lunch or dinner events.

“If I’m informed ahead of time, I will prepare a substitute dish that’s on par with what’s originally intended for the other diners. As a professional chef, my duty is to ensure the food we served is cooked using our best efforts and the freshest ingredients available. Anything less would be unacceptable.”

As the first celebrity master chef to kick off the gastronomic showcase for Resorts World Genting’s 48th Anniversary celebrations, MacPherson is no stranger to Malaysia.

“I first came to Malaysia 23 years ago,” he reveals. “Although I had worked in Vancouver, London, Toronto and Sydney prior to that, this novice chef had no idea where Malaysia was at that time. I simply packed my bags and left Australia to be part of the pioneer opening team for the Regent Kuala Lumpur (now Grand Millennium) in 1989.” 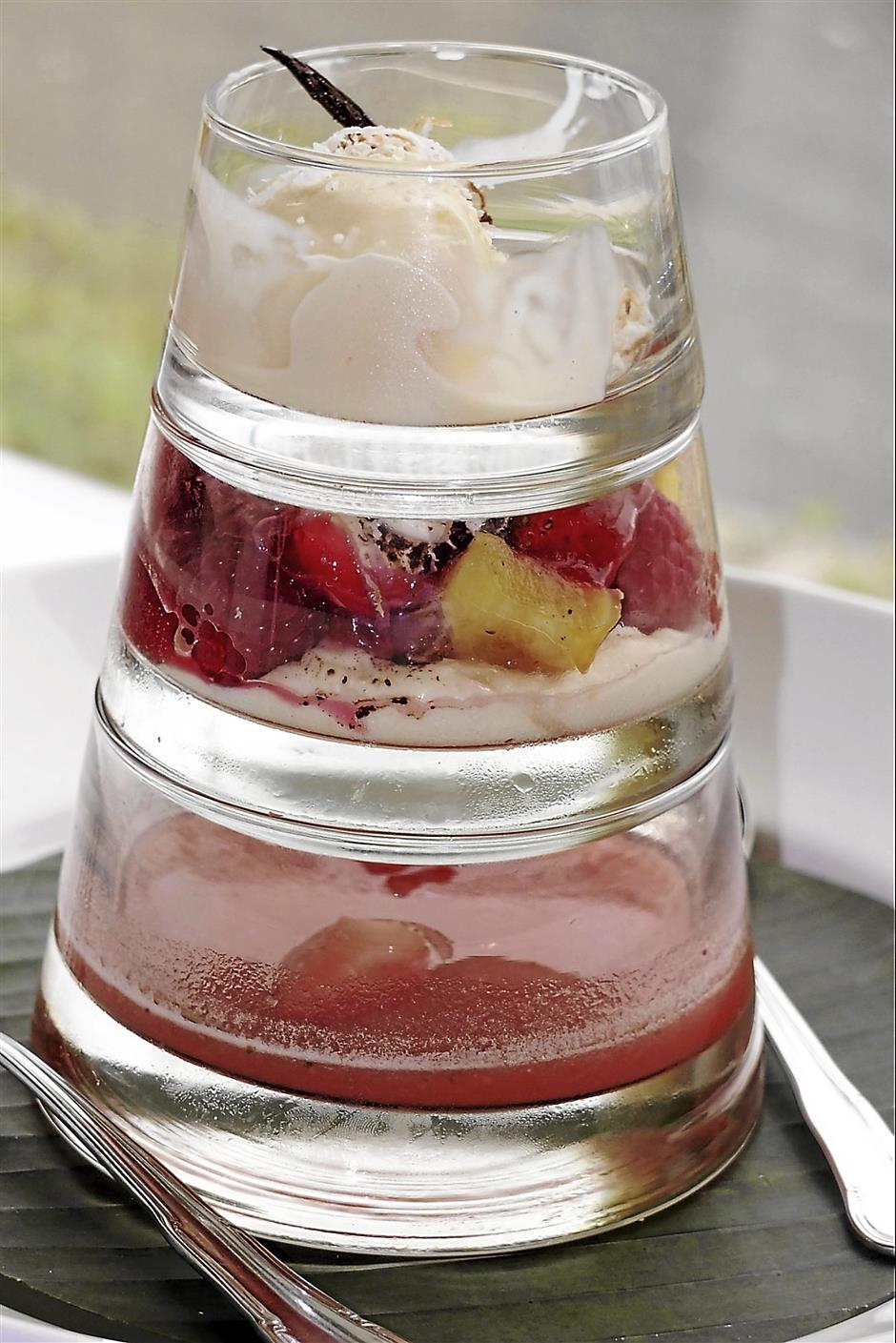 Sarawak pineapple trifle with coconut vanilla cream and red berries, made by chef Grant MacPherson, who is the first celebrity master chef to kick off the gastronomic showcase for Resorts World Genting’s 48th Anniversary celebrations.

A year later, he left for Hawaii but the indelible memory of our char kway teow, rojak and mee goreng remains with him until today. Lamenting on how much he misses Penang’s street food, MacPherson recalls serving satay at a party he catered for Eric Clapton at Madison Square Garden in New York. “The guests had no inkling about South-east Asian food but they loved the delicious taste of satay.”

MacPherson has worked on five continents, eight world-class tourist destinations and hundreds of restaurants throughout his illustrious 23-year career. He was part of the opening team for the Wynn Resorts in Las Vegas and Macau, and the Bellagio Hotel and Casino Las Vegas. Other memorable stints include being executive chef of the Viking Range Corporation in Mississippi, culinary director of Sandy Lane Hotel in Barbados, executive chef of Raffles Hotel Singapore (1996-1998) and The Datai Langkawi (1995-1996). Today, MacPherson is owner-cum-chef of his own consultancy firm, Scotch Myst Inc, in Las Vegas.

When pressed for details on unusual requests and dietary quirks of the famous people he has cooked for, MacPherson told us diplomatically that “the stars and famous luminaries whom I’ve met are nice people. Most of them have very simple tastes. Sometimes it’s the people surrounding the celebrities or VIPs who are difficult to deal with, making unreasonable demands on their behalf.”

Not one to be caught unprepared, MacPherson says he likes to find out as much as possible about the people whom he will be cooking for, whether they are celebrities or ordinary Joes.

The chef also explores the local markets to see, taste and understand what’s available or in season. “It’s important to respect the local culture and I’d always incorporate as many local ingredients as possible into my menus. This way I know I’m cooking with the freshest and best-quality produce.”

Putting money where his mouth is, MacPherson included local flower crabs, Sarawak pineapple and highland-grown vegetables into the seven-course dinner menu he created for The Olive.

The much lauded chef also likes to give diners insights into some of the best places he has been to, illustrated through the choice ingredients he uses.

“My cooking style can be defined as honest, simple cooking that’s globally inspired. I find constant inspiration from the people I meet and also from locally grown ingredients. I enjoy working with local chefs wherever I go; it’s exciting to exchange ideas and learn from each other.”

His forays to different parts of the world have even been compiled into a coffee-table book entitled Word of Mouth. Published last year, MacPherson says “it’s an autobiographical recipe book that records my culinary journey as a chef, a compilation of wonderful food experiences, amusing anecdotes and interesting people whom I’ve interacted with and befriended throughout my career.”

The coming months will see the chef having his hands full, spearheading the opening of a fusion restaurant in St Petersburg, Russia, developing a new hotel in Beverly Hills, California, and completing two book projects. Thanks to his insatiable appetite for fresh challenges, Grant MacPherson is definitely on a roll.

Please go to www.thestar.com.my/lifestyle/food to take a short online poll on your favourite Asian and International cuisines.