Unique culinary culture of the Peranakan Chinese of Malaysia

On a sunny Thursday afternoon, three friends sit down together for a meal. Interestingly, it is the sole male among the three who has done all the cooking.

“It took me three days to prepare all this food,” exclaims David Neo, a senior lecturer at the faculty of film, theatre and animation at Universiti Teknologi Mara (UiTM).

His friends are in awe and conversation flows as plates are piled with food. “Ooh, what is this?” asks the cheerful Dr Lee Su Kim, author of the popular Kebaya Tales and the founding president of the Peranakan Baba Nyonya Association KL & Selangor.

“It’s called bakwan goreng and it’s a meatball with some spices in it,” says Neo, poking the plump rotund balls he has carefully fried up.

The three laugh merrily and turn their attentions to eating. Although none are related, they share a common bond: they are all Peranakan Chinese.

History of the Peranakan Chinese

Of these, the Peranakan Chinese in the Straits Settlements (Penang, Melaka and Singapore) are the ones that most people are likely to be familiar with. In Melaka, this community typically speaks Baba Malay while in Penang, Hokkien is the language of conversation. 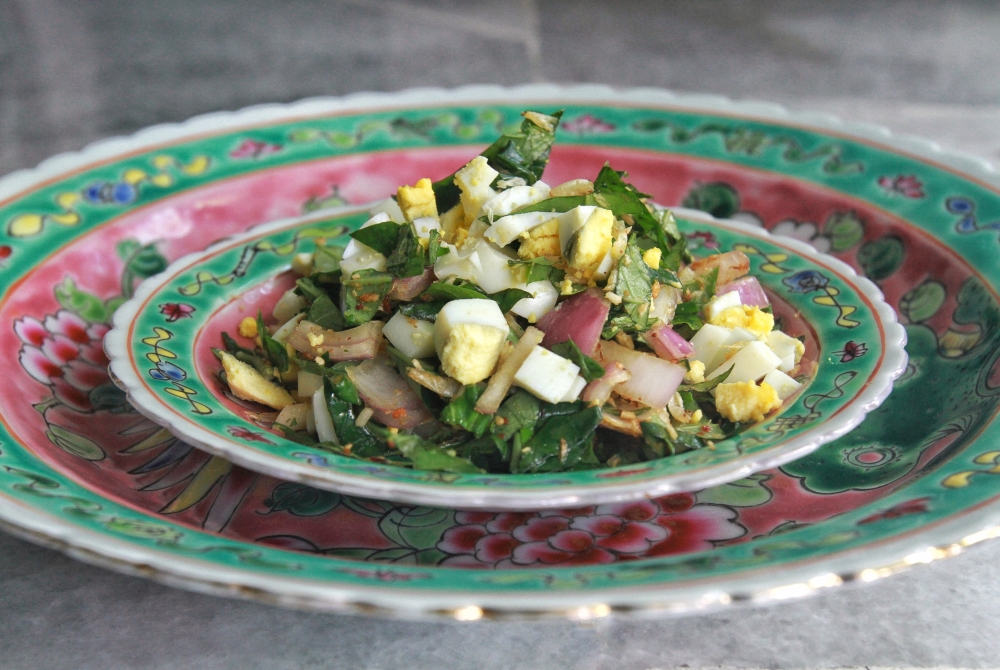 Kerabu daun kadok is a dish that Neo altered slightly as the original recipe calls for daun pegaga. 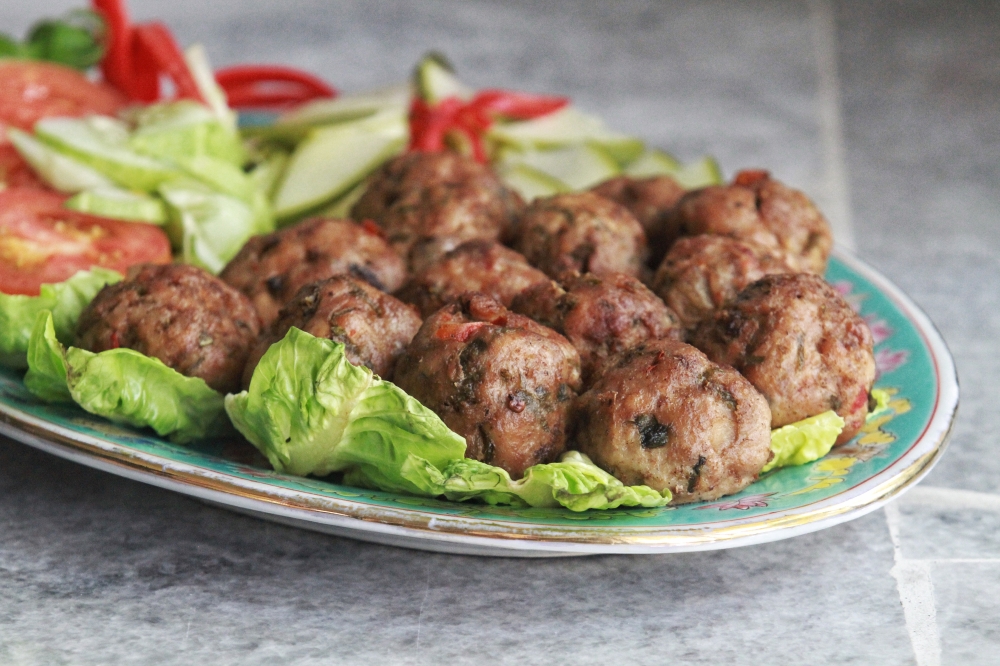 Bakwan goreng is from Neo's family's heirloom arsenal and consists of fried meatballs with an array of spices.

Peranakan Chinese can trace their ancestry back to the 13th century when Chinese merchants travelled to Malaysia and ended up marrying local women and settling in different parts of Malaysia.

The women they married themselves came from multiple places – Batok, Java, Sulawesi, Thailand and Bali. This intermingling resulted in a unique cultural identity that has – to a certain extent – prevailed to this day.

The word “Peranakan” itself literally translates to “child of the land”, but within the Peranakan Chinese community, men are called Babas and women are called Nyonyas, although there is some contention in this regard as the word Baba is typically limited to male descendants who have been here for generations, as opposed to families whose lineage traces back to late 19th and 20th century Chinese immigrants, termed singkehs.

“These days, there are very few families where both parents are Peranakans, as many have married outside the community. After the war, a lot of the Peranakan families were letting their daughters marry the singkehs because they showed potential. So with time, the culture is getting more watered down because it’s just one side of the family that’s represented,” says Neo, who is a descendant of the famed Tan Tock Seng (who founded the Tan Tock Seng hospital in Singapore). 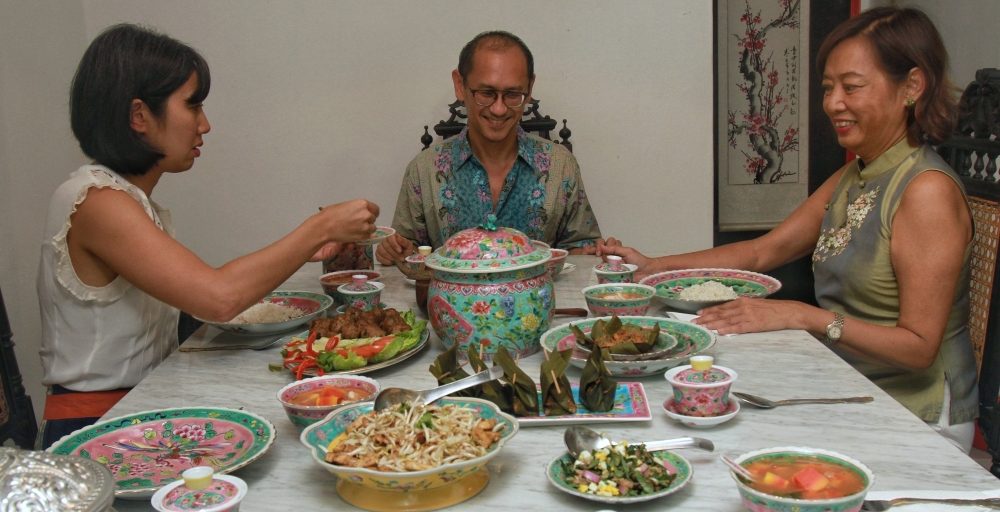 Chan, Neo and Lee: There's definitely loss of culinary identity in modern Peranakan Chinese, but evolution is key to sustaining the community's culture.

Back in the day, the Peranakan Chinese culinary identity was forged based on the Nyonyas, the matriarchs of the homes.

“The food culture is a very rich culture and it’s all deeply family guarded secrets. So different families will have different versions and it’s really families distinguishing themselves, especially the prominent families. In fact, if you find similarities between your food and another Peranakan Chinese family’s recipes, you might actually be related!” says Neo.

As Peranakan Chinese food is notoriously laborious and time-consuming, in the past, the work was often made easier because women from different branches of the family would come together to cook for weddings, banquets and family events.

While the Peranakan Chinese have a litany of dishes for different occasions, one of the occasions that necessitates cooking up a storm is the practice of ancestral worship or sembahyang abu.

“Ancestral worship is very central to the culture, so depending on who they venerate in the family, if it is grandma, then they will do a sembahyang abu on her birthday, death day and Chinese New Year,” says Neo.

The dishes served for these ancestral homage typically take the form of the forebears’ favourite meals and are presented in multiples of four, with up to eight or 12 dishes laid out for the prayers.

Aside from ancestral worship, there is also the concept of tok panjang, or long table meals which involve elaborate festive meals with dishes like pork pongtey and pork with buah keluak arranged on a long table for Chinese New Year, weddings or other festive occasions.

“The whole idea of the tok panjang is to have a spread on the table,” agrees Neo. 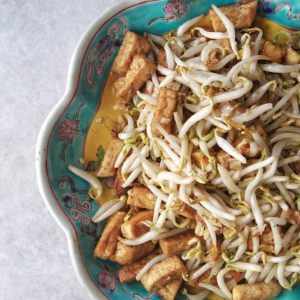 Taugeh masak ikan masin: Many Peranakan Chinese recipes have not been passed down the generations as modern Nyonya women do not have time to produce labour-intensive dishes.

Over time, Peranakan Chinese women have evolved, with many pursuing careers. While this is in tandem with a more global phenomenon, it has also resulted in the loss of many of the heirloom recipes that were typically passed down through the generations. “I eat some of this food at my aunty’s place because she cooks it. But none of my aunty’s daughters cook so I think the recipes will probably not get passed down,” says Chan.

“So it’s a double-sided kind of thing, the more independent the Nyonyas became, the less time they spent in the kitchen. In my grandmother’s time and mother’s time, they were always in the kitchen, celebrated all the festivals and did all the rituals. But few people do that now,” says Lee.

As a result, most people now get their first taste of Peranakan food from local restaurants purportedly serving the cuisine. Unfortunately, Neo says many of the recipes found in modern Nyonya restaurants bear no resemblance to the authentic Peranakan Chinese food he grew up with.

“There is so much that is being diluted and bastardised that when you go to a Peranakan restaurant, half of the menu is not Peranakan at all,” he says, as Lim shakes her head in disgust and mutters “Imposters!”

Still, some stalwarts – like Neo and his friends continue to champion the food and cook their heirloom recipes.

Neo, for instance inherited many recipes from his grandmother like his treasured buah paya masak titek, a light, aromatic soup enhanced with wedges of papaya that he continues to make to this day. “I think it’s not common because even though I’ve seen it in cookbooks, I’ve never had it in anyone’s home or seen it in a restaurant,” he says. 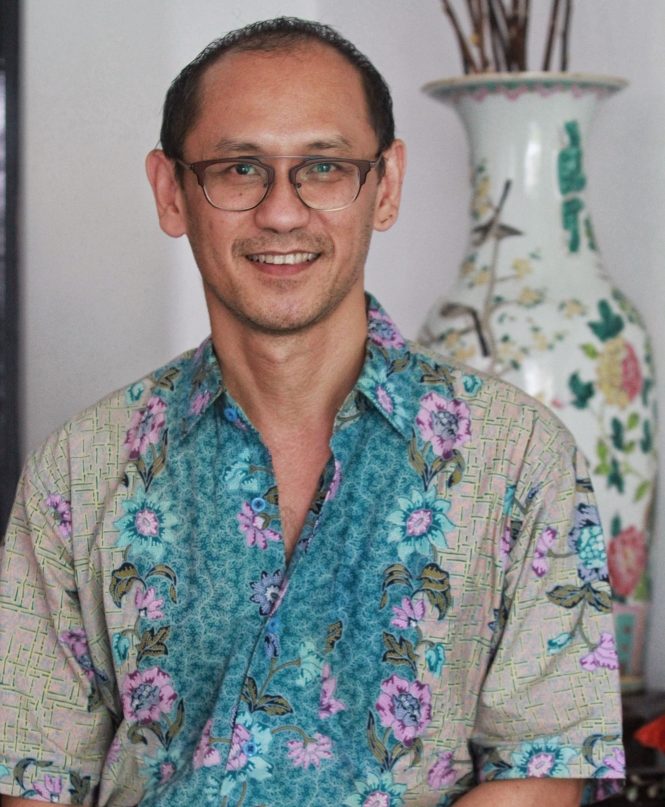 Neo: Most Peranakan restaurants don't serve anything close to the authentic Peranakan Chinese fare he grew up with.

Then there is blotok, a spice-laden concoction similar to otak-otak except that it makes use of fish, prawns and squid.

Meatballs laced with an assortment of spices form the backbone of the corpulent fried bakwan goreng – probably one of the most addictive things to emerge out of the Peranakan Chinese kitchen, if Neo’s version is anything to go by.

Neo says many of these dishes require back-breaking labour, including making everything from scratch, which is why most Peranakan Chinese have turned their backs on the cuisine altogether.

While Neo, Chan and Lee all believe that the Peranakan Chinese culinary identity is under threat, they are also pragmatic about the future.

“I think the younger generation should know about the culinary traditions but also how they are going to take that on – it would not be the same as the past because we have to constantly evolve,” says Chan.

Lee says this might mean really having to adapt with the times in more drastic ways, foregoing traditional ways of doing things in favour of updating recipes according to modern needs.

“There might be a day when you need a cookbook that shows people how to cook Peranakan food using shortcuts like pressure cookers and microwaves. I mean, we have to maintain some criteria but we cannot be sticklers about everything,” she says. 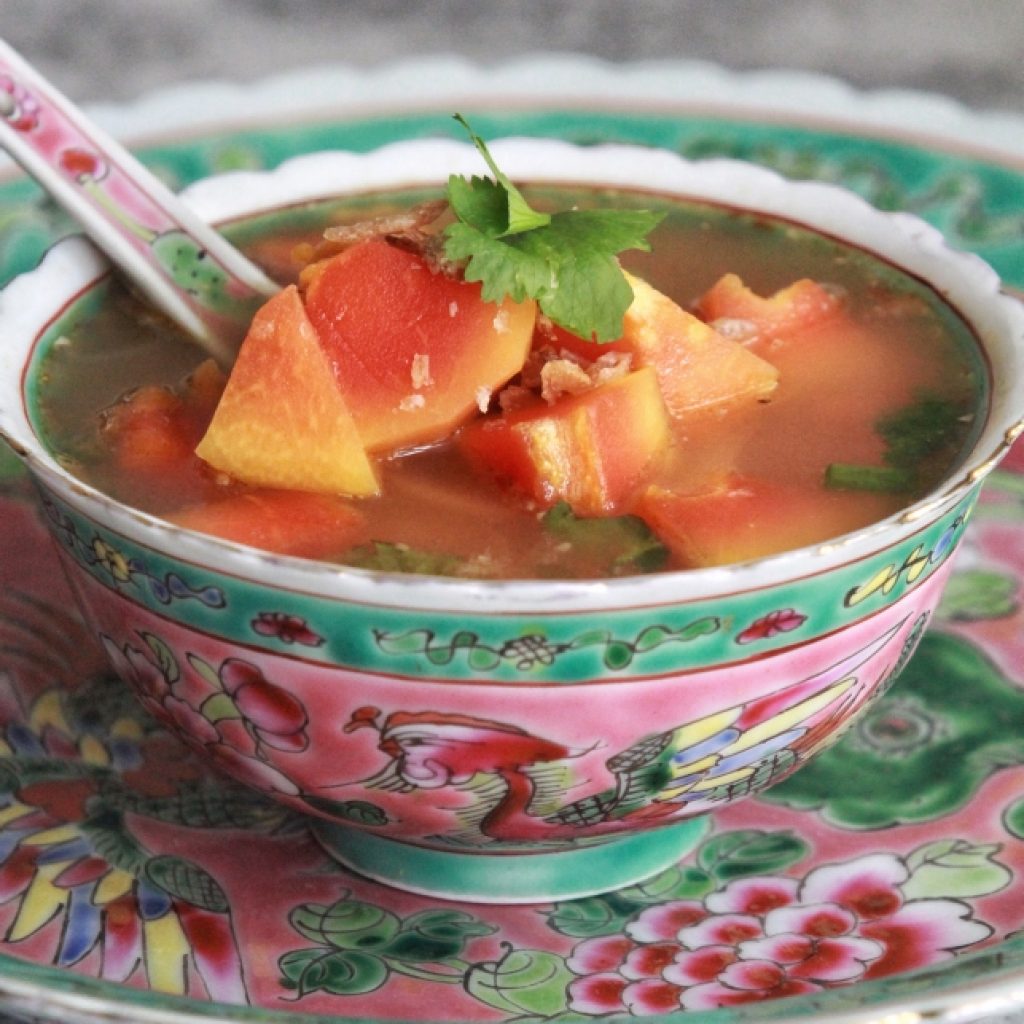 Pound/grind all the ingredients for the rempah into a fine paste. Set aside.

In a pot, fry salted fish untill it is fragrant. Add prawn stock and bring to boil. Add the rempah and stir for awhile. Add prawns, and lastly add papaya. Do not overcook papaya. Serve hot. 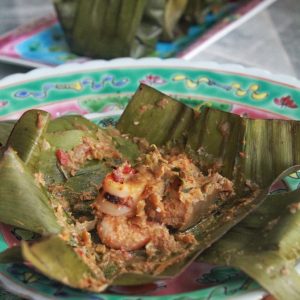 Pound/grind all the ingredients for the rempah into a fine paste.

Combine all ingredients (except banana leaves) together and mix well. Spoon about 2 tablespoons of mixture onto each banana leave and fold into a boat, bringing the fours ends in, and secure with a toothpick. Steam for half an hour. Eat hot.

Unique culinary culture of the Peranakan Chinese of Malaysia