Everything you've wanted to know about Filipino food

Lillian’s Filipino-style tamale is a brilliant piece of art studded with the orange of salted duck egg yolk contrasting with a white custard made of rice flour and coconut milk. Photo: penang-traveltips.com/Timothy Tye

Manila, a food destination? Even Filipinos make fun of their own food as “brown, oily and ugly”. But you’ve heard the rumblings about the Filipino food revolution, even though you may have brushed it aside as fake news.

On a recent 15-hour food crawl from Manila to Pampanga – the Manila Bay hinterland region known as the culinary capital of the Philippines, and also home to our host for the day, chef Sau del Rosario – we were looking for confirmation of amazing Filipino food. The media trip was a prelude to the World Street Food Congress slated for late May.

We learnt quickly that Filipino food is not for the faint of heart or weight watchers. The full-on flavours hit you at the same time as that caffeine in the morning. Breakfast was a nose to tail affair – yes, breakfast. Ready or not, the Philippines awaits in its full gustatory glory.

It’s almost surreal – 8am and you are looking at a buffet of crispy fried guts, skin, liposuctioned pig’s parts, unidentifiable bits and other mysterious bobs at Bulaluhan Sa Espana. A tray of five-storey-high cuts of belly pork has the skin glistening with a soy sauce glaze. Just looking makes your cholesterol level hit the roof. 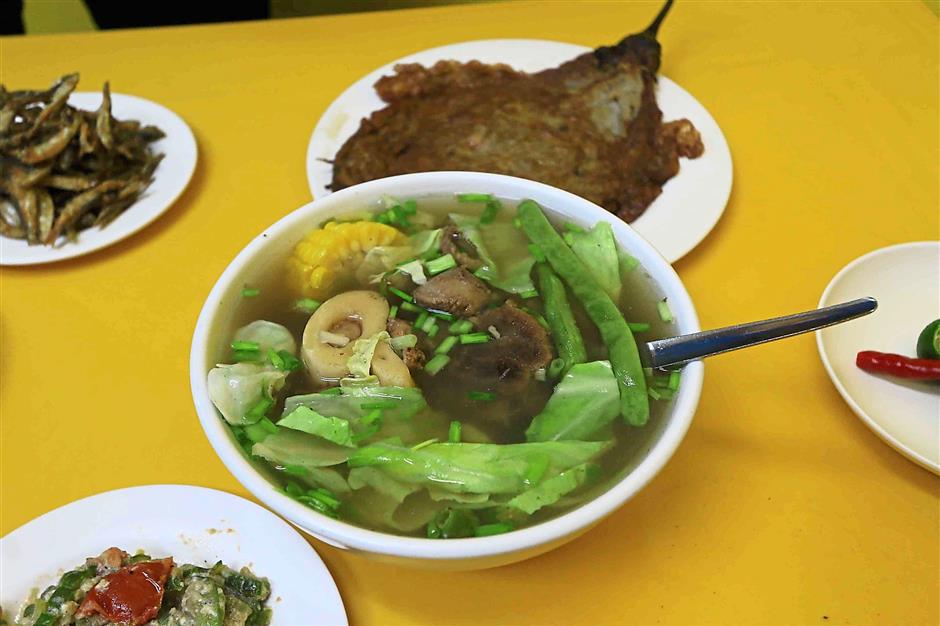 In a corner, KF Seetoh, creator of the WSFC and MakanSutra, is seen rubbing his hands together gleefully; he must be thinking, let’s see what you guys are made of.

Not about to lose face, we suck the bloody marrow out of the bones bobbing in the bowl of bulalo placed in front of us and snack on chicharon bulaklak – pig intestine boiled and fried to a crisp – and balat ng manok, fried chicken skin, dipped in calamansi lime juice, chilli and salt. 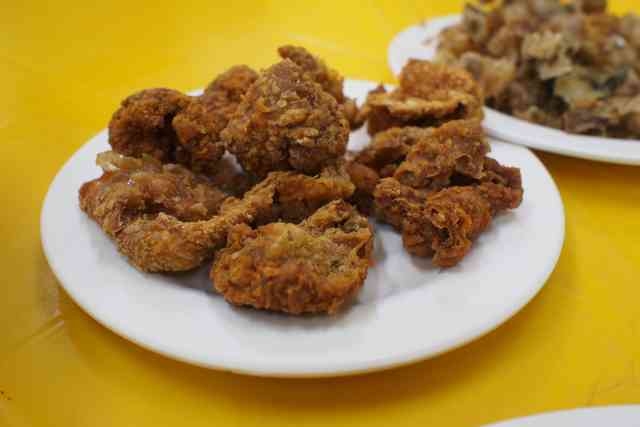 Chicharon bulaklak, or crispy fritters of pig's intestine, is a popular beer snack in the Philippines - and they are really quite addictive.

At its core, bulalo is a simple cattleman’s stew, tossed into a large cauldron with corncobs, onions and vegetables. In that way it’s quite similar to the Mexican beef stew, caldo de res, not entirely surprising given the over 250 years of trade that occurred between the two countries while under Spanish rule.

Bulaluhan Sa Espana is on Espana Boulevard (+ 632 781 7353), a favourite canteen for taxi and truck drivers, students and workers of metro Manila.

Two hours on the bus later, we are at Atching Lillian’s Kitchen in Mexico – the best place to experience the local Pampanga cuisine, Kapampangan. Her reputation as a purist and tough defender of tradition precedes the Filipino Julia Child.

The kitchen where she holds court is next to her ancestral home in provincial Barangay Parian (or Parian village). It is a living museum filled with heirloom cooking implements, every piece a repository of history, carrying with them the imprint of years of cooking, etched in vanilla and spices. 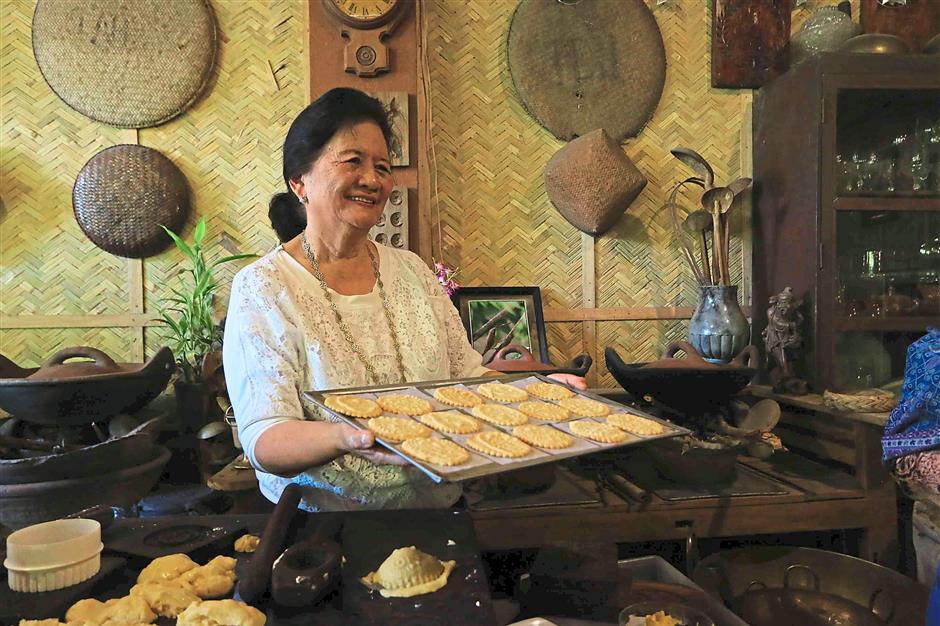 Atching Lillian with a tray of Sanikulas, a cookie paying tribute to the patron saint of bakers, St Nicholas. Photo: Penang traveltips.com/Timothy Tye

Lillian Borromeo is the kind of woman who does not merely enter a room, but makes an entrance, in a beautiful white lace blouse, carrying about her a proud elegance and the air of la dona, mistress of the hacienda.

There is something of the hacienda lifestyle here. The houses are between pre-Hispanic bahay kubo nipah huts and Spanish mansions. Perhaps it is in the rich patina of wood on tables that have seen better days, the faded and tarnished gleam of brass and copperware, the lace tablecloth or the portraits of proud ancestors still presiding over the feasting that goes on each time the bus brings in a fresh load of tourists and foodies eager to taste the family’s soul food.

Most moulds are shallow except for one resembling a deep angku mould that belies its Chinese origins â€“ a St Nicholas cookie made in this mould would have a sweet filling.

In the past, families with means commissioned their own St Nicholas cookie moulds, so you could tell who made the cookies. On the left is a mould with the patron saint design and on the right, a harp-shaped mould.

The story is told of how churches and abodes were cemented together using egg whites and the surfeit of yolks turned into rich and unctuous cakes and cookies. Borromeo charms the crowd with her usual routine, almost dancing as she gracefully rolls the dough from the “middle up ... middle down” to make sanikulas, a cookie paying tribute to the patron saint of bakers, each piece stamped with a carved wooden mould.

“You can’t say you have been to Pampanga if you haven’t tried sanikulas,” Borromeo coos.

A pile of preloved moulds – heirlooms really – lay on the table; in the past, families with means commissioned their own moulds, so you could tell who made the cookies. Most moulds are shallow except for one resembling a deep angku mould that belies its Chinese origins – a St Nicholas cookie made in this mould would have a filling of sweet bean paste. 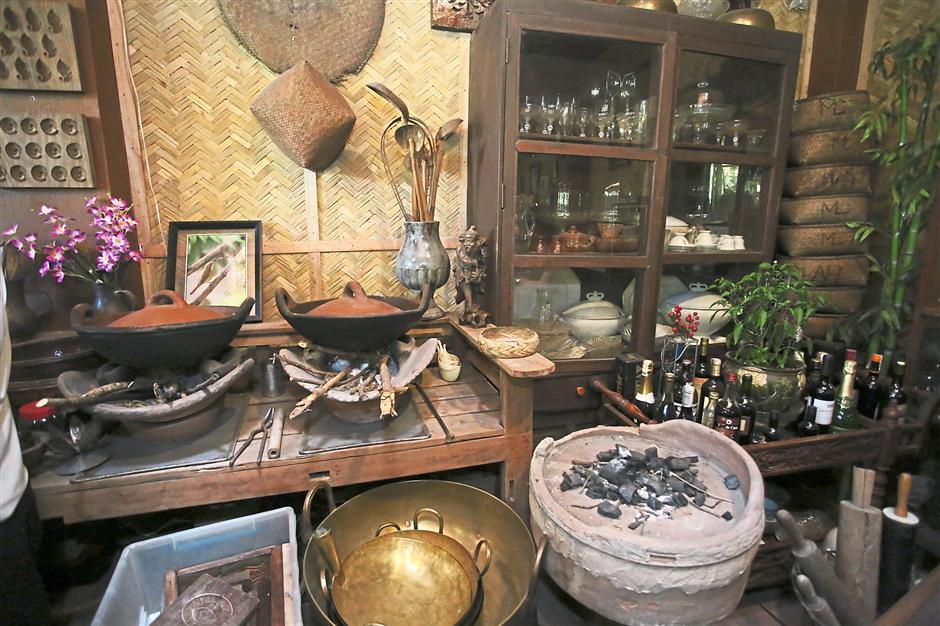 Atching Lillian's kitchen is a living museum – a treasure trove of original cooking implements from the colonial era.

Borromeo is proud to say that her version of this well-loved Filipino pastry is made with at least 30 egg yolks and uses lard instead of butter.

As we are here in Mexico (hola!), a tamale is on the menu. The most fascinating and memorable dish for me, Borromeo’s Filipino-style tamale is a brilliant piece of art studded with the orange of salted duck egg yolk contrasting with a white custard made of rice flour and coconut milk. There is chicken hidden somewhere in the steamed parcel too, wrapped in what must be 20 layers of banana leaf. I contemplated sneaking a second piece into my bag to be enjoyed later but thought better of it.

The origins of Filipino food, you can now guess, is a mélange of the Spanish, Chinese, American and local indigenous flavours, a perplexing galaxy of influences. In the south of the archipelago you also have the Malay and Indian influences. 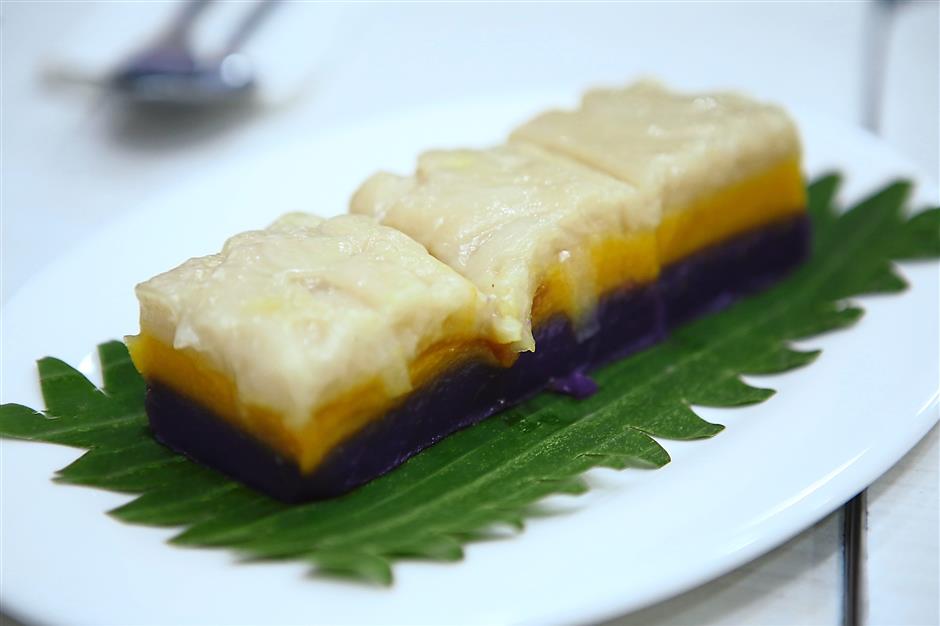 Sapin sapin, a multi-layered sweetcake (kakanin) made with nangka and ube at Suzie’s Cuisine in Pampanga. Photo: Makansutra

You’ll find the most confounding combos on a plate, like oxtail and corncobs (buntot sa mais) and seafood kare kare that has every sea creature in it (including a shipwreck or two) and a curry sauce thickened with peanut butter. It’s not surprising the cuisine is easily misunderstood.

A definition eludes even chefs. “Don’t ask me to define Filipino food, I really don’t know how to,” laments Del Rosario, clearly vexed.

“I’ve been here for some time now, to unearth one of the greatest food cultures,” says Seetoh, “and I’m still just scratching the surface; I’ve given up counting the number of dishes that I have found here. Every region that I go to, I find distinctive food.”

“Every town has patron saints and the people cook up a lot of dishes during celebrations of the patron saints,” explains Sau.

After hardly an hour’s ride, we are in Angeles City, at Norma Garcia’s open-air Taldawa restaurant (+63 906 542 4279) specialising in goat stews. At this point, you realise that this is a country of many stews. 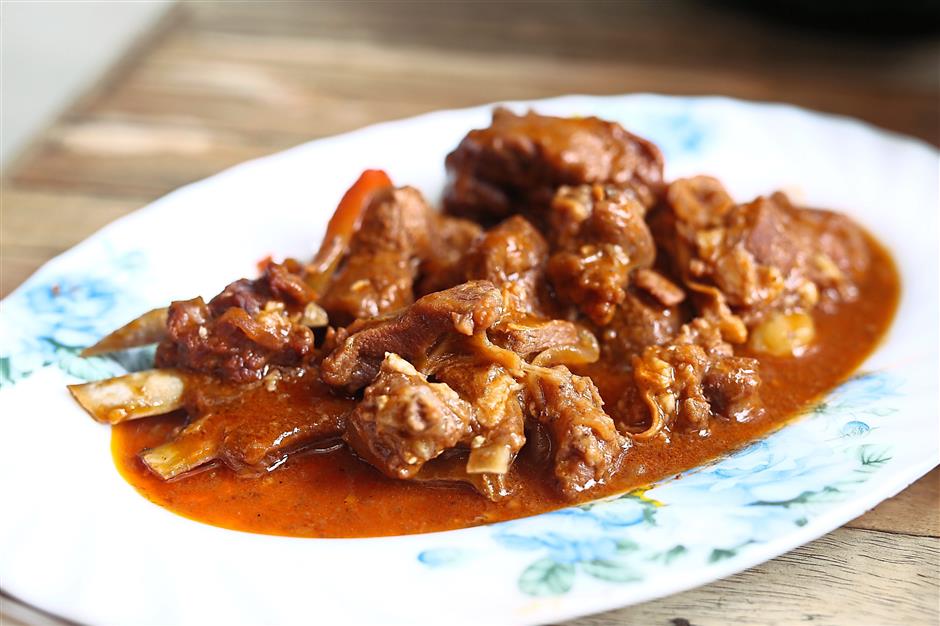 Kalderetang kambing is goat meat stewed in a slightly spicy tomato sauce. The key to cooking it is in the preparation. To remove the gamey taste, goat meat has to be marinated in vinegar with salt and pepper for a good hour or two.

Sinigang na kambing is goat meat in sour broth. And tamarind is used as the souring agent in sinigang.

Adobong bibi is duck adobo, a popular cooking technique in the Philippines using vinegar, soy sauce and garlic. Each household has their own version of adobo and preferred meat to use. For Taldawa, it’s duck.

While Borromeo represents the traditional and authentic aspects of Filipino cuisine, Del Rosario represents the new. With family in the United States, he has worked and lived there as well as in Paris, but has returned to the Philippines where his roots are and opened 25 Seeds in his hometown of Angeles City in Pampanga.

“The Philippines was colonised for 333 years by the Spanish; my grandmother, who is Spanish, tells me only about two things – food and her ex-lovers!” says Del Rosario in explaining the importance of passing on culinary food ways. 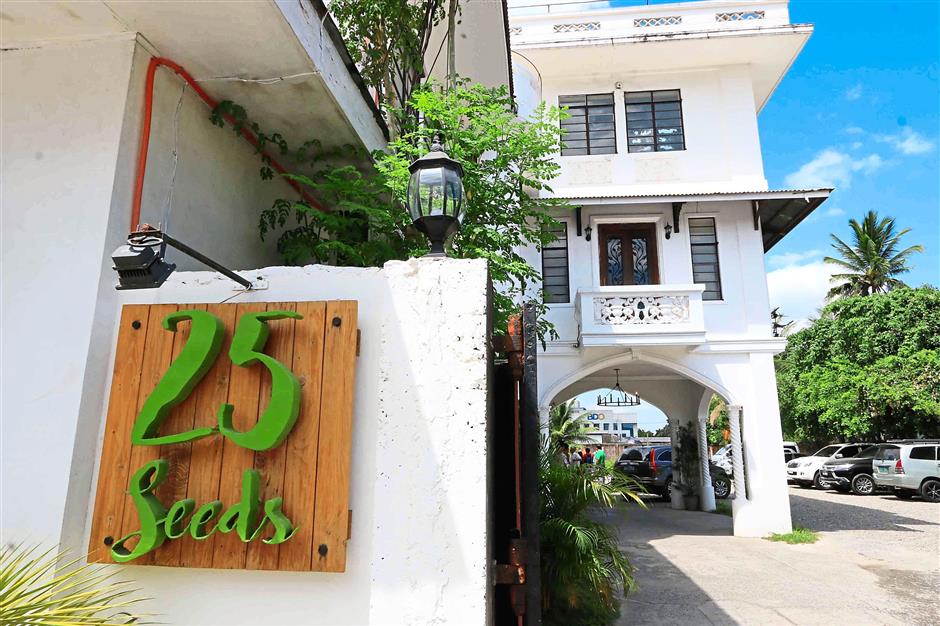 “Culture is best served on a platter,” he says. “Food is my story; every bite is a bite of culture. When I was working in a French kitchen, I decided to cook Filipino food for the team every Saturday. The chefs were curious why there was both paella and steamed dumplings in Filipino cuisine.

“Well, you are what you eat, and you eat what you are. You need to know where you are coming from; the word ‘Manila’ means ‘where the nilad palms are’ and the Philippines was named after the king of Spain. We must also remember that the Chinese have been here since the 9th century.

“Here in Pampanga, rice is grown in the fertile fields. The lava of Mount Pinatubo flows into Pampanga, the basin of Luzon.”

Del Rosario says he is back as “This is my moment, to show the new generation what Philippine cuisine can be. The youth are turning their backs on traditional food for something Italian, American or Japanese.”

He started 25 Seeds with a farm to table concept, working with 25 farmers in the area and focusing on Pampanga and Filipino cuisine. They planted the seeds of 25 dying plant species in the land around them.

“As I had been travelling, I felt the guilt of not being home and now love the reconnection with those I grew up with. It is a challenge to do traditional food as there will always be those who will tell you, ‘my mother/aunt/sister does it better’.

“I cook bringing all my experiences around the world to bear,” says the 52-year-old Del Rosario. “We are half this and half that; we don’t know who we are. So I say cook Filipino food at home – through food we will realise who we are.”

At 25 Seeds, a spread of Del Rosario’s modern Filipino food awaits us. It holds the seeds and DNA of Filipino food but is cooked to technical perfection and presented beautifully: no longer “brown, oily and ugly.” 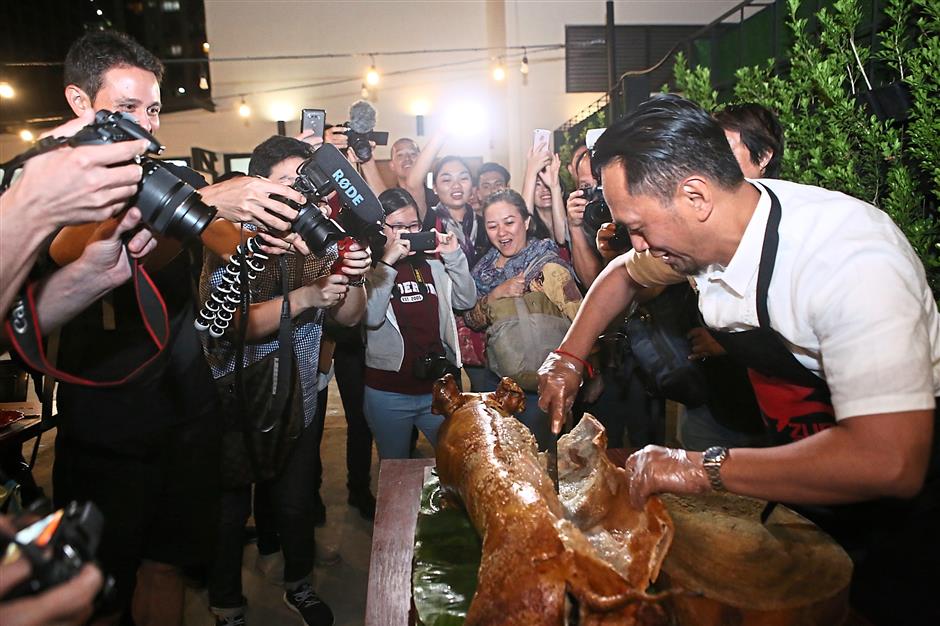 Del Rosario cutting up the Zubuchon lechon at the end of the food crawl from Manila to Pampanga and back. Photo: Makansutra 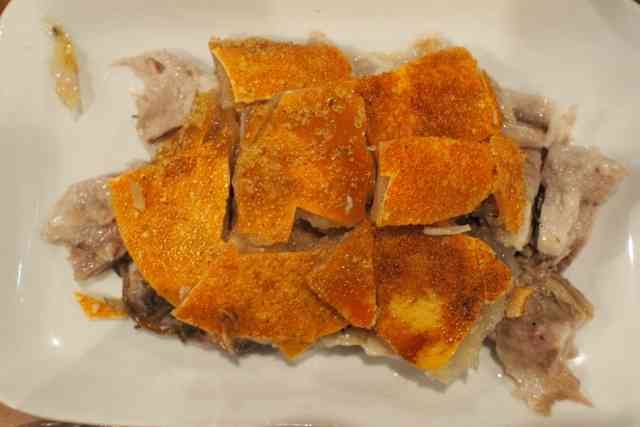 No food trip can end without a taste of lechon, the justifiably iconic Filipino roast suckling pig. The pig that won the heart and gut of Anthony Bourdain is Zubuchon in Makati, a Cebu-based lechon restaurant by Joel Binamira of Market Manila. Bourdain called it “the best pig ... ever!” The lechon is roasted for three hours; the 35kg lechon would be reduced to 24kg after roasting. Zubuchon takes pride in using fresh coconut water to baste the skin. The belly is stuffed with spices and natural sea salt, and the pig’s skin is hand-pricked to make it crisp and last longer.

What can we say about roast pork with skin so light, thin and crispy, and meat so tender, tasty and juicy? Honestly, to die for.

Everything you've wanted to know about Filipino food