With cats outnumbering humans six to one, this is either heaven or hell depending on how much meow you can take.

An army of feral cats rule a remote island in southern Japan, curling up in abandoned houses or strutting about in a fishing village that is overrun with felines outnumbering humans six to one.

Originally introduced to the mile-long island of Aoshima to deal with mice that plagued fishermen’s boats, the cats stayed on – and multiplied.

More than 120 cats swarm the island with only a handful of humans for company, mostly pensioners who didn’t join the waves of migrants seeking work in the cities after World War Two. Above and below, a glaring of feral cats on the Japanese island of Aoshima wait by the harbour with their keen eyes watching out for tourists bearing snacks. – Reuters 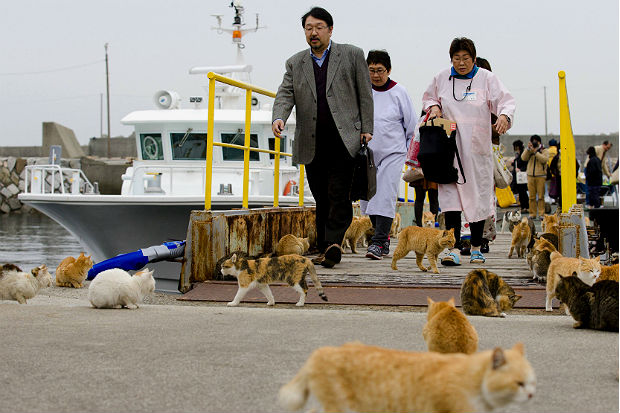 Aoshima, a 30-minute ferry ride off the coast of Ehime prefecture, had been home to 900 people in 1945. But those days are long gone. The only sign of human activity now is the boatload of day-trippers from the mainland, visiting what is locally known as Cat Island.

With no restaurants, cars, shops or kiosks selling snacks, Aoshima is no tourist haven. But cat lovers are not complaining. “There is a ton of cats here, then there was this sort of cat witch who came out to feed the cats which was quite fun,” says 27-year-old Makiko Yamasaki. “So I’d want to come again.”

The allure of cats is not surprising in a country that gave the world Hello Kitty, a cartoon character considered the epitome of cuteness. Cat cafes have long been popular in Tokyo, catering to fans who can’t keep the animals at home because of strict housing regulations that often forbid pets. Aoshima's cats come in different poses: sleepy (above) and jumping (below). – Reuters The cats of Aoshima are not too picky, surviving on the rice balls, energy bars or potatoes they cadge off tourists. In the absence of natural predators, they roam the island without fear.

Not all the residents are admirers, though. One elderly woman shoos the animals away with a stick when they dug up her back garden. Locals are trying to keep the feline population in check – at least 10 cats have been neutered.

Residents haven’t taken too kindly to the tourists either. They don’t mind them coming, but want to be left in peace.

“If people coming to the island find the cats healing, then I think it’s a good thing,” says 65-year-old Hidenori Kamimoto, who ekes out a living as a fisherman. “I just hope that it’s done in a way that doesn’t become a burden on the people who live here.” – Reuters Some of Aoshima's residents are not too happy about the feral felines but it seems as though the whiskered ones have the final meow. – Reuters
Article type: metered
User Type: anonymous web
User Status:
Campaign ID: 1
Cxense type: free
User access status: 3
Join our Telegram channel to get our Evening Alerts and breaking news highlights