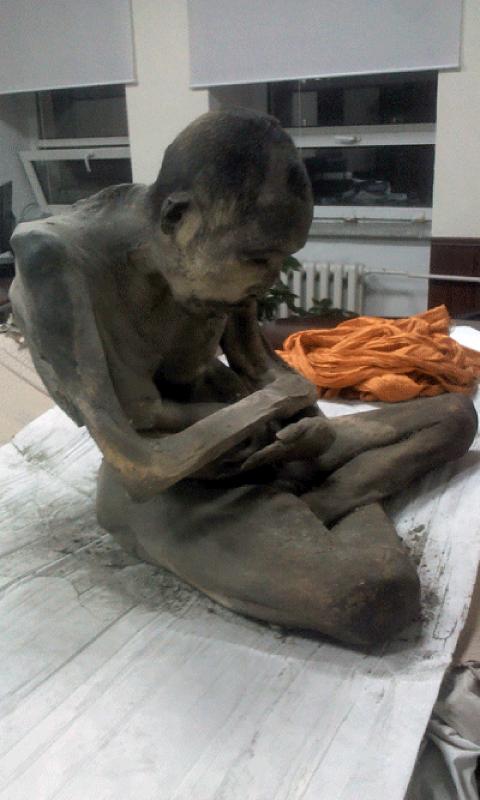 For more than a century, he sat in a meditative pose in remote western Mongolia before being thrust into the spotlight by an unscrupulous thief.

The discovery of the near perfectly preserved mummy of a Buddhist monk born almost 200 years ago may have baffled many, but it is also shining a light on how the religion venerates relics of holy figures. The corpse, still sitting in the lotus position, was recovered in the Central Asian country’s capital of Ulan Bator after being stolen from its provincial resting place by a man who aimed to sell it.

The remains are believed to those of a monk named Sanjjab who lived from 1822 to 1905, according to G. Purevbat, a noted Mongolian Buddhist artist and lama (or spiritual teacher) involved in the investigation into the identity of the recovered mummy, as well as its long-term preservation.

Purevbat said that the deceased monk had been a disciple of the Geser Lama, a revered figure in Mongolian Buddhism who lived from 1811-1894.

“He is preserved so well, so beautifully,” said Purevbat in an interview at the Ulzii Badruulagch Monastery, located in the snowy mountains of Tov province, about a 90-minute drive from Ulan Bator. Purevbat is head of the monastery.

“Once they finish the cleaning, it will look like (the) real features,” he said, adding that dust and earth had accumulated on the mummy’s body and that it was now being carefully prepared for reinterment.

Mummified holy figures are a vital spiritual force for Mongolian Buddhists, with some believers maintaining that senior lamas whose bodies have been preserved are not really dead. “We believe they are alive, therefore we believe they are living gods,” Purevbat said.

Photos published shortly after the body’s discovery show a bony, dusty-looking figure sitting with legs crossed, one palm slightly upturned with its head and upper body bent forward. Requests to see the mummy, now in the hands of forensics officials in Ulan Bator, were rebuffed. Purevbat cited the need to conclude the investigation and properly clean the mummy before showing it to the public. 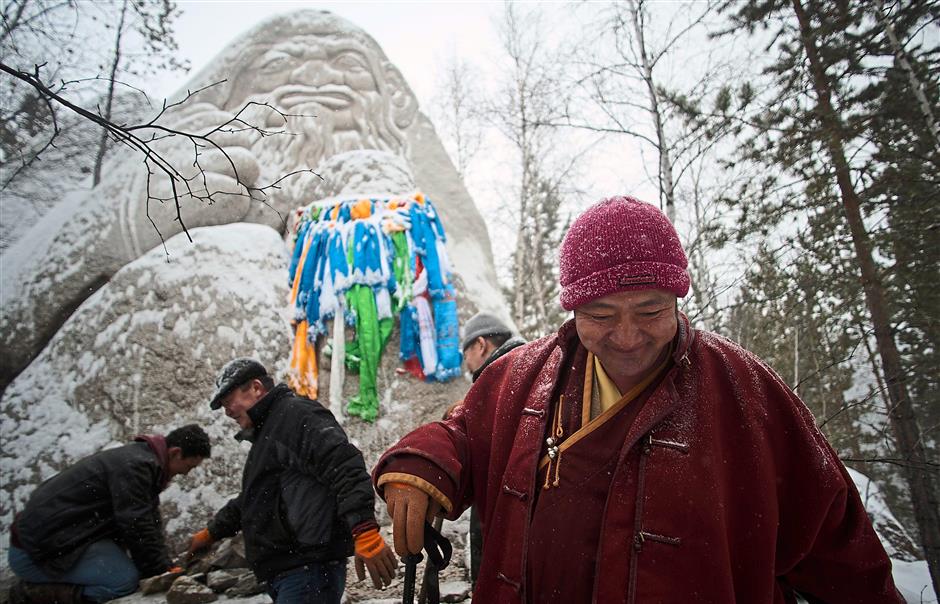 Purevbat, founder of the Aglag Meditation Temple, stands in front of a stone carving known as ‘the white old man’ at the Ulzi Badruulagch Monastery. Purevbat in front of a stone carving known as the ‘Ingot Rock’.

Jonathan Mair, an authority on Buddhism at the University of Manchester in Britain, said that the preservation of bodily relics in the faith goes all the way back to the Buddha himself.

“In Tibetan Buddhism (as practised in Mongolia), intentional preservation of the bodies of important religious teachers is commonplace,” he said in an e-mail. “The body is placed in the lotus position, as in this case, before being packed in salt or other preservatives for a period of years” and eventually being exhumed and put in a stupa, or shrine, he said.

The exact circumstances of Sanjjab’s mummification were not immediately clear and may come to light after the ongoing investigation is complete. Mair, however, cited the country’s weather conditions as a possible factor.

“Mongolia has a very dry climate and it is possible that this has contributed to the preservation of the body,” he said. “There have also been cases of attempted – and sometimes successful – self-mummification, in which the body is prepared through an arduous process involving starvation, culminating in a meditation-unto-death.”

“This is well-documented in Chinese, and especially in Japanese Buddhism, and it has been suggested that it is also practised by Tibetan Buddhists,” he added.

Buddhists in Mongolia were subject to intense persecution during much of the 20th century when the country was a communist satellite of the Soviet Union.

The oppression involved the destruction of numerous stupas, temples and monasteries and the killing of some 24,000 lamas in the 1930s, according to Purevbat. He illustrated the nature of the violence by showing photos of bones and skulls of executed lamas – some with bullet holes – that he has worked to collect.

Mongolia, in 1990, threw off Soviet control in the aftermath of the collapse of communism in Eastern Europe and swiftly transformed itself into a vibrant democracy.

The Ninth Bogd Jebtsundamba, the Tibetan-born spiritual leader of Mongolia’s Buddhists who had been forced to spend most of his life outside the country in India, died in 2012 and has been subject to mummification at Ulan Bator’s Gandan monastery. The original sites of Sanjjab and the Geser Lama’s remains are two small separate stupas on Sodnomdarjaa Mountain in the country’s west central Arkhangai province.

Sanjjab’s body will eventually be returned to its original resting place, although officials plan a more secure structure to avoid a repeat theft and will also build a small temple where the faithful can pray, Purevbat said. He added that while Sanjjab’s mummy was looted, the remains of the Geser Lama were not taken because “his energy protects him”.

“Just a simple man on the street can’t reach him because he’s very powerful,” Purevbat said. “No one can reach him.” – AFP