Can anything stop the rhino poaching crisis?

Killing demand is the only way to curb the slaughter of rhinos for their horns.

AT the end of the 19th century, a group of 20 to 50 southern white rhinoceros were discovered in the Umfolozi-Hluhluwe region of South Africa. The species had been thought lost to the guns and trophy rooms of colonial hunters. Today their population is more than 20,000.

The programme that brought the species back from the scrap heap of extinction is considered to be one of conservation’s great success stories. But a massive surge in poaching threatens to undo more than a century of careful protection and management.

The southern white rhino is the world’s only rhino species not considered threatened by the International Union of the Conservation of Nature. Before 2010, the population was increasing by 4.5% each year. But by 2012, poaching had slowed the growth rate to just 0.7%. Southern white rhino numbers may now be declining for the first time in a century. 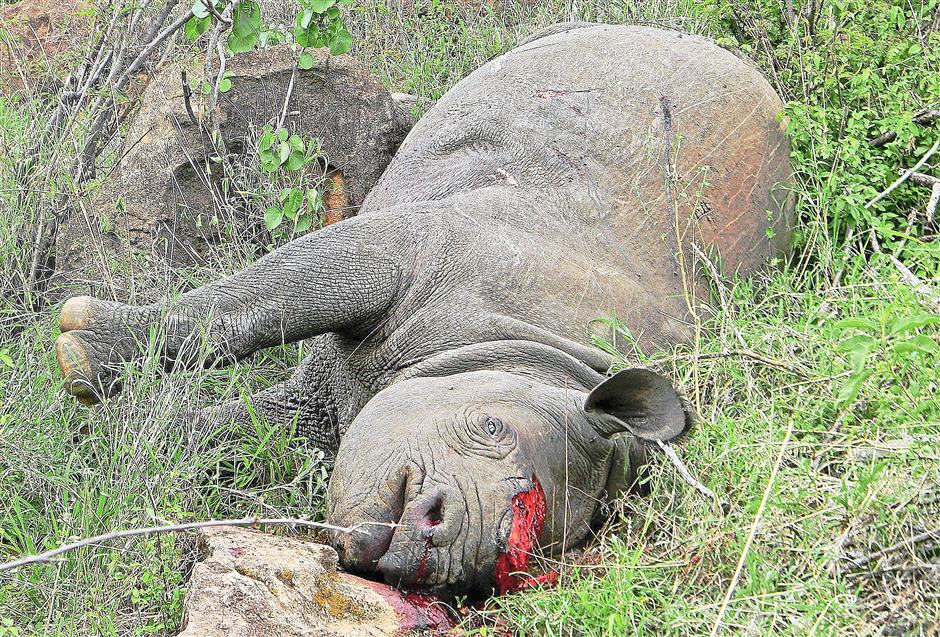 This black rhino was killed for its horn at the Lewa Conservancy in northern Kenya. Photo: AFP

Poaching is driven by the growing market for rhino horn in ever-more affluent East Asia. The horn is primarily made out of a material similar to keratin – the stuff that makes up hair and fingernails. It has been used in traditional Asian medicine for centuries. The now mostly extinct or endangered Asian rhino species were hunted because of a misbelief their horn could treat fever and cerebrovascular disease.

In recent years rhino horn has been endowed with further fantastical properties that treat cancer and cure hangovers. The common notion that rhino horn is used as an aphrodisiac in Asia is derogatory and untrue, according to wildlife trade observers Traffic. However, that belief is prevalent in Chinese society.

Rhino horn has also become a “Veblen good” says Daniel Stiles, an independent wildlife trafficking consultant who works with various anti-poaching NGOs and the United Nations. This is a commodity that grows more desirable the more expensive it becomes.

“The horn is now also being made into bangles and other status ornaments for the wealthy to show off with,” he says. Nothing will curb poaching while the payoffs remain so high, says Stiles. “There is only one solution, kill demand. Convince consumers that rhino horn has no medicinal value whatsoever.” He says the use of horn as a status symbol “needs to be attacked forcibly by creating stigma, as with fur coats in the west”.

Public education is the key tool available to combat the traffickers’ business model, says Davin O’Regan, a wildlife trafficking expert at the Africa Centre for Strategic Studies. In a survey of Chinese people by Wild Aid last year, two thirds of respondents thought rhino horn was obtained legally from rhinos that had died naturally or been farmed. Half did not realise it was illegal to purchase horn in China.

“After I heard that there is no difference between a rhino horn and a human fingernail in nature, I think it might have no especially great medicinal value,” a Beijing woman told the survey.

O’Regan says this shows the scope for public education in the East: “There is a lot of room for addressing these information gaps and legal misunderstandings, which should put a dent in rhino horn demand, its price, and eventually its supply via poaching. Given the current pace of poaching, however, such action must be urgent.”

Traffic spokesperson Dr Richard Thomas says engagement in Vietnam and China is still in its early stages. But encouraging initiatives have already emerged, including workshops with Vietnamese traditional medical practitioners and a deal with the world’s (and China’s) largest online trader Alibaba to stamp out illegal animal products.

Thomas admits these efforts are simply scratching the surface, but says the approach has encouraging historical precedents. “Japan was once the world’s largest illegal ivory consumer but today barely features in illicit ivory trade. In the 1970s, Yemen and South Korea were major rhino horn consumers, but again barely feature, if at all. It’s all about changing what’s fashionable ... and fashions will and do change, although rarely overnight.”

The international crime syndicates that run rhino horn from Africa to Asia are influential. How much money changes hands between officials in Vietnam and China and the traffickers is unknown and a dangerous area for NGOs to get into. Vietnamese officials have been implicated in the trade. One diplomat was filmed taking receipt of rhino horn in 2008. It is difficult to know what effect this will have on efforts to engage with domestic politicians and stamp the trade out. 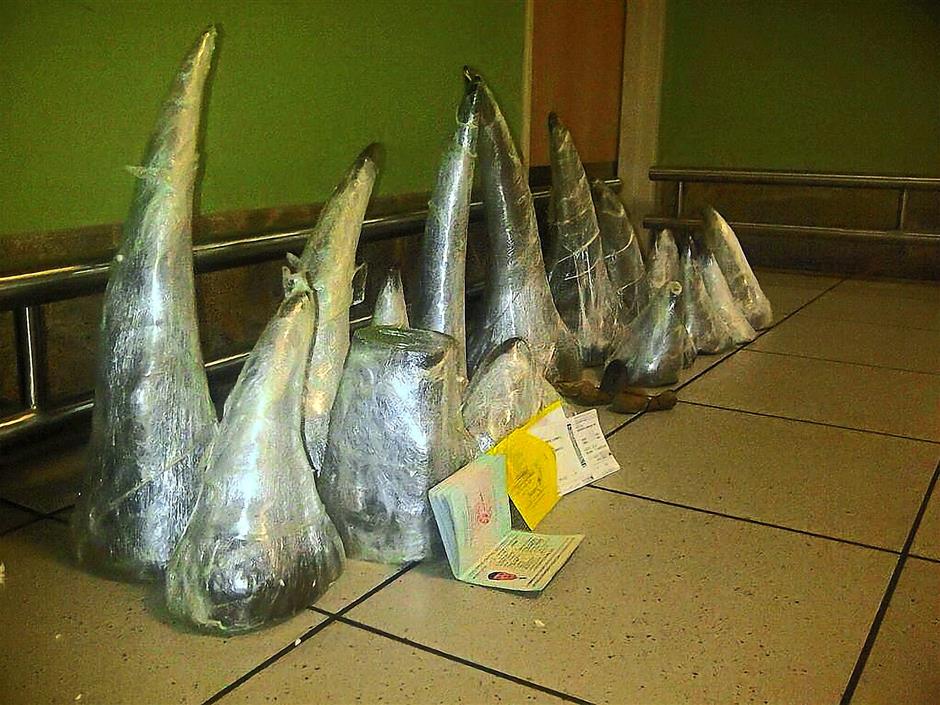 A large cache of 41kg of smuggled rhino horns seized in October at the O.R. Tambo International Airport in Johannesburg from two vietnamese passengers leaving the country on a flight to Hanoi which originated from Mozambique. Photo: AFP

Around 90% of southern white rhino live in South Africa, with smaller populations in Namibia, Botswana, Zimbabwe, Swaziland and Mozambique. The burgeoning wealth of Asia is flowing into the hands of African poachers in return for lucrative contraband that is relatively low risk and easy to attain.

“Killing on this scale shows how rhino poaching is being increasingly undertaken by organised criminal syndicates. The country’s brave rangers are doing all they can to protect the rhinos but only a concerted global effort can stop this illegal trade,” he says.

South African environment minister Edna Molewa says the country moved roughly 100 rhinos from “poaching hotspots” to safer areas in 2014 and made 386 arrests, 43 more than the year before. Even so, she said, the poaching figures were “worryingly high”. “But given the highly organised nature of the syndicates, we believe these figures could be considerably higher were it not for our interventions.”

Interpol environmental crime programme manager David Higgins says the South Africans have been doing a good job of making arrests at the primary poaching level. But higher level operators hide across borders in Mozambique and overseas. He says the syndicates can “absolutely” be broken so long as more funding is made available in the right areas.

“We really need to have stronger transnational investigative focus if we’re going to address this,” he says. “There needs to be stronger financial investment into Mozambique ... because at the moment the motivation is probably there. They’ve got some political will but they don’t have the financial mechanism to be able to allow them to engage.”

Kruger National Park in South Africa is home to around half of the world’s southern white rhinos. It is also the population most targeted by poachers. According to Jason Bell, International Fund for Animal Welfare southern Africa director: “The South African Government has thrown an enormous amount of resources, both financial and in terms of manpower, at anti-poaching efforts in Kruger. There is little more that can be done on the ground.”

According to Stiles, “boots on the ground and drones in the air ” will only act as a band-aid when confronted by the extreme value of the horn. Kruger’s annual anti-poaching operations budget is around US$1.5mil (RM5.4mil). Yet as much as US$200mil (RM723mil) worth of rhino horns may have been removed from the park (based on a value of US$45,000/kg) last year. Well-resourced poachers have the means to offer rangers attractive bribes to leak information, turn a blind eye, leave open gates on electrified anti-poacher fences or “even pull the trigger” themselves, says Stiles.

Private reserves, as opposed to national parks, have been shown to be an effective tool against the poaching of rhinos and elephants in Africa.

“Private reserves tend to be better managed than public ones, regardless of the size. There tends to be less corruption with private reserves because the staff is paid and treated better than government rangers,” says Stiles.

A lot of things need to go right for the poaching business to be undermined. The International Union for Conservation of Nature says the southern white rhino could be listed as vulnerable as early as next year, but poaching is merciless and has no respect for the conservation status of a species, or interest in a sustainable population. In fact, within the brutal logic of the rhino horn market lies a cynical imperative to drive the species to extinction. Investors are buying up horns and banking them, waiting for the day when the last rhino is killed and the horn price soars.

“Even if poaching becomes harder as the number of rhinos decreases, that will not prevent poaching,” says O’Regan. “This is the same phenomenon we have seen in the over-exploitation of world fishery populations, tigers, numerous bird species, and rare forest products. As these populations decline, the price for their parts increases. Consequently, as long as individual poachers have a financial incentive, they will pursue an animal to its extinction.”

Other species and populations of rhino show rarity is no protection. In 2010, what is thought to have been Vietnam’s last rhino was found dead with its horn cut off. Only five northern white rhinos survive after the species was destroyed during the 20th century. Just over 5,000 African black rhinos remain. The greater one-horned rhino of India and Nepal is down to its last few thousand. And the Sumatran rhino numbers less than 100.

Yet poachers still pursue them all. – Guardian News & Media