Car-free KL once a month

NOT enough publicity has been spread about Kuala Lumpur Car Free Morning on the first Sunday of every month.

Actually, it’s the perfect time to bond with family and friends, whether you choose to run, cycle, skate or just walk around taking in the sights of our much loved KL city.

As the morning mist lifts, Dataran DBKL (at KL City Hall) comes alive with Malaysians of all walks of life. They have travelled from far and wide to experience a morning in the city, without the hustle, bustle and fear of motorised vehicles.

KL Car Free Mornings allow everyone to glide through the city, and explore the landmarks of Sogo, Pertama Complex, Hard Rock Cafe along Jalan Raja Laut, Jalan Sultan Ismail and Jalan Dang Wangi. It then loops around to Jalan P. Ramlee and Jalan Ampang, for a total distance of 6.5km. The only time when young children can cycle through downtown KL.

Take your time to soak in the sights and smells as you can normally only whiz by hurriedly (or frustratingly in a traffic jam) in a car or bus in this area.

There’s usually an organised bicycle ride which flags off at Dataran DBKL, leading everyone along the said route. However, you can also ride as you please as the multiple lanes along the route mean plenty of space for everyone. Apart from cycling, you can also run, jog, skate, skateboard or just enjoy a leisurely stroll. If you’re feeling creative, you could even hold a picnic or play a few strokes of badminton. Prams and skaters were seen at KL Car Free Morning on Aug 3.

Gan CG from Klang, drove and parked at Taman Jaya LRT station, Petaling Jaya. She then took the LRT with a friend to let him have a taste of KL Car Free Morning. A brilliant option compared to scouting for parking within the city.

Both of them have foldable bicycles (also known as foldies) and they could board the LRT smoothly with their bikes without needing to bag their bikes either. By chatting with other commuters, she helped spread the awareness and interest on KL Car Free Mornings.

Usually, Gan cycles for leisure with at least four different groups and it’s at KL Car Free Mornings that they get to rekindle and renew their friendships. Gan hadn’t cycled since 1974 and had only taken up cycling 16 months ago as a retirement hobby – it’s never too late to dust off that rusty old bicycle and get going with it! Some come in style as Moses Lim (right) with his wife did during the KL Car Free Morning in February.

For Gan, who lives in a pre-dominantly Chinese community, one big benefit of cycling is that it allows her to fraternise and make friends from other racial groups, thus fostering racial harmony – on wheels!

Memories frozen in photos will then be shared online for her Facebook community. As eating is Malaysia’s national pastime, after the ride, she and her friends adjourned to Jalan Tun HS Lee for the famous beef noodles.

Alicia Teoh drove in specially from Setia Alam, Shah Alam, to catch the once-a-month KL Car Free Morning and revelled in cycling alongside her husband and nine-year-old son on the roads leading to KLCC. They brought three bicycles using a rear car rack and parking was also conveniently available near Dataran DBKL. 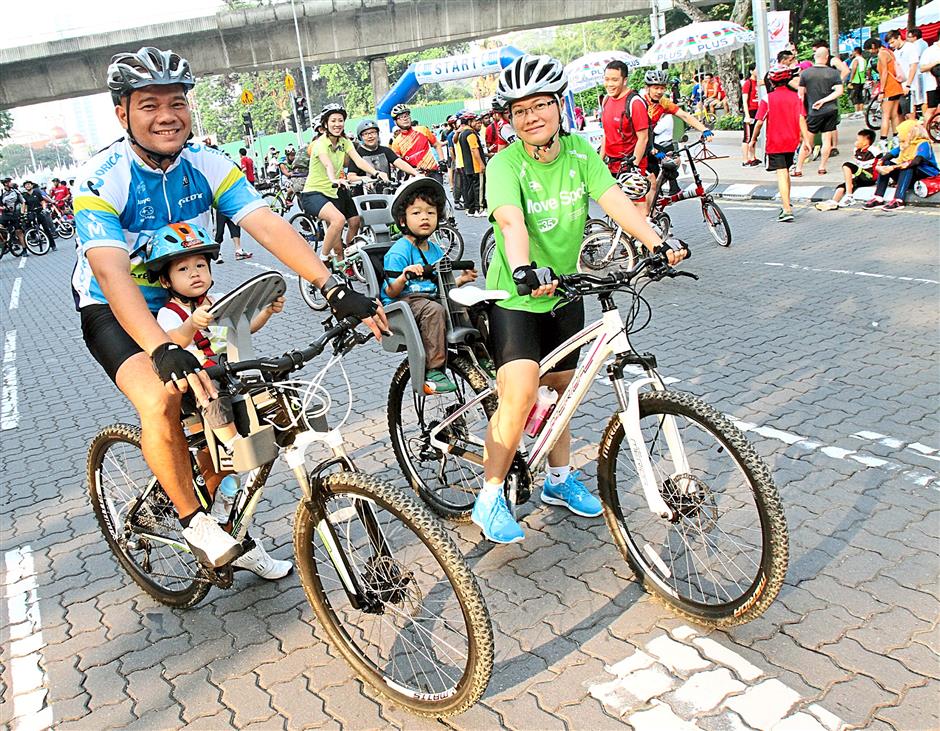 Many parents often bring along their children to KL Car Free Morning as a healthy family outing.

Due to the heavy traffic, they usually refrain from riding on roads and prefer mountain biking. However, KL Car Free Morning provided them with a perfect worry-free opportunity for parents to run or cycle alongside their children as the streets had been cordoned off.

Mothers were also seen happily pushing strollers while others took to skateboards and roller skates. These are memories which will be shared by families, perhaps for a lifetime.

A group of runners ran past happily while enjoying the clean crisp cool morning air that you’d seldom get to experience in the city. Usually, they’d run in Bukit Tunku, avoiding the KL city centre due to traffic.

One of them was Chan Kin Hou, who chose to park at the KL Lake Gardens. Car Free Mornings allow them to run through the city breathing fresh air. They also had lots of time to take snapshots at various landmarks including the Petronas Twin Towers. This is one place when people of all races gather to share stories and chatter while lending a hand to take photos of each other. Who says unity is dead?

Much of the old city may be redeveloped. Perhaps, this is a great time for the younger generation to have a historical tour through the streets?My next KL Car Free Morning ride shall be oriented around the historical bits of the city which may soon be lost to “progress”.

You can also organise themed visits around the city on topics such as street life or breakfast stall hopping. Or, why not swing round to the National Monument and Bird Park in the KL Lake Gardens adjacent to the city after the car-free hours have ended?

I’m all for more KL Car Free Mornings. Let’s spread the word and experience something fresh and free in KL once a month.