A message in a bottle tossed into the sea in Germany in 1913, believed to be the world’s oldest, has been presented to the sender’s granddaughter.

A fisherman pulled the beer bottle with the scribbled message out of the Baltic Sea off the northern city of Kiel last month, Holger von Neuhoff of the International Maritime Museum, in the northern port city of Hamburg, announced on Monday. 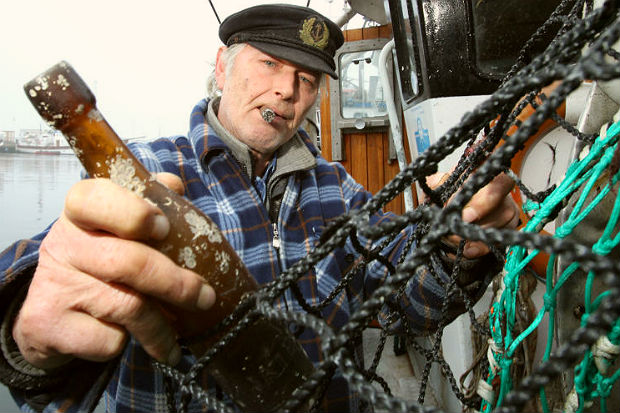 Konrad Fischer, the man who fished out the bottle from the waters of the Baltic Sea after it had been bobbing 'somewhere out there' for 101 years. Fischer is now the rightful owner of the message and the bottle, which are on loan to the International Maritime Museum, in Hamburg, Germany.

“This is certainly the first time such an old message in a bottle was found, particularly with the bottle intact,” he said.

Researchers then set to work identifying the author and managed to track down his 62-year-old granddaughter Angela Erdmann, who lives in Berlin. “It was almost unbelievable,” Erdmann told German news agency DPA.

She was first able to hold the brown bottle last week at the Hamburg museum. 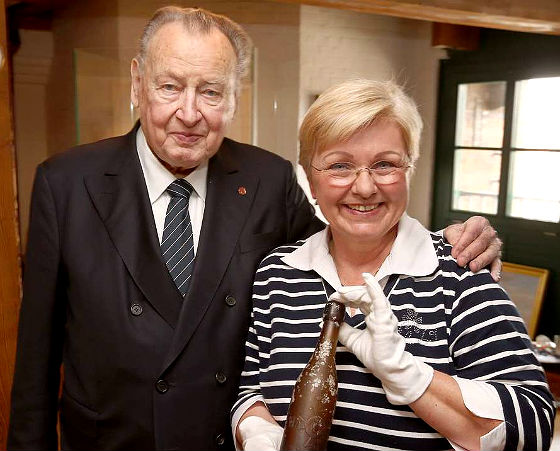 Professor Peter Tamm and Angela Erdmann with the bottle at the International Maritime Museum, in Hamburg, Germany.

Inside was a message on a postcard requesting the finder to return it to his home address in Berlin.

“That was a pretty moving moment,” Erdmann said. “Tears rolled down my cheeks.”

Von Neuhoff said researchers were able to determine based on the address that it was 20-year-old baker’s son Richard Platz who threw the bottle in the Baltic while on a hike with a nature appreciation group in 1913. 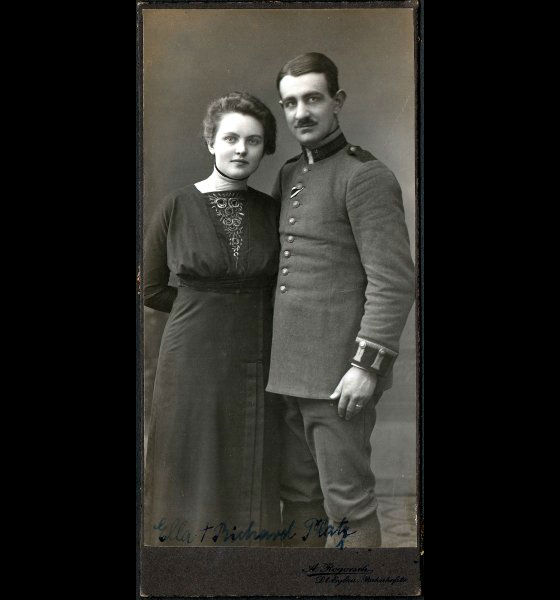 A photograph of Richard Platz, and his then-fiance (later wife), Ella Bromberg, in 1917, four years after he 'sent' the bottle out to sea.

A Berlin-based genealogical researcher then located Erdmann, who never knew Platz, her mother’s father who died in 1946 at the age of 54.

Von Neuhoff said a handwriting comparison with letters penned by Platz later in life confirmed that he was “without a doubt” the author.

Erdmann told local newspapers that the surprise discovery had inspired her to look through family scrapbooks to learn more about her grandfather, a Social Democrat who liked to read.

Much of the ink on the postcard has been rendered illegible with time and dampness, von Neuhoff said.

The discovery will be on display at the museum until May 1, after which experts will set to work trying to decipher the rest of the message. 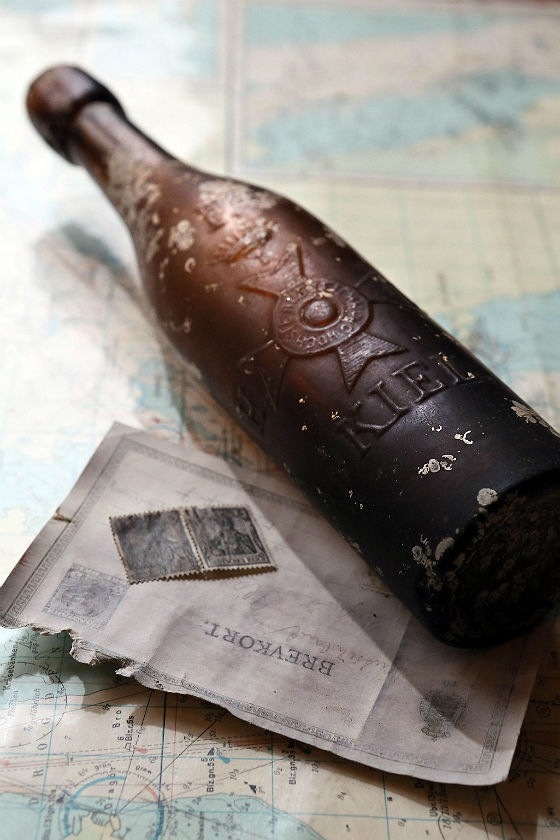 A century out at sea: Now that the message and bottle are back on dry land, it will face the scrutiny of experts who will decipher the now-blurry ink handwriting by Richard Platz, before it's returned to Konrad Fischer, the fisherman who netted it.

Although Konrad Fischer's find is being touted as the world's oldest message in a bottle, there's a chance it might not be.

A Gizmodo article highlighted a news item from 2013 that cites Steve Thurber's chance discovery of a message in a bottle while walking on a beach in British Columbia, Canada.

On the message that can be seen through the bottle, it's dated September 29, 1906 and signed by Earl Willard, who was sailing from San Francisco to Bellingham aboard the Steamer Rainier when he threw the bottle into the ocean.

This means that Thurber's was found 107 years after it was launched – six years older than Konrad Fischer's find. However, Thurber has so far refused to open the bottle for verification. This means that until Thurber's bottle is uncorked and proven to be older, Platz's message is the world's oldest verified message in a bottle to date.

The Guinness World Records had previously identified the oldest message in a bottle as dating from 1914. It spent nearly 98 years at sea before being fished from the water. – AFP/RelaxNews