The origins of Tamil newspapers in Penang

In the news: Dr Torsten Tschacher, in Penang recently with his wife Dr Deepra Dandekar, showing a digital recopy of one of the early Tamil newspapers called 'Penang Gnanacharian Daily News', which he obtained from the National University of Singapore library. -- CHAN BOON KAI/The Star

Penang was the birthplace of a number of Tamil newspapers during the British colonial days, says a German researcher.

LONG before Malaysia’s oldest Tamil newspaper Tamil Nesan was established in 1924, the promotion of Tamil literary work in the country could be traced back to the Straits Settlements in late 19th and early 20th centuries of the British colonial era.

And, Penang, which was part of the Settlements, had played a pivotal role in the birth of several Tamil newspapers that were largely initiated by Penang-born Muslim Tamils of South Indian descent, and later on by the Hindu Tamils.

This chapter of the local Tamil newspapers’ development was recently highlighted during a Penang Story Lecture at Wawasan Open University in George Town – not by a local historian, but by German lecturer Dr Torsten Tschacher.

He presented a paper titled For The Promotion Of Tamil On This Island: Penang Muslims And Tamil Vernacular Publications Across The Bay Of Bengal, 1880-1914.

A day earlier, the 37-year-old academician, who speaks, reads and writes in fairly good Tamil, had given a similar lecture in Western-accented Tamil at Dewan Makam Noordin in Kapitan Keling Mosque in George Town.

“I started learning Tamil formally in Germany in 1998,” said Dr Tschacher, a lecturer in Tamil language and culture at the Centre for Modern Indian Studies in University of Gottingen back home.

He was in town with his wife Dr Deepra Dandekar, 39, who hails from Pune, North India. She is a post-doctoral researcher in Heidelberg University, Germany.

“Over the last few years, I began researching on Tamil newspapers in Singapore and Penang during the Straits Settlements era to find out how different it was from the print scene in India,” explained Dr Tschacher.

In an interview before the talk at Wawasan Open University, Dr Tschacher spoke with interest and authority on the fledgling local Tamil print industry.

He noted that the individuals involved in it then were interlinked with other parts of the Straits Settlements – the British-controlled territories that also comprised Malacca and Singapore – and South-East Asia.

He said many readers actively engaged with the newspapers from different locations through letters published as well as donations sought by those publications.

“For example, there was a list of Indian Muslim donors from as far as Saigon (Vietnam) who supported the Ottoman Empire during the Balkan War that appeared in the Penang Gnanacharian on Oct 10, 1913.

“The Penang authors and editors also maintained links with their counterparts across the Bay of Bengal, by publishing articles from each other’s newspapers, as well as by reflecting them in short stanzas for poem prefaces.

“Letters from Penang and Singapore readers sometimes found their way into newspapers in India and Ceylon (now Sri Lanka) and vice versa,” he said.

Dr Tschacher said among the newspapers that had engaged in open “debate” was the Muslim Nesan from Kandy, Sri Lanka, and Penang’s Vidya Vicharini, which was believed to be the first Tamil newspaper out of the northern state that was published in 1883.

Vidya Vicharini, he said, was published by V. Ghulam Kadir Navalar, a well-known poet who returned to India in 1890 but kept in touch with the people of Penang.

“This association was reflective in several poetry books found in Singapore and Penang in which he had penned the sirappu paayiram (preface),” he said.

The first Tamil newspaper in Singapore, he said, was believed to be the Singai Varthamani published by C.K. Makhdoom Sahib in 1875.

Dr Tschacher said the locals back then ventured into publishing vernacular papers in a bid to shift the focus from the colonial gaze and issues to Asian concerns.

Interestingly, in Singapore and Penang, the vast majority of literary work and newspapers in Tamil were produced by Muslims, at least up to World War I (1914-1918), he revealed.

“This was rather unusual because, when you look at India, while the Muslims there printed some texts and published a few newspapers, most of the printing/publishing business back then was in the hands of Christians and Hindus,” he said.

The newspapers in Singapore and Penang, he added, were ordinary secular publications run by Muslims, with Islamic topics receiving special coverage.

“But at the same time there were topics that were important to the Hindu community, such as temple management and the Hindu Association of Penang.

“Interestingly, the people freely wrote to these newspapers on internal troubles in their community or organisations despite the fact that the owners and editors were Muslims. And those letters were published.”

Dr Tschacher said the early Tamil newspapers, which had between two and four broadsheet pages per edition, generally contained six sections – announcements, an editorial, news, articles from other papers, letters and advertisements.

The main topics concerned the newspaper itself and its relation to the readers, local community news, religious matters as well as world events and the locals’ reactions towards them such as the Ottoman and British Empire wars and the situation in India.

“Only in the late 1920s and early 1930s that some of the more successful Tamil dailies could afford to increase their pages to 12 due to revenue from advertisements.

“The Tamil movie industry indirectly helped as the local cinemas would often place ads to promote the latest screenings,” he said.

Another Tamil newspaper in Penang before 1887 was the Vijaya Kedanan by publisher S.P.S.K. Kader Sahib, who also produced the Malay newspaper Tanjung Penegeri (1894-1895).

Dr Tschacher said, however, the majority of the Tamil newspapers in Penang started after 1887, following the implementation of the Book Registration Ordinance, which took effect from Jan 1, 1887.

Under the rule, every book or newspaper that was published in the Straits Settlements had to be registered with the authorities, and three copies of each newspaper had to be submitted daily to the government, of which one copy was sent to London.

“The others were kept in local libraries. A majority of them are still available at the London British Library and the National Library in Singapore,” he revealed.

Dr Tschacher said there were 34 Tamil publications registered in the Straits Settlements between 1887 and 1914, nine of which were from Penang.

He said most of the Tamil publications in Penang were published by their respective authors, who also compiled articles that were translated from the English and Malay press.

Although those publications were printed in large printing presses locally, their market was relatively small because of low print runs, for example, the Hindu Nasen (1887) only printed 150 copies fortnightly while Janopakari had some 600 copies daily, he added.

Dr Tschacher said that apart from newspapers, poetry books written by Tamil Muslims also made up some of Penang’s rich Tamil literature.

“For example, Kosha Marican, in his 1895 poetry book titled The Penang Orchavam Thiru Alangara Sinthoo, talks about an annual procession at the Penang Nagore Dargah, and describes the different fruit stalls and merchants in Penang’s Little India enclave.”

That will be some history – one that heralds an industry that now produces as many as six Tamil dailies locally. 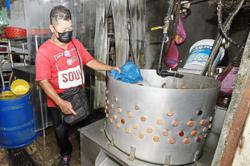