Bloody faces, headless bodies, burned houses – these are some of the stark and haunting images drawn by children who have fled deadly Boko Haram violence in neighbouring Nigeria for the relative safety of a refugee camp in western Chad.

At the Dar-es-Salam camp in Baga Sola, around 10km from Lake Chad, dozens of boys in dusty rags gather in front of a Unicef tent, elbowing each other and giggling.

The kids are getting ready for a drawing workshop run by the United Nations children’s agency.

Once inside the tent, calm descends as the kids, pen in hand, attempt to put their memories on a white piece of paper.

They are reconstructing the events they witnessed when Boko Haram Islamist fighters attacked their villages.

Sumaila Ahmed says he is 15 years old, but looks about 12. “The day of the attack we were in front of our door when we saw the Boko Haram. They went towards the people who were standing by the river and shot them. They shot them in the head,” said the boy.

On all fours, he draws the outline of a boat and bodies floating on the river. 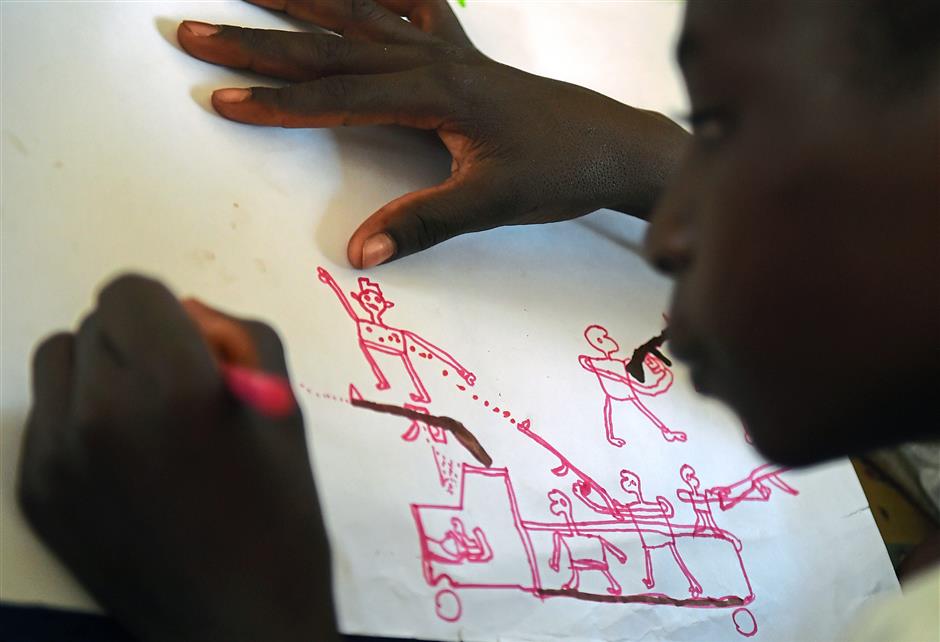 Sometimes putting their memories on paper is the way children express their emotions best.

“Those are the ones who could get onto the canoes, and they are fleeing. The others are dead,” said Sumaila, without blinking.

“This man is in his home. He is repairing it but he hears gunfire outside. When he goes to see what happens, a Boko Haram (fighter) comes in front of his house, shoots and starts a fire,” says Nur Issiaka.

“The man tries to leave, but he can’t find a way out. The whole house is in flames.” The man was burned alive, said the boy, as if recounting a banal incident.

The workshop is very popular with the children in the camp, said its organiser Ndorum Ndoki.

“They draw and then we can talk about the pictures. We have to push them to open up. It wasn’t easy at first, but now they’re proud to be heard,” Ndoki said.

His team tries to identify those who need more help than others, such as the children who remain detached from the group.

Every afternoon, in between games of football and boardgame sessions, the children at these workshops also address subjects like love or school.

The activities are a welcome relief from the daily grind of life on the camp, a time when the children can forget about food rations and the intense heat of this desert area. Bloody faces, headless bodies and burnt houses are just some of the stark and haunting images drawn by children who have fled deadly Boko Haram violence.

The 800 children at the camp attend an “emergency school” in eight temporary tented classrooms set up by Unicef in January.

“Before they knew nothing about schools, although some received Koranic education. Many had never held a pen, but here they learn quickly,” says Oumar Martin, a Cameroonian worker at the camp who had been living in Nigeria for years but himself escaped to Chad along with 18,000 Nigerians.

On the benches of these makeshift classrooms sit a few “big kids” – past the age of 20 – who also want to learn to read and write.

The mainly Muslim northeast region of Nigeria, where Boko Haram chiefly operates, is impoverished and has long been neglected by the country’s central government. Thanks to the schooling, the young people from these parts who speak only Hausa or Kanuri “can already form some phrases in English and jabber a few words in French”, Martin said.

Pursued by the Islamist insurgents, they fled to Chad on foot or crossed into the country on canoes across Lake Chad.

Around 140 of them arrived without their parents who were either lost in the confusion or killed by Boko Haram.

Mahamat Alhadji Mahamat, 14, took a week to get to the Dar-es-Salam camp. He made the journey with his uncles, hiding by day and travelling by night while his parents stayed on in Nigeria.

“I will never forget what I saw,” he said with a shy smile.

“There were even some babies who were born en route as we were fleeing.”

His drawing shows a few birds flying next to a truck full of guns of various sizes – like the ones he saw Boko Haram fighters drive.

Despite the horrors, he said: “I want to learn and one day I want to go back home to Nigeria.” – AFP