Penang-born Englishman returns to his birthplace 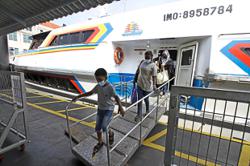 A young Englishman follows in his parents’ faded footsteps hoping to find some personal connection with the land of his birth.

IN 1956, Brian Baird was a young English teacher and, with a tentative interest in starting a new and exciting life away from the austerity of 1950s Belfast with his new wife, Stella, he answered a newspaper advertisement seeking Education Officers for teaching work abroad.

The offer came back with a post in Malaya, recently vacated by one John Wilson who had just left to begin a successful literary career under the pen name of Anthony Burgess, best known for his 1962 novel A Clockwork Orange. My mother had just discovered that she was expecting my elder brother, Stephen, but together they took the brave step in resigning from their jobs at Methodist College, where my mother was the school matron, leaving their families behind and travelling 9656km to a country they had barely heard of and embarking on a lifestyle they couldn’t possibly have imagined.

My father’s first posting was at Malay College, often called “the Eton of the East”, as its pupils included the sons of both the wealthy and well-connected, in the small Malay town of Kuala Kangsar. Following a five-year tenure, he accepted a teaching post on the island of Penang, where I was born, just six months before my parents returned to Belfast in 1963. 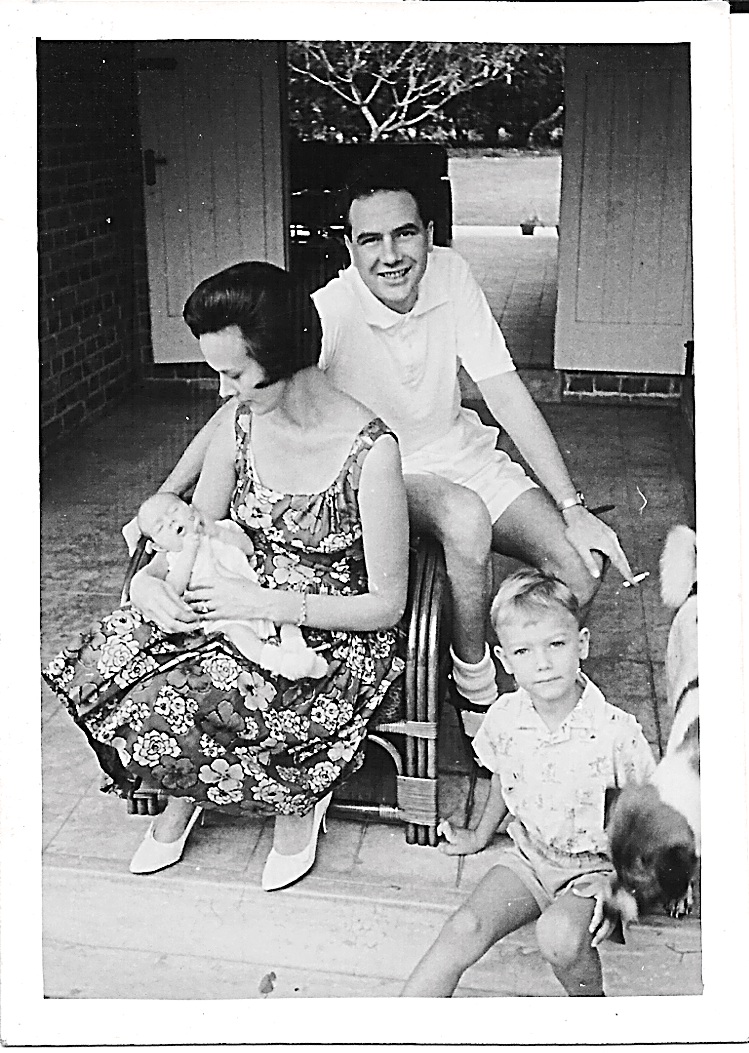 
Obviously I have no memories of my short stay in Malaya – or Malaysia as it is now known. But growing up surrounded by many reminders – such as strange and interesting food prepared from recipes my mother had acquired during her former life, Malay words or phrases used in everyday conversation and my fascination with my parents’ black-and-white photographs depicting very exotic-looking people in equally exotic locations – I had always planned to re-visit my birthplace.

With a significant birthday looming, it seemed like the perfect time to plan my return journey. My father died in 1998, but he had returned with my mother to Malaysia for a holiday in 1989, revisiting some of their old haunts. So earlier this year my wife and I set off in search of ghosts from the past, following in my parents’ faded footsteps as well as hoping to find some personal connection with the land of my birth.

Unlike my parents’ original voyage – which was during the Suez Crisis and involved a five-day flight, stopping to refuel at Düsseldorf, Rome, Istanbul, Baghdad, Basra and Columbo, before reaching Malaya – our journey was a little easier, with a single 13-hour flight from London, direct to Kuala Lumpur.

From our KL city centre hotel room at Trader’s by Shangri-La, we had probably one of the world’s best views. The magnificent Petronas Twin Towers – which, for a short time, was the tallest building in the world – stood directly in front of our 28th floor window. Situated at the base of the towers is the six-storey Suria KLCC shopping mall, surrounded by an urban sanctuary complete with palm trees and illuminated fountains which, by night, made for a very impressive display. 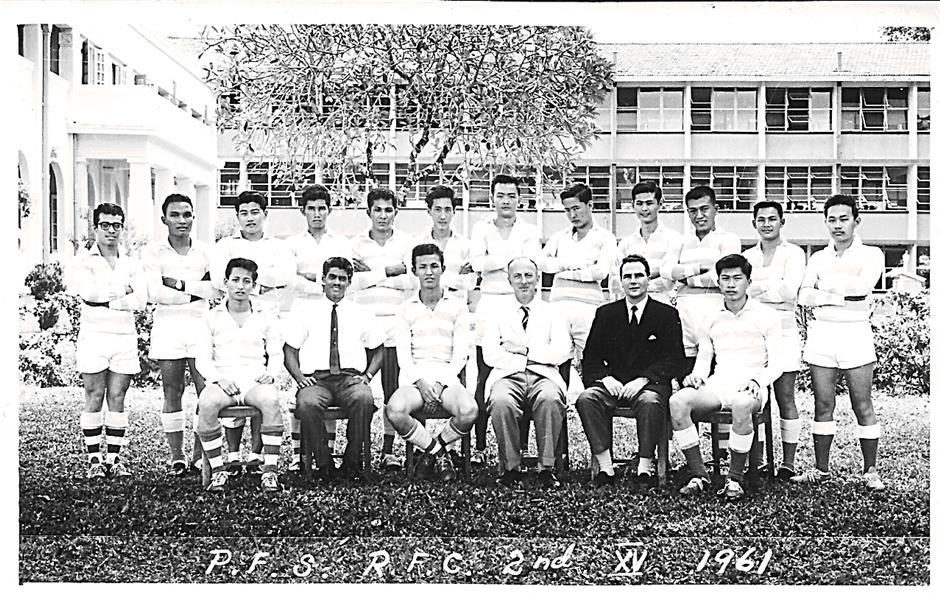 
The day after our arrival, we met up with some of my father’s former pupils from Malay College. They are now all in their 70s, but the years fell away as they recounted some fond memories of my parents and stories about their schooldays over lunch at Kuala Lumpur’s exclusive Lake Club. The get-together had been arranged by Ariff Shaffie, one of several MC old boys who still exchanges Christmas cards with my mother and who, with his English wife Jo, were kind enough to take us under their wing for the next leg of our Malaysian odyssey.

The couple were in KL for their granddaughter’s birthday party and offered to drive us to their home town of Ipoh, about 200km north of KL. It’s also where my brother was born and, as it’s the largest town close to Malay College, most of my parents’ social life was spent there, with the expat community.

At the Royal Ipoh Club, Ariff had arranged for us to spend the night in one of the rooms reserved for members and their guests, and we dined in the club’s beautiful colonial-style dining room, as well as had a few drinks at the famous Long Bar, where my mum and dad would almost certainly have enjoyed the odd pink gin.

They certainly enjoyed one of the club’s most famous drinks to the extent of bringing the recipe home with them to Belfast, where it became a familiar summer cocktail of my childhood. The Gunner – non-alcoholic, I should add – originated in the colonies during the days of the Empire and is a blend of ginger beer, ginger ale and a dash of Angostura bitters, topped off with a squeeze of lime juice. And it was every bit as good as I had remembered it, with my usual choice of a cold beer not quite measuring up in the refreshment stakes. 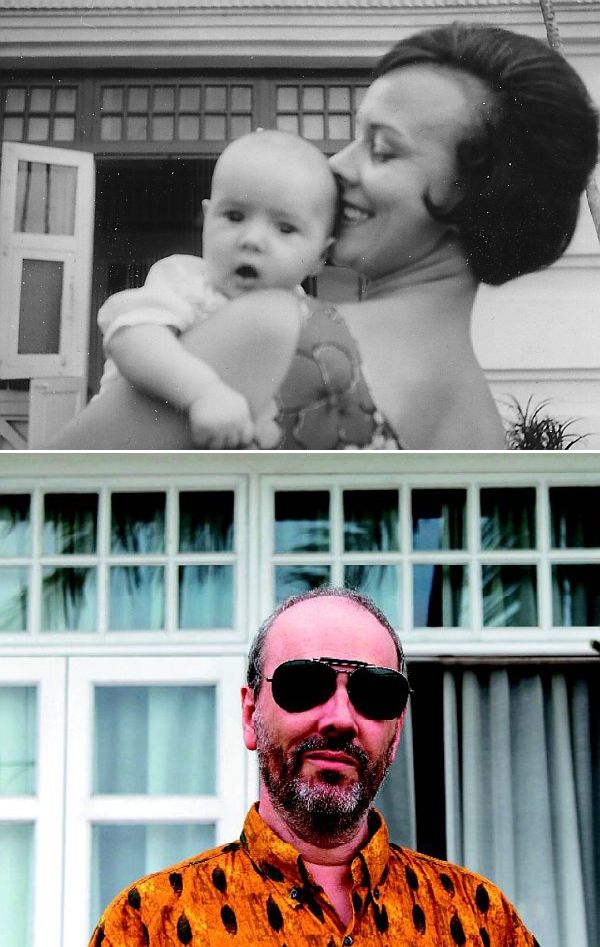 Baby Patric and mother Stella outside E&O Hotel, Penang in 1963. And the writer, 51 years later at the same venue.


The following day, Ariff had arranged for us to visit Malay College, a short drive away in Kuala Kangsar. We were met by the assistant headmaster, who gave us a guided tour of the grounds and buildings, many of which were familiar to me from old photographs of my father with the school’s rugby team.

Their house which stood in the school grounds had long since been demolished to make way for sports pitches, but the school’s famous Big Tree still stood in front of the main building, both looking just as impressive as they did in my father’s photographs taken over half-a-century ago.

Kuala Kangsar is a very pretty town, featuring a mix of colonial and traditional architecture. It’s where the very first of Malaya’s many millions of rubber trees was planted, still standing on the grounds of the city hall, and other landmarks include Istana Iskandariah – the Sultan of Perak’s ornate palace, the gold-topped minarets of the Ubudiah Mosque and the town centre’s famous clock tower which serves as one of the most unusual traffic roundabouts I have seen.

From Ipoh we departed for the nearby Cameron Highlands, once a favourite weekend retreat for most of the local ex-pat community during a time before the advent of air-conditioning, and now a popular destination for holidaymakers from all over the world. We spent several nights at the Cameron Highlands Resort hotel near Tanah Rata, an impressive colonial-style building dating from 1938 and the area’s most luxurious property.

Due to the high altitude, the air is very much cooler and less humid than at sea-level and also has the perfect climate for the cultivation of tea, with most of the surrounding land owned by the BOH tea company. We took a tour of the factory and were amazed to see most of the original machinery, dating from the 1930s still used in the production of the world-famous tea. What amazed us even more was that the guide informed us that the huge, cast iron tea processing machines, which bore the name “Sirocco”, had been manufactured in and transported to the factory from Belfast.

The final leg of our trip – and the most important to me – was to my birthplace of Penang island.

A five-hour bus journey from the Cameron Highlands wasn’t as gruelling as I had imagined. The accompanying scenery of verdant forests and jungle was stunning and, as the bus drove across the 13.6km-long bridge into George Town, Penang’s capital and a Unesco World Heritage Site since 2008, the sun was just setting behind Penang Hill and I could see the city’s lights and buildings beginning to emerge from the humid sea mist.

In the taxi from the bus station on our way to the beach resort of Batu Ferringhi on the island’s north coast, we passed by the gates of Penang Free School, close to the site of our old family home, which was now occupied by the huge Masjid Negeri. Just before reaching the hotel, we drove past the resort’s busy night market, dodging tourist rickshaws and the patrons of the roadside hawker stalls, selling just about everything from knock-off handbags to fried noodles. While checking in to the Golden Sands hotel, the clerk had noticed Penang as the place of birth stated on my passport. “Welcome home, sir,” he remarked casually. “Are you here for business or pleasure?”

Well, I certainly had some outstanding business to take care of. My original Malaysian birth certificate was in imminent danger of crumbling into dust, so I had planned a trip to Penang’s office of births, deaths and marriage registration to try and seek a replacement. As duplicates can only be issued in person, an afternoon was spent queuing alongside locals, attempting to fill in numerous forms in Malay and answering questions posed by bemused officials finally achieved the desired result.

Another essential task was a visit to the splendid Eastern & Oriental hotel in George Town where my parents spent their last night before boarding a ship bound for England and leaving their old lives behind; there is an old photograph of me as a baby in my mother’s arms taken in the hotel’s grounds and I wanted to see the exact spot for myself. The manager was extremely accommodating and my final mission was accomplished.

In a rather reflective mood on my birthday, I took one last walk near the hospital where I was born and, even despite the oppressive mid-afternoon heat, the confusing mix of Malay and English names for streets lined with a surreal juxtaposition of old, crumbling Chinese shop houses, ornate Indian temples and ultra-modern high-rise buildings and with the almost overwhelming smell of incense and pungent aromas from street corner food stalls wafting in my nostrils, I thought to myself, “Penang, it’s been a pleasure.” 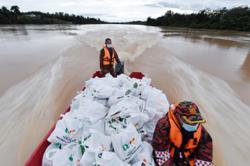