According to campaign group Girls Not Brides, 21% of girls in Pakistan are married before their 18th birthday. It has the sixth-highest number of child brides in the world. Filepic by AFP

Pakistani police have rescued a missing Christian teenager who was allegedly forced to convert to Islam and marry a 44-year-old Muslim man, her family said. The case sparked street protests and outrage on social media.

A court in the city of Karachi ordered police to free the 13-year-old and arrest the man three weeks after she disappeared following appeals by women's rights and Christian organisations for authorities to act.

Police took the girl to a women's shelter in Karachi where she will stay until a court hearing on Thursday, said Jibran Nasir, her parent's lawyer. The man, a neighbour of the family, was due to appear in court on Wednesday.

Nasir said he hoped the girl's school and government records would be enough evidence to prove her age and "for the court to determine that she was a minor".

Sindh's High Court initially accepted statements from the girl that she was 18 - the legal marriage age in the province, and had willingly converted to Islam and wed, sparking protests in Karachi by Christian groups and rights campaigners.

"My husband went to the police and reported her missing... but they did nothing," the girl's mother Rita Raja said at Karachi's Holy Trinity Cathedral, where the family has been seeking refuge since her Oct 13 disappearance.

"Two days later the police put a marriage certificate in my husband's hand stating she had married," Raja said.

Last week, a video of Raja crying and pleading to see her daughter outside the arrested man's house went viral on social media.

Campaigners say forced conversion and marriage of girls and woman from minority religions, including Hindus and Christians, is a growing problem in Muslim-majority Pakistan, with those from poor families and low castes largely targeted.

Last year, the alleged abduction and forced conversion of two Hindu sisters made headlines in Pakistan when a video of their marriages was shared widely on social media.

According to campaign group Girls Not Brides, 21% of girls in Pakistan are married before their 18th birthday. It has the sixth-highest number of child brides in the world at nearly two million, United Nations children's agency Unicef data shows. - Thomson Reuters Foundation

Budget 2021 must make Malaysia a better country for women

Over 50% of women have been harassed and judged at work, survey finds 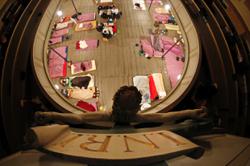 A pregnancy test for the visually impaired
Old school: German great-grandpa pitches in with homeschooling
Starchild: Malaysian children design their own postcards
Bangladeshi vows to fight bar on women conducting weddings
MCO: Time to start your dream home-improvement project
YouTube sensation Uncle Roger back in Malaysia to see parents
Women put off by macho language in job adverts
Deaths of unwed mothers and babies caused by 'perverse' morality, says Irish PM
Keeping the Ponggal traditon alive despite MCO
MCO: Bracing for a CNY away from family