Don't mess with the virus

Jackson, 47, wants people to take the virus seriously and not try to rush back to normal. Photos: Cortlynn Stark/Kansas City Star/TNS

The pain was worse than childbirth. Stacy Jackson given birth five times. She’s not being dramatic. She could barely breathe.

Two of her uncles also later tested positive and were hospitalised. One of them, Marvin Jackson, died.

After nearly being placed on a ventilator, her kidneys beginning to fail, and spending five days unconscious, Jackson survived.

Now she has a warning for Kansas City: Don’t rush to go back to normal. It doesn’t exist.

By the 26th, she tried to see her primary care physician. Staff asked Jackson, who also has Type 2 diabetes, over the phone if she was running a temperature. Jackson didn’t know, so staff came out with a thermometer to take her temperature.

Her doctor couldn’t see her.

From there, she went to the emergency room at Truman Medical Center. She was given a cocktail of drugs to help, what she called the "Covid super pack, ” and a test for the coronavirus. Her test results would be ready in two days.

March 27 was her 21st wedding anniversary. Jackson and her husband had already taken the day off. She spent the day in bed, sick. She lost her senses of taste and smell. Her appetite was gone. Jackson spent the next day in bed as well.

Two days after her anniversary, she received her positive test result. Her condition continued to deteriorate and she went back to the hospital for a couple hours.

“I was scared to death, ” Jackson said.

It was still in the early days of the virus in Kansas City. Fewer than 300 people had tested positive in the metro and no one in the city had died of it, according to statistics tracked by The Star.

By March 31, Jackson was struggling to breathe. Nearly 500 people across the metro had tested positive. Jackson was terrified when she tested positive for the virus. But she was determined to come out strong.

“I just told myself, ‘you’re not gonna die, ’” Jackson said.

She told her husband he had to take her back to the hospital. He dropped her off outside. He couldn’t go in, of course. Health care facilities had already begun limiting visitors.

Jackson said she thinks the lack of oxygen took a toll on her brain as the disease took its toll on her mentally and physically.

She was placed in the ICU and was in and out of consciousness from March 31 to April 4. Sometime during those five days, she became aware of two doctors in her room talking to each other: She may have to be put on a ventilator.

“I remember shaking my head no, ” Jackson said. In a phone call a month later, she said she worried that if she was put on a ventilator, she wouldn’t survive.

A study of patients in a New York placed on ventilators found that just 3% left the hospital alive. A quarter of them died. About 72% were still in the hospital.

On April 5, her fever broke and she started becoming more responsive. But every time she got up, “it was like running around Kansas City seven times, ” Jackson said. By this time, more than 700 people tested positive in the metro.

For the first time since March 31st, she was able to call her husband. But talking was still painful.

Jackson is used to being surrounded by family.

But she hadn’t seen her mother since before Kansas City’s stay-at-home order went into effect on March 24. The month before, her mother, who lives at an assisted living facility in Overland Park, was in the hospital battling the flu and pneumonia. Jackson was by her side.

“We are a face to face family, ” Jackson said. “When people are stricken with disease in our family, we pray together.”

But no one could be by her side. Or the sides of her two sick uncles.

Covid-19 is isolating. Instead of family members by her hospital bed, she was surrounded by nurses and doctors — genuine and caring, she said — covered in personal protective equipment. One nurse, Jackson said, told her that if she left the hospital, she would be one of the first to leave the Covid-19 dedicated floor alive. For survivors like Jackson, life has become more valuable and they aren't for life to return to pre-covid normal. Photo:AP

Her uncle Marvin Jackson died on April 23 — one of three to die that day and one of 106 people to die across the metro since the outbreak began.

When Jackson left the hospital on April 8, staff played the “Rocky” theme song for her. At home, four of her six children and her husband were waiting for her.

Her oldest two children have their own apartments in Kansas City. The middle two were home from college. Her youngest, twin boys, are seniors in high school.

She was on oxygen support for two weeks.

But she’s worried about reopening.

Beginning May 15, Kansas City businesses can reopen under a “10/10/10” rule. In Kansas, Gov. Laura Kelly’s phased reopening plan last week includes rules that businesses opening must maintain 2m separation between customers and limit gatherings to less than 10. On the Missouri side, Gov. Mike Parson ordered businesses to maintain social distancing, but did not limit social gatherings.

“We’re risking millions of lives for comfortability, ” Jackson said. “We need to stop the madness. I would rather have a light bill that I can’t pay than lose my life.”

She wants people to take the virus seriously and respect the severity.

With most of her immediate and large family in the Kansas City area, they often have large gatherings of up to 45 people at her home. Social distancing is the new normal, even in parks like this one in Queens, New York. Photo: AFP

Jackson said her family would often rent out four tables at a Japanese steakhouse on the County Club Plaza.

And even though she has cable, and a number of streaming services, she would still go to movie theaters.

“We can’t go back to the way it was, ” Jackson said. “I don’t know when I’ll be able to go back to a restaurant and feel safe.”

“I value life a little bit more and how precious life is, ” Jackson said. “We could be gone in the blink of an eye. ... We need to do everything in our power not to make it worse.”

Jackson is thankful to be alive. – The Kansas City Star/Tribune News Service 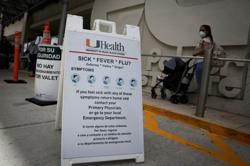 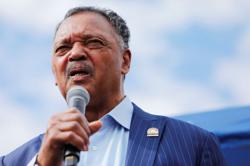 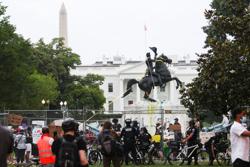