Help available for abuse victims during the MCO

Domestic violence is about maintaining power and control, and in the uncertain and unprecedented times we are facing, the desire to exert control may be aggravated by isolation and concerns over health and finances, says Tan. Photo: 123rf.com

A few nights ago, the police rescued a woman who was being abused by her husband. The victim had reached out to the Women’s Aid Organisation (WAO), a non-government organisation that helps victims of violence, to report that her husband was beating her.

“We contacted the Bukit Aman police station and they dispatched their personel to her house immediately. She was rescued and the perpetrator was taken to the lock-up immediately, says WAO social worker Gunawathi Ramachandran, who responded to the case.

“The perpetrator was taken by surprise and was not able to leave. The police were quick and,

according to the victim, very helpful. She is now in a shelter, ” she adds.

For victims of domestic violence, home is not a safe place.

In fact, it is the most terrifying and dangerous place to be in.The movement control order (MCO) - though urgently needed to curb the spread of Covid-19 - render women and children living with an abusive spouse or parent extremely vulnerable to harm, as they are confined together for days and have little physical contact with others. 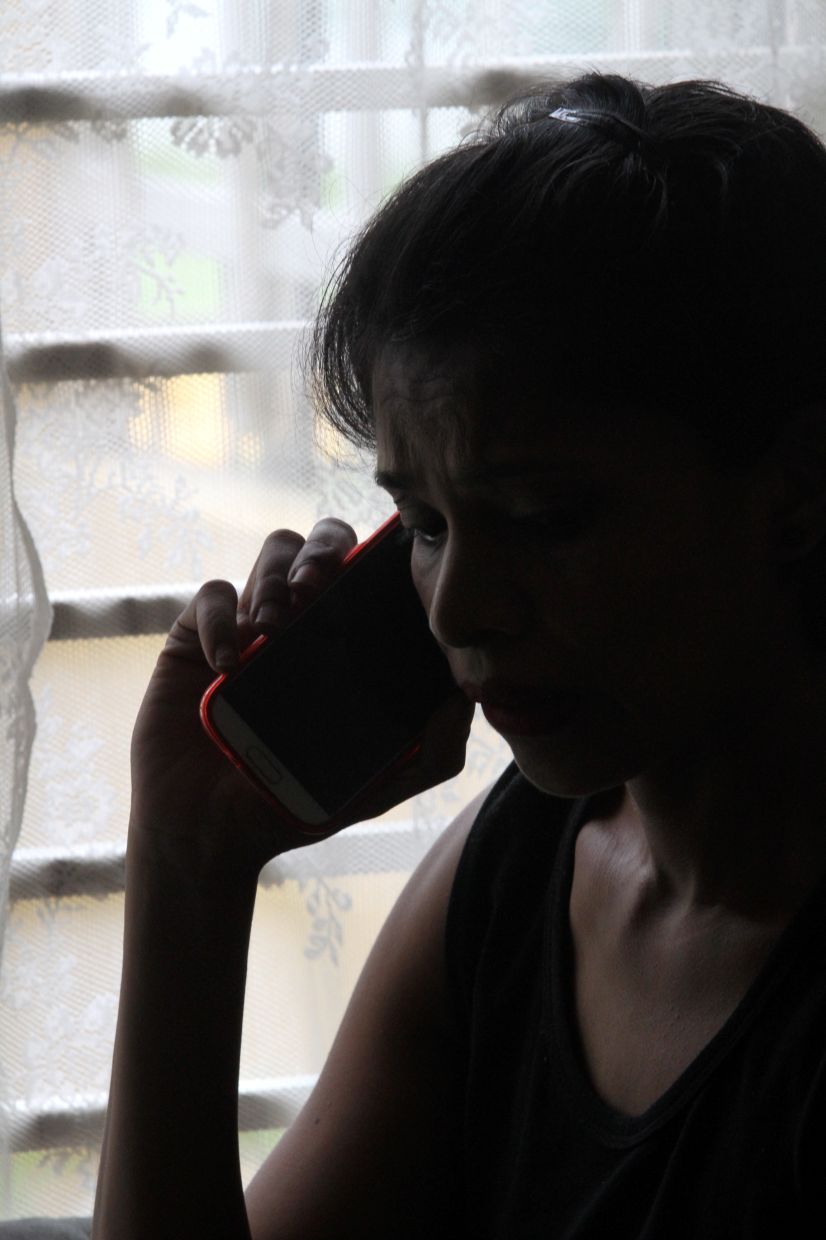 Social workers and non-government organisations who work with victims of violence are worried because they know, from data and research, that violence spikes in crisis situations such as disasters, war and pandemics such as this.

In just a week of the MCO, WAO has recorded a drop in the number of calls to their hotline. It’s not a good sign because it signals what they fear most: victims aren’t able to reach help.

“We’re actually seeing a decrease in calls and we suspect it could be because survivors are with the perpetrator all day and it can be harder and more dangerous for them to seek help, ” says WAO advocacy officer, Tan Heang-Lee.

Victims of violence usually wait until they are on their own before they seek help - when their spouses are at work, or when their children are at school or childcare or when they are at work. They don’t have this option anymore as their abuser is at home all day. It is also common for abusers to monitor the phones of their victims and so, any attempt to call or text for help could be dangerous for the victim.

A spike in domestic violence was recorded in China. During their lockdown period the hashtag #antidomesticviolenceduringepidemic began trending on the chinese social media platform Sina Webo.

Factors that can exacerbate these numbers include added financial pressures that come from the loss of income, the sudden close confinement of families and less community contact.

But abusers don’t just perpetrate violence because of these stresses alone. 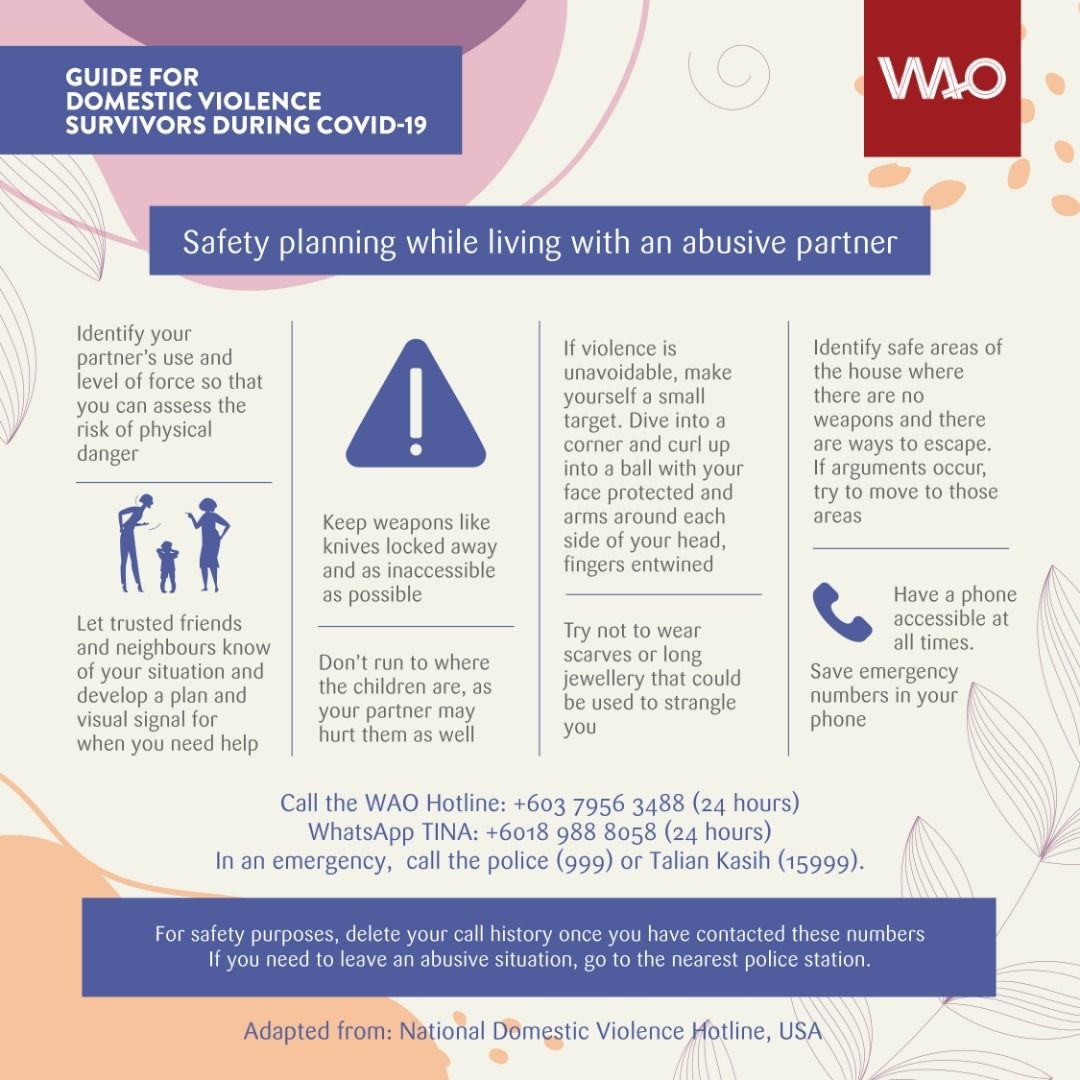 It is an existing pattern of power and control that manifests more when their victims are isolated.

“Domestic violence is about maintaining power and control, and in the uncertain and unprecedented times we are facing, this desire to exert control may be aggravated by isolation and concerns over health and finances.

“Leaving an abusive situation is difficult enough during ordinary times, with many survivors not having the resources or social network to be able to support themselves and their children. Often, this financial and social dependence is itself part of the pattern of violence. But leaving has become far harder during this pandemic, ” says Tan.

Now, more than ever, is the time for communities to step up. Although no one is allowed to go out unnecessarily, social workers are urging relatives, friends and neighbours to check in on anyone they suspect may be vulnerable to abuse.

“If you don’t know the number of the police or any NGO, just call 999, ” says Gunawathi, adding that the police are ready to act and will rescue victims.

Abuse, she reiterates, is not only be physical but can also be verbal, emotional and psychological: insults, put downs, prohibitions.

“Now, more than ever, communities must not turn a blind eye to those in need.

“Whether by remaining vigilant and passing information about critical resources to a friend we suspect is being abused, agreeing on a plan or visual signal to help a neighbour escape if violence escalates or simply calling or texting to check in on someone who does not have a large social network to let them know they are not alone there is a lot each of us can do even from our homes to help ensure the safety of domestic violence survivors in their homes, ” says Tan.

She's blind but she sees the world as a beautiful place