CrossFit is not just for the young, as seniors can do it too

CrossFit isn’t for the faint-hearted: aggressive and rigorous workouts that push you to the brink of fitness or tears... or both. At least, that seems to be the reputation built around the fitness regime that has been persistently gaining popularity since it was first introduced in 2000 in the United States.

But, CrossFit certified coach Madhusudhan Aravindhakshan wishes to correct the misconception that CrossFit workouts are just for the fit or the young.

And that’s what led him to introduce CrossFit 55+, a class for seniors above 55 at CrossFit Vidatha, the gym (or box, as what CrossFit gyms are known as) he runs in Kuala Lumpur.

“I believe that CrossFit is meant for everyone. Unfortunately, the publicity that CrossFit gets on social media, especially, tends to centre around guys and girls who are already fit. Then there is also the hype about CrossFit athletes who, like in any sport, are actually just a small percentage of those who do CrossFit. Crossfit isn't just for the young and fit but rather, it's focus on functional movements makes it ideal for seniors.“Actually, CrossFit is meant for people who need it: to get people off the couch, for those recovering from an injury and also for senior citizens, ” he says.

CrossFit, Madhusudhan says, is great for senior citizens as training focuses on functional movements that are part of everyday living: squatting, lifting, getting up, bending down and so on.

“I think it is more for seniors than anyone else because youngsters move around a lot anyway. Or at least we should. Senior citizens often need avenues that will help them move and increase their mobility and balance, ” shares Madhusudhan.

CrossFit training combines various aspects of fitness – basic gymnastics, weighlifting and endurance and the exercises for seniors are the same you’d find in any CrossFit box anywhere in the world.

The only difference in the seniors’ class is that the movements accommodate the fitness levels and physical limitations of the participants: lighter weights, controlled movements and a slower pace.

CrossFit isn’t a specialised sport but rather, a variety of movements that are repeated.

“That’s what life is, right?” says Madhu. “Essentially in fitness and movement, all of us need to do the same thing. We still need to lie down and get up. We need to pick things off the floor or lift things up, whether we are old or young.

“CrossFit trains us in these functional movements that we perform in everyday life. Of course, the difficulty degree will be different between an elite level athlete and seniors who will use lighter weights and movements that are more controlled.”

Although small – the class sizes range from three to eight people – the seniors’ class has been successful in improving the mobility of its participants.

Retiree Zahiah Mohamed, 58, has been coming for the classes for over a year and though she sometimes gripes about the movements that Coach Madhu (as he is known) makes them do, she keeps coming back.

“I started coming after I retired. I think these classes are great for seniors. As we get older, we don’t move about as much so these classes can help us increase our mobility and allow us to go about our daily life feeling better.

“That’s why I started coming... I want to be able to play with my cucu. It’s tiring, of course, but I definitely feel stronger and have increased mobility. I can do a lot more things although I still have aches and pains when I wake up in a morning, ” says Zahiah. Though they sometimes complain about the exercises they have to do, the seniors say that their mobility has improved.

In the seniors’ class, the oldest student is 80 years old and the youngest, 58.

“I am 80 and I am carrying lighter weights now because I am just recovering from a broken arm, ” shares Aravindhakshan.

“I live in Melaka but I drive up to KL with my wife for the classes every Wednesday because we enjoy it.

“I used to be an active sportsman and I played rugby for the police force when I was younger. But, with age and injuries sustained over the years, I am not able to do what I used to do 60 years ago. It’s nice to be able to work out with people who are around our age, ” says the retired police officer and practising criminal lawyer.

Aravindhakshan and Lim Siew Wan, 62, are Madhu’s parents and though they are regulars now, it took some convincing to get them to join the classes.

“I started the gym seven years ago but they only started coming this year, ” says Madhu.

“I enjoy it very much now and if I lived here, I’d come for classes daily, ” says Lim, who is a Bharatanatyam (Indian classical dance) teacher in Melaka. 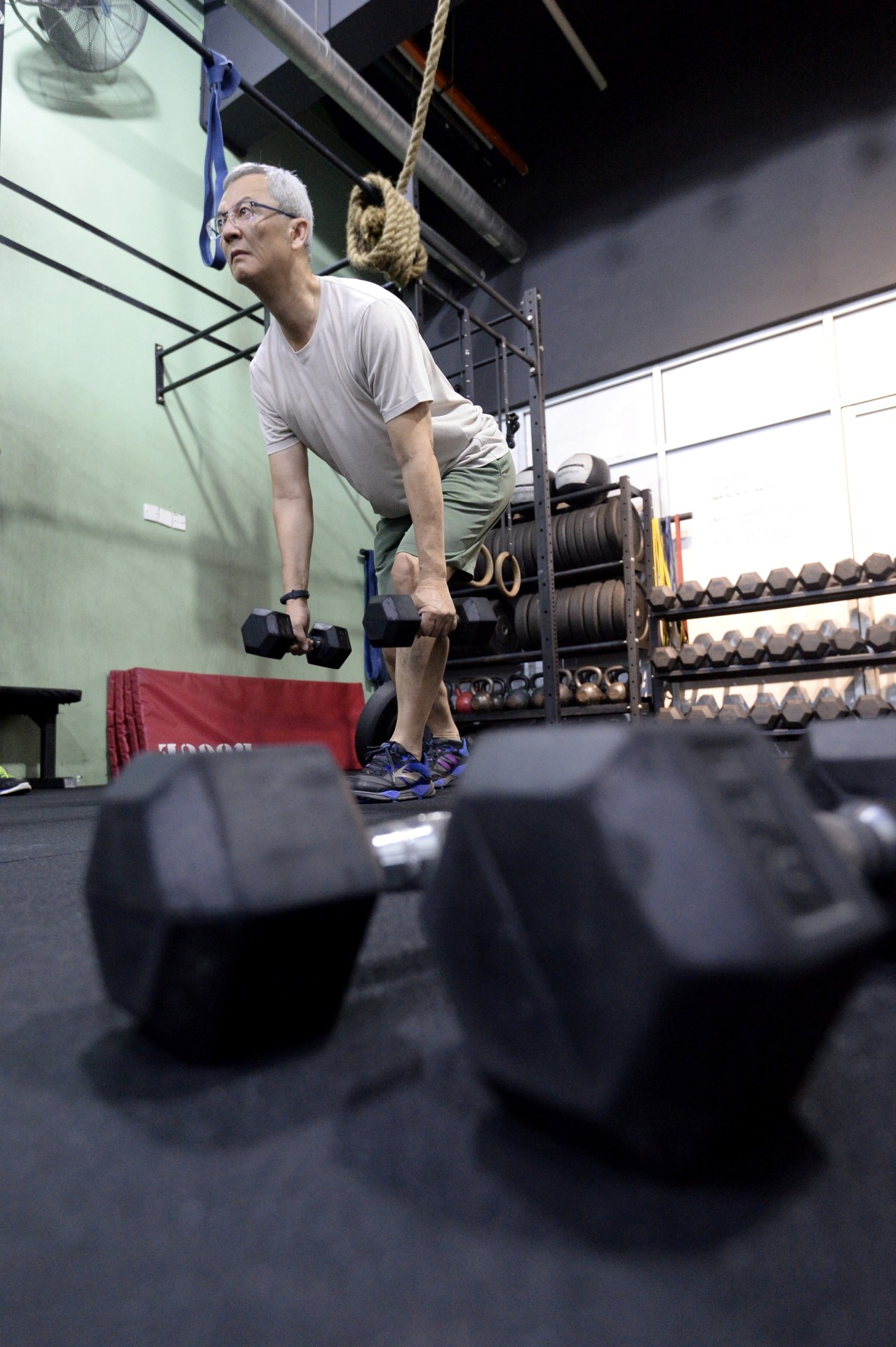 Sia says he that he needs to stay healthy and fit for the sake of his young family.

For most of these seniors, building their strength and fitness is a means of remaining independent for as long as possible.

“We have all heard about financial freedom, right? Well, staying fit and active will give me health freedom. The Crossfit class is something different from his usual exercise routine. I don’t want to have to depend on people in my old age and so I swim and jog twice a week.

“A couple of months ago, I joined this Crossfit class as it is a good way to build my strength. I have quite a young family and so I need to keep myself healthy, ” says 61-year-old Sia Chay Thiam.