Dear Thelma: I hurt a friend badly by leading him on

I messed up. I hurt a friend really badly, and it’s eating away at me. Not only that, my current situation is just making it worse.

A few months ago, a friend of mine called A confessed his feelings to me but I turned him down gently. He took it with good grace and we remained good friends.

However, that incident brought us closer together and I began to realise that my feelings for him were starting to change. They were not feelings of love, but they were enough to convince me that perhaps, for the first time in my life, I should try a relationship.

I confessed my feelings to him and he was shocked. It was unfair of me, I know that now, as he was in the midst of moving on successfully. However, he accepted my confession and we decided to try it out.

When I told my parents about it, they were not supportive. They began to bring up issues and concerns, and I began to doubt the relationship. As a result, I asked A if it was okay that we were not serious. He said yes.

On Valentine’s Day, he gave me chocolates and with it came a very strong reaffirmation of his feelings. I freaked out.

My parents’ doubts, along with those of my own, had lessened my confidence in our relationship and, in turn, lessened my feelings. I reiterated that we weren’t serious. He said it was OK. All this was done over text messages.

Then a month ago, I met someone else. Let’s call him B. Thelma, if there was anyone who could make me experience that movie-like romance in real life, it was B.

Falling head over heels is the only way I can describe what I have with B. We get along so well and we can talk for hours until he misses the bus. I have liked many guys in my life, but not as much as I do B, and definitely not as strongly.

I pride myself on being sensible when it comes to romance, to be logical over everything else, and yet I am also constantly asking myself if this is it, if this is about the big “L” word.

Of course it’s too early to say yet, but what I do know is that with B, there is none of those doubts I had with A. And that if my parents question him, as they will undoubtedly do, I will fight for him and for us.

There was no way to go around it but to talk to A. I was inconsiderate and selfish, I know that now, to assume that A was on the same page as me. Because it turned out that he wasn’t and he was really into us. To him, the relationship was not casual at all.

It was bad. I hurt him very badly when I told him we weren’t serious on that Valentine’s Day. And I regret it so much now, because I know that it was not the right thing to do, at all.

The “we weren’t serious” conversation shouldn’t have happened over text. I should not have left him hanging with no closure. And maybe I shouldn’t even have tried the relationship in the first place when I wasn’t 100% sure at all.

I never lied to A about my feelings. I did really like him enough to finally be brave and try a relationship for the first time. But what I didn’t do was to tell him properly that my feelings had faded. And most importantly, I took too lightly the magnitude of his feelings for me, as well as the doubts that were there right from the beginning.

Nothing can justify my actions. I know I am in the wrong and I am not seeking for an excuse. But what I want so desperately to know now is, what should I do? I told B everything and he agreed that I had made a mistake.

He said that we could take our time until I was OK with us. Because right now, as much as I love spending time with B, the guilt I feel over A is always there in the background.

Although I liked B after I had stopped liking A, A doesn’t know that. Or at least, I don’t think he believes me. To A, it is impossible to feel so strongly about someone after just a month.

What do I do now, Thelma? Do I pause my relationship with B until I have gone through some sort of of period of atonement? Is it right to let my mistake with A affect what I have with B? What can I do to help A, because he was after all, my good friend in the very first place?

I’m not sure how old you are but as this is your first experience of love and dating, I’m guessing you’re a teenager. That’s important because dating etiquette depends a lot on age.

When you’ve never been in love, the emotions that come with it can be overwhelming. That’s why so many people who decide in advance they will be practical about it are hit for six.

So, are you an awful person for not knowing your own mind? Ask yourself, should people only date when they are totally committed and definitely going to marry? Answer: Chatting, going out and giving each other chocolates don’t mean we have to be partners for life.

Dating exists so that we can see if we’re a good match. So, we date for as long as we like, and when it doesn’t work anymore, we say so.

Delivering bad news face to face shows respect and it allows for proper conversation. However, it’s painful, which is why so many people resort to text. Is it wrong? No, but it can be a bit abrupt.

Also, you chose Valentine’s Day which was careless. You didn’t do a great job but it’s your first breakup, so stop agonising. Learn from it and move on.

Now you’ve met another boy and you’ve a crush on him. That’s a very heady experience and with added inexperience and hormones, it’s a wild combination.

Enjoying a romance is terrific but please drop all that stuff about fighting for love and atonement.

You’re chatting to a boy, not living in a soap opera. Take a breath and dial back the drama.

Your good sense should remind you that relationship success is founded on honesty: You have to be open about your feelings and not mess people about.

Tell A you wish you’d handled it better and that you want to be friends. If he says he’s not ready, respect that.

As for B, you are way too young to even think about marriage.

Just be friends, go out and enjoy yourself. There will likely be lots of boys, so be nice to them, never cheat, and when it’s time to move on, break up gently.

Is something bothering you? Do you need a listening ear or a shoulder to lean on? Thelma is here to help.  Email star2.thelma@thestar.com.my or write to Dear Thelma, c/o StarLifestyle, Menara Star, 15, Jalan 16/11, 46350 Petaling Jaya, Selangor. Please include your full name and address, and a pseudonym. No private correspondence will be entertained. The Star does not give any warranty on accuracy, completeness, usefulness, fitness for any particular purpose or other assurances as to the opinions and views expressed in this column. The Star disclaims all responsibility for any losses suffered directly or indirectly arising from reliance on such opinions and views.

Dear Thelma: I hurt a friend badly by leading him on

Dear Thelma: I gave her everything but she dumped me 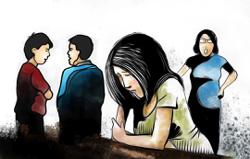 Dear Thelma: His parents object to our relationship. Should I leave him?